The day of your long anticipated job interview has arrived and you’ve prepared your lines, researched the company thoroughly and picked out an outfit that makes you feel invincible. And then it happens; your hands are suddenly clammy, your heart is racing and all your well-rehearsed answers seem to stick in the back of your throat. Pre job interview nerves happen to the best of us, and they always seem to make an appearance when stakes are the highest. But hopefully with the following ten tips you can get your frazzled nerves under control and make it through your interview without a hitch. 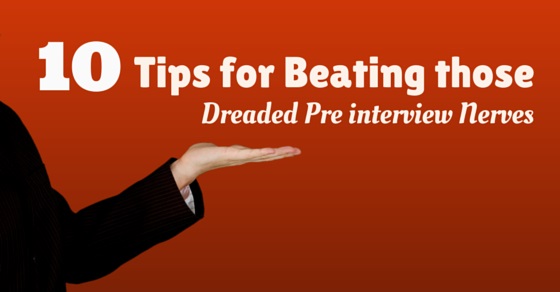 1. Prepare as much as you can:

The more prepared you are, the less you’ll have to worry about. Aside from researching the company and preparing answers to common job interview questions, try to visit the site where the interview will take place a day or two in advance. This way, you’ll know how long it takes to get there and won’t have any trouble finding it on the day of your interview. Visiting the company beforehand will also give you a chance to get a feel for the work environment and plan your outfit accordingly.

2. Eat a light breakfast and go easy on the caffeine:

Eating a huge breakfast the morning of your interview isn’t the best idea, but don’t go without eating either or you’ll end up feeling faint. A light breakfast like salmon on whole-wheat toast or fruit and yogurt will give you energy and help you focus without feeling bloated. Also avoid drinking too many caffeinated drinks beforehand as this can increase your jitters and even dehydrate you.

3. Build your confidence with a few power poses:

As silly as you may feel when doing it, research shows that holding yourself in a power pose for two minutes can boost your confidence by decreasing cortisol, which is responsible for stress, and increasing testosterone, which helps you feel more dominant. One pose you can try right before the interview without drawing too much attention to yourself is standing up tall and leaning slightly forward with your hands at your side.

Job seekers are often advised to arrive early to their interview, but sitting in a waiting area twiddling your thumbs for 15 minutes or more can be super nerve-wracking.
Of course it’s important to plan in some extra travel time in case of any unexpected delays, but if you arrive with plenty of time to spare, rather than going straight to the reception and hanging around feeling nervous, why not head to a nearby café and look over your notes or take a walk around the block to relax and clear your head?

5. Make an effort to smile:

When you’re feeling nervous it’s easy to look stern or unapproachable without even realizing it, so make an effort to smile, both before and during your job interview. Research has shown that smiling can actually influence our physical state and reduce stress levels, and even if you’re not feeling particularly cheerful, forcing a smile can kill those nerves and help you relax.

6. Pause and take a breath before you speak:

Rather than blurting out the first thing that comes to mind when you’re asked a question, take a deep breath and pause while you gather your thoughts. The intake of oxygen can help calm your nerves and the brief pause will give you some time to think about the question and how you want to answer it.

When we’re nervous we tend to speak more quickly without even realizing it, so job seekers are often advised to speak more slowly during an interview. Unfortunately, this can be problematic too, as a recent study revealed. The researchers found that when interviewees spoke more slowly, they were assumed to be more nervous, and as a result, they were less likely to be hired.

So what’s an interviewee to do? Rather than focusing on how quickly you’re speaking, pay attention to your interviewer’s tone of voice, volume and manner of speaking. Then, if possible, try to match your way of speaking to theirs.

8. Squeeze your buttocks together to combat the shakes:

Do you ever get the shakes when you’re feeling particularly anxious? As crazy as it may sound, clenching your buttocks together can prevent your hands from trembling and clueing your interviewer in to fact that you’re nervous. This is the same technique many public speakers use to suppress their nerves and gain more control over the situation, and if it works for them it can work for you too.

9. Fold your hands in front of you to avoid fidgeting:

Fidgeting makes you seem nervous and it can even give an interviewer the impression that you’re not paying attention. One survey of hiring managers even found that 26% of job applicants are rejected just for fidgeting too much.

Try folding your hands in your lap or on the table in front of you, but if the thought of having nothing to do with your hands the entire meeting is too overwhelming, bring along a notepad and pen and take notes at intervals throughout the interview. Just don’t get so caught up with the paper in front of you that you forget to make eye contact and show interest in what your interviewer is saying.

Being prepared is important, but don’t over think every little thing that happens or could happen or you’ll drive yourself crazy. Your interviewer is a mere mortal like yourself, and the worst thing that could possibly happen is that you never see or hear from them again.

A job interview is not an interrogation and there are no “right” answers, so just be yourself and remember that this is just as much a chance for you to see whether you like the company and its culture as it is for them to decide if they want to bring you on board.

Author Bio: This is a Guest Post by Marianne Stenger, who is a writer with Open Colleges, one of Australia’s leading online education providers. She covers everything from life hacks and career development to learning tips and the latest research in education. You can connect with her on Google+ and Twitter.