To bag a job, facing an interview is an absolute must. Even people who have many years of experience don’t go for an interview as they do get nervous before an interview.

Many times it might just happen that you do not feel like going for an interview, simply because you believe that you are bagging another job or because you feel that this job is not offering you much, yet you should go for the interview.

This might sound like an absurd thing to many readers, but given here are some of the main reasons why a person should go for an interview even if they do not want to. 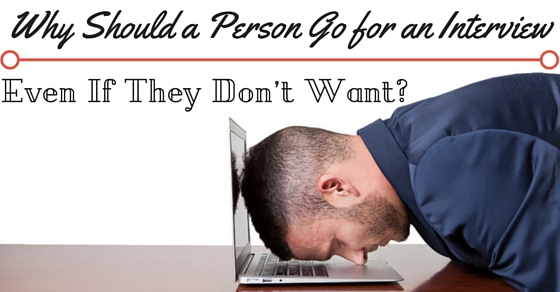 Why Go for an Interview?

1. Appearing for interviews is most beneficial for newcomers:

Most often it is usually the newcomers, who do not want to appear for an interview, simply because they know for a fact that they will not be able to bag the job and they think that the entire exercise will be a waste of time.

However what newcomers do not realize is that it is only when they appear for interviews and interact with recruiters, that they will be able to gauge what is expected of them and whether or not they have chosen the right field for themselves.

You never know when a company might be looking for a fresh young mind just like yours, so that is why you should never let negative thoughts influence your actions.

2. It will teach you to think on your feet:

Once you appear for several interviews, you will be able to start properly thinking on your feet. Usually, almost all youngsters mess up their first interview because they are inexperienced and tense.

It is often said that failure is a stepping stone towards success, so even if your first few interviews have been a disaster, you ought to pick yourself up and try again.

Even experienced individuals often mess up interviews because their nervousness gets to them. The more you appear for interviews, the more motivated you will get and over time you will surely be able to bag your dream job.

3. You will learn the art of putting your thoughts into words effectively:

No matter how badly you do not want to go for an interview, you should put your feelings aside and go for it. Think of an interview as a new challenge and just go for it, irrespective of the things which are holding you back and affecting your mind. Think of it this way that with each interview you go for, you will be learning to put your thoughts into words in a more effective manner.

To bag any excellent job, communication skills are an absolute must. So rather than thinking of any immediate gains, just think of all the things you will be achieved in the long run.

4. It helps in building contacts:

To survive in the business world, building a network is very important indeed. Being associated with one or two successful businessmen could be of great help to you in the time to come.

That is why even if you are thinking that going for the interview will not help you in any way, think again. Those who do not have a useful network or good contacts rarely make it big in the business world.

You never know when the boss of the company taking your interview, might be impressed by your skills and decide to offer you an even better position than the one you are interviewing for.

5. Enables you to know where you stand:

Very often it happens that we as individuals have our impressions of ourselves in our minds. For some overconfident people, they think themselves to be better than they are. On the other hand, some are excellent at what they do, but they are simply lacking in self confidence.

Going for an interview helps you to gain a little perspective and enables you to know just where you stand when it comes to your skills and abilities. Rather than trying to evaluate your skills, you should let others judge you instead. So hold your head up high and do what you think is best always.

6. You learn to deal with pressure well:

It often happens that pressure affects people rather negatively, yet once you go for interviews, you will learn to utilize this pressure to help you be more motivated and more focused.

The pressure is a part and parcel of life so the faster you learn to deal with it, the better it will be for you. If you crack under pressure, moving ahead in life will prove to be impossible for sure.

7. It will give you the chance to observe other candidates:

Interacting with other candidates will help you to understand where you stand. This having been said, never get too close to the other candidates, because after all, they are your contemporaries and even if you are not interested in getting the job, you should none the less maintain your decorum at all points in time.

8. You are bound to receive useful feedback:

During an interview, most often recruiters do give the interviewees some feedback or the other. So even if you do not want to go for the interview, you should go, so that you receive the feedback and work on your job skills.

No matter how old we turn, there is always room for growth and betterment. So it is vital to take such useful feedback in the positive spirit and become better over time. If you are stubborn in your ways and unable to let go of your bad habits, then no company will feel like hiring an individual like you.

9. There is no harm in just appearing for an interview:

The more interviews which you appear for, it is going to give you an edge over your other contemporaries. So even if you have an interview with a small company, be sure to appear for it, as it will serve you well, when you appear for bigger and more important job interviews in the future.

10. You will be acquainted with the kind of questions that are usually asked:

Though each interview is unique in its way, yet most often certain questions are always asked in the course of an interview. Interviewers are very smart and experienced individuals, they can ask the same questions in several ways. It is only when you appear for several interviews that you will be able to identify such nuances and alter your answers to suit the question.

In the course of an interview, the interviewers are checking your comprehension skills. Some questions which may baffle you initially include, ‘Where do you see yourself in five years?’ or “why did you apply for this job?’

11. Never make your judgments based on what others say:

Most often people choose not to go for interviews, simply because of what they have heard about the company from their friends or family members. However, rather than believing what others tell you, you should go and come to conclusions on your own.

In the business world, no one is your friend and many people do attempt to pass on false and incorrect information. Never be one of those individuals who blindly believe what others tell you, rather try and be a thinking person that comes to conclusions based on strong evidence.

12. You will get a chance to interact with the company employees:

One of the major reasons why going for an interview is so important is because it gives you the chance to interact with the employees of the company.

It is only when you interact with employees of the company that you will be able to understand how the company functions and whether the management is good or not.

13. Never pass off on an opportunity which presents itself:

Today even getting the opportunity of appearing for an interview is tough. So if you have managed to bag an interview, you should not let such a chance slip from your hands. Ask anyone in the business world and they will tell you, how in the world of economics, time means money.

If someone was not interested in giving you the job, they would have never called you in for an interview and wasted their precious time. If you have been called for an interview, the least you can do therefore is be present for it. Believe it or not, once you get a bad name, no company will hire you. News in the business world travels very fast.

14. It is a practice which makes one perfect:

Rather than reading things online or asking advice from people, the most effective way of understanding what companies want is by actually appearing for an interview and speaking with the company representatives.

There is some truth in the common saying, that practice makes perfect, so appear for as many interviews as you possibly can to understand just what is expected of you, in terms of mannerisms, dress and even words.

Not wanting to appear for an interview is all the more reason to go, simply because it allows you to play hard to get. Once a company knows that you have better job offers awaiting you, they will automatically value you much more. This having said, it does not mean that you act smugly or disrespectfully.

Many people do not appear for interviews, simply because they are lazy and convince themselves that they are content in their jobs. If you want to become something in life, it is advisable that you chase after your dreams and never settle for any ordinary jobs. Learn to think out of the box and be ready to be proactive no matter what opposition happens to present itself before you.

Given the present economic scenario across the world, bagging a job is a tough task indeed. Yet, based on the above reasons you should appear for as many interviews as you possibly can.

Appearing for an interview is an art in itself, which not many can master. It’s only when you put your best foot forward and try your hardest that you will learn the way of giving a good interview. Once you can create a good impression during your interview, that in itself half of the job done for you.