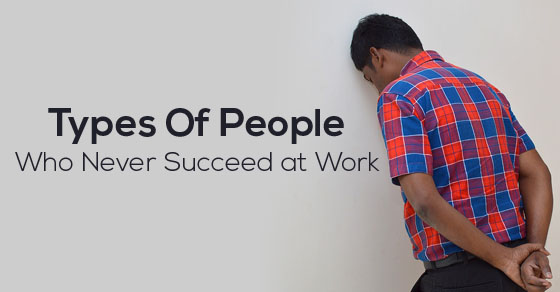 Every office is sure to have such a category of people. If you are their boss or mentor, then you tend to get annoyed at them every day. Its not very easy to segregate them from the successful ones. There are many types of people and you are sure to find these people or hand pick them in your department.

Think over it and you would be wondering how to make out those people in the department or in the organisation who never tasted success. They are people Some People Never Succeed at Work- Who are They:

In any workplace, there is always a specific group of people who do not know how to adopt changes or make changes. Even if they find the work is not able to be completed as per requirement or time, they do not want to make changes. You ask them and they would say that they have been doing this for a long time and don’t want to make the change. When something goes wrong they would just not worry as their reply would be that it is not their fault.

2. Who move from one job to another:

Such categories of people are always evident in many companies and organisations. Some individuals do not stay in a company for too long. Their intention is to stay as long as they learn something new that can be updated in their resume. They do that to experience a pay rise in their next job. But these individuals would not achieve anything.

These sort of people are found in every organisation. They do not perform as per given, instead, take pleasure in complaining. Their intention is to not allow progress. They complain about the work, about the resources, about any type of assignments given to them. Such people cannot get the work done satisfactorily. They spend more time on complaining rather than finding out ways for making progress.

While taking care of a project or assignment there is surely going to be a hitch or issue that needs to be solved. In case the person handling it doesn’t pay heed to it as they are more engrossed in completing the work, then the necessary corrections are not made. Even they don’t take efforts to inform the boss who would take it up later on. Individuals who drown themselves in their work and not heed to problems that are associated with it, is surely not making any progress.

This often happens when such people attend board meetings or office gathering or corporate meets. They seem to describe their activities with a touch of humour to it. But little do they know that they are only mocking at themselves in the face of the corporate and it undervalues them and their company.

Not all people working along with the boss are competent to take up the
work. But those who cannot do it, lie about it. These people are often not honest in their dealings and tend to hide the facts covering up reality. For instance when the boss requests his subordinates about the new project, if a wrong impression is given that everything is good then it wouldn’t help the progress. These people talk about things that the boss wants to hear.

7. Who are not realistic:

Not everything can be achieved without a truthful analysis of facts. Moreover disregarding facts is surely not part of success. People who are successful don’t wait for the opportunity to come. They are realistic in their approach and are aware that not everything can be achieved for free. Holding on to ‘hope’, to get you up the ladder is not the reality. Decisions come out only when there is honesty while confronting the facts.

Once the individual faces failure, then he/she believes that it would not work again. Not making an attempt once more will stop all thoughts about the idea. If the idea doesn’t work, they presume that it will never work. These people are having an unsuccessful mindset.

Carrying out job assignments requires the help of a team. Even if one of the member is doubtful about the end result, then you are screwed. These people wouldn’t allow the flow of thoughts and jeopardise the progress of the idea or thought. Any progress would bring success but such people hamper the next step ahead.

Scepticism needs to be there in small amounts like adding salt. Too much of scepticism is the main cause for unsuccessful people. Too little makes one feel optimistic while too much makes one pessimist. These people are too sceptic of any assignment success.

This category of people criticizes everything and anything that comes their way. They do not pay heed to what is being said. They turn a deaf ear to what others say. Without hearing to facts, conclusions are drawn as they haven’t listened to the whole fact about it. These people are also poor communicators. No one would seek advice or feedback from such people.

These people intimidate the people around them and seem to annoy others. People with an arrogant nature or attitude always feel they are better than others while taking decisions or at work. They cannot accommodate others opinions and create an arena of quarrels. In workplaces, these types of people create an uncomfortable atmosphere.

13. Who blames or makes excuses:

Most workplaces are witness to some category of people who point fingers at others when something goes wrong. They never accept the mistake and responsibility. If anything goes wrong or any mistake occurs these people are first to blame someone or something. If they are not able to complete the work, they easily make excuses.

No one likes to be around people who are negative or speak negatively always. You discuss any idea with them and they would discourage instead of being supportive. Their words are pointed towards failure that sucks out your energy. By speaking to them you drain out your positive energy. Negative people do not talk about possibilities or show potential.

Gossipers are people who feel insecure. These people do not speak out facts but rather twist the truth. As this information gets passed on, facts are wrong and due course hurts. Some people are cause for distractions within the team. Their thoughts are negative and spread rumours.

In a group of team or department, there is sure to one person who envies the success of the other. They don’t work themselves and also do not appreciate the good work. They feel that they are the only ones to be rewarded and no one else. They do not show appreciation towards other member’s hard work nor congratulate them on their success. When a failure is experienced by their peers they are on the top of the world. Even a word of support cannot be expected from them.

There are some people who feel that they know everything and know the best way to do everything. These people do not want to consider others opinions nor do they want to follow instructions. Such persons are considered as a nuisance within the team members as they don’t get along with the members. If they have to bring in the success they have to follow instructions or synchronise their thoughts along with others. But they won’t.

Like said earlier, those who are complaining and those who do not listen or are negative about their approach will only make them to be labelled as a non-team player. When they don’t associate with the other members of the team then such people do not succeed in their career. These people seem to never get along with other members. They also don’t understand that being in a team will help them to succeed at work.

Views of co-workers or boss are put to the discussion when a problem is encountered. It’s not that every time you agree but showing attitude of disagreement every time when an issue is put out shows that you are a negative person. These people have an aura of negativity around them which causes them to disagree.

If the person is not a team player then definitely he/she would be aiming to boast about oneself. Like they say blowing one’s trumpet is not going to bring in success. It has to be noticed by the boss or superior above him/her. No one really loves to talk to these people. They feel that they need to talk good about themselves always to gain the attention of the management.

There are some people who often are worried that they would lose their job or get fired. Fear of being blamed, fear of being called up for any mistake causes one to say lies or point fingers at others. This attitude would eventually make the person to tell lies or make excuses or shift the blame to someone else. These sort of people are not going to succeed at work.

Work inside a company or organisation is been executed due to the confidence of the people. But there are some individuals who always seem to have low profile. These people are considered an unconfident personality. Not having confidence is often associated with negativity. They don’t see the bright side of life. Hence, success does not come if the person is not confident in themselves.

We all know communication is important for anyone to move ahead in life. But using the right words and the right language is very critical. Some people have the habit of using foul language or inappropriate words that are not wanted by the management. These people use those words frequently to show disapproval. They are not aware that it hurts others. Being able to communicate in an appropriate language is required for being successful.

There are other categories of people who tend to be aggressive in their approach towards their counterparts. They have a tendency to show this nature to subdue the others. Such people are always angry or show anger in every aspect that does not match their opinions or liking. Having this attitude or personality is not favourable for getting up the corporate ladder.

As you can see that being successful is about sharing your aspects in the right way at the right place and right time. It’s an art that cannot be taught. It has to be practised when young. It is observed that people who are emotionally intelligent are wise to abstain from revealing about themselves at work.

A successful person knows the art of sharing the right aspect of oneself at the right time. They are careful in treading the path without crossing the fine line as they are aware that once the words are out, there is no going back.

Moreover, they also know that a professional network cannot be made without opening up without devastating their image. They start their work with proper planning and do not consider money as their terms for success. They bring perfection to their work and don’t perceive difficulties as problems. No failure will make them to deter from their path. In fact, they don’t complain or grudge about the problems but take it as a challenge for growth. Change is what they bring in.