There is nothing wrong with making mistakes, everyone does and even if you are doing the same, it is not a big hullabaloo. What matters are the things and beliefs you say to yourself? What we say to ourselves leave more impact than any other person saying the similar thing.

We are controlled by the beliefs that we perceive for ourselves, so it is good not to think of the believes that ruin your motivation and also the career. Some of the mental traps or psychological traps that one should not hold on are: 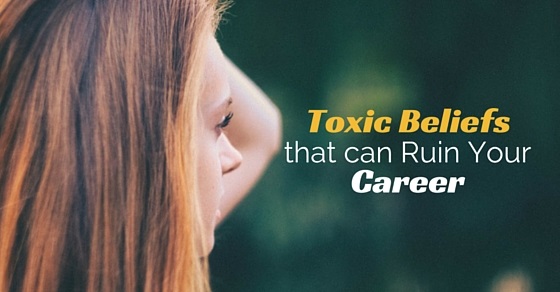 Mental Traps or Psychological Traps That Ruin Your Career:

Success is not becoming a boss of the company or earning name and fame globally. It can also be accomplishing some of the goals at the office, completing the deadline and submitting the work without any mistakes. Instead of crying for what you don’t get, relish the small pleasures of life and enjoy the life.

2. I leave everything on my destiny:

Do not blame the destiny; everything is in your hands. Life will give you both happiness and sadness. At one time you will be dealing in a difficult manner with your cards while on the other hand you might hold aces with the mental traps.

So, chill and instead of depending on the destiny, do something of your own. Unless you try, you do not get anything. You are greater than your destiny, you can beat destiny with loads of hard work and dedication towards the work.

Many of you have the habit of either saying I always do that or you say I never do that. It is just a self-pity that you do for yourself. Either a person does something a lot or does something little enough, but it is never always or never.

If you do that, then stop it then. You just are losing control over yourself and if you do not have self-control, you will never be able to change.

4. My self-worth depends on what others say:

Some people define themselves on the basis of what their boss, co-workers, and friends tell them. They silently believe in what they say, even if it is due to motivating. Such people lack the self-confidence to defend themselves and also fail to take action.

5. My future will be bad just like my past:

People denote and figure their future in terms of the past they had. When people fail to achieve their objectives, they tend to believe they will not be able to perform well ahead, which demotivates and deviate from them. This can happen often because of these psychological traps.

They think of their own that their goals are not achievable, they avoid the situations with risk, hence are unable to achieve the significant goals.

6. When emotions hinder the reality:

For such people, it is difficult to get out of their own false believes that cooks inside their head and also are unable to understand another person’s point of view from avoiding mind traps.

7. Every time I make a mistake and this time too same will repeat:

Some people have the pre-notion that they will make a mistake for sure. This means you do not have self-confidence and also you think if you made a mistake yesterday, today it will be repeated.

If such thinking rules you, then you are likely to make a mistake, even if you do not think the same way, ultimately the result will not be fruitful.

8. I cannot achieve perfection ever:

Thinking and doing the work will take you no far. For achieving perfection, you will have to work very hard even beyond your limit, only then perfection is attained. If you have made up your mind that perfection in your work is not your cup of tea, then even God can’t help you. So, take such negative thoughts out of the mind and only then you will be able to achieve success. Don’t get trapped into these psychological traps.

9. It is difficult for me, but not for others:

Many people think that their co-workers are more efficient than them. Perhaps it is true too much extent, but it does not mean what they can do being in good position, you cannot do is in a lower position than them. Nothing is difficult in life unless you try it.

Everything is difficult until you think and when the things come in hand and you start doing it, everything becomes easy and comfortable. So, nothing is difficult for you and easy for others. It is just equal for everyone from avoiding mind traps.

10. Depending on others for work:

If he will do, only then I will be able to move ahead. Dependency in careers does not have space. You are required to work on your own, right from the scratch. Depending on will make you handicap and you will not be able to move ahead in life which leads to mind traps.

Lagging behind will be your logo and with the passage of time, those will move ahead who were extending help to you. Asking for help is not bad, but fully depending on others will drown your career in the deep ocean.

The negative attitude can push you back even if you reach the top of success. Negativity in mind will never allow you to move ahead. It will only be your driving force for everything you do and presumably, it will not help you in doing anything productive.

When every sort of work starts with no, the work is likely to get fail, not because of the superstition, but because of your inherent nature of saying no. So, let positivity rule your life and mind and do not let negative attitude be the driving force.

12. Everyone is doing this, and I will also have to do the same:

So, instead of following what others are doing, just follow your instinct; good or bad, it will at least teach you the unexpected and will become an experience for life; at least the career will not be at stake.

There is nothing to do with what other’s think. Everyone will have a different perception regarding your work. If you will do the best, probably they will be jealous and if something wrong will happen, you will have to suffer the criticism’ although criticism will be there in both good and bad you do, just the magnitude of it will vary.

So, just do it without thinking much. Do it, make a mistake and learn from it, this will help you achieve success in your career.

When you do not wish even to try and drop the idea of giving a try thinking it to be very difficult, will do no good to you. For every risk, there is some gain and if you will not take any risk, there will be no gain. Try and try to know the inherent matter.

When you will give a try, you will learn something and when you don’t, you remain ignorant and obsolete in technology, ideas and also the beliefs. Try at least once what will be the consequences at large? Nothing more than a failure, right! So, it’s better to fail after trying rather than mere thinking, not doing and failing.

15. I do not have experience than he or she possesses:

They who you mention have to experience is only because they might have started from somewhere and to possess the experience not equal to them, but more than that, you need to experience the threats, opportunities, strengths, weaknesses to get the know how of the matter.

16. People will never allow me to move ahead:

Having a wrong belief that people will not allow you to move ahead, will certainly ruin your career. People are no one to stop you from doing what you wish to do and if you yourself lack of determination, you are likely to fail in reaching the last step of the success ladder.

People believe in planets that they guide us more than anything else. They have the ideologies of superstition that if they will follow such path they are likely to fall as per said by the priest, but this is not the case. You ought to do away with the superstitions as they only lead to darkness and are the clear way to ruin the bright career you may possess.

18. Laziness: Delaying the work for tomorrow:

When you think you have enough time tomorrow to complete the task, you are running away from the today’s opportunity to prove your worth. Laziness is the father of ruining careers.

Do not get lazy, what you ought to do today, do it now, without leaving it for tomorrow or you may have to suffer the burden of dilapidation of the professional career. You are lazy today, you will be lazy tomorrow as if you are not able to do today’s work now, you won’t be able to do the same tomorrow, thinking there will be another tomorrow for you, hence; losing the golden chances and calling the destruction monster over your own career.

When you think beforehand only that bad will be by your side and nothing good will follow you, this is nothing but the negativity that you are abiding inside the cerebellum. You think you will come under the eye and informal talks of people rather than getting appreciated, you do not move ahead for something fruitful and rest like a lazy, dumb person; despite being intellectual. For success, you will have to use your own intellect and not the mad brains of people. Your good thoughts will take you ahead and the evil thoughts of people will make you a lagger.

The worst toxic belief is that you need a high positioned job as you are highly qualified. You do not want to start from the small job and you sit free, killing the precious time. Shed this belief of small jobs and join from the small instead as the small steps make you learn to reach the larger ones.

Take inspiration from the great idols who started from the very beginning may be from zero in fact. Learn from what they did instead of learning from the wrong sayings of toxic people around you.

The beliefs are in your mind and if your mind is not free from the wrong sayings, you are nothing but a puppet in the hands of people who themselves are just good for nothing.

21. Thinking opportunity will run to your door on its own:

No opportunity comes to you on its own unless you try. Now try leads to no success. So, go out, give a try, ask help, make contacts and go for the best opportunity, but remember not to let the chance go freely from your hand like a sloping sand.

So above are some of the believes that assist a person in destroying the strong career base from mental traps. Do not let the negative thought, negative talks and also the negative beliefs, ideologies rule your bright career, or it will be the one responsible for what you could have achieved otherwise with due hard work by avoiding mind traps. Just be positive towards the life, accept the life with a flow.