Though no two women or men are alike, yet at the same time there are some work related traits that are gender specific. Both men and women have a different way in which they approach their work and deal with various hurdles that come their way. Given below is a comprehensive list of specific ways in which gender differences in the workplace have their particular good and negative traits! 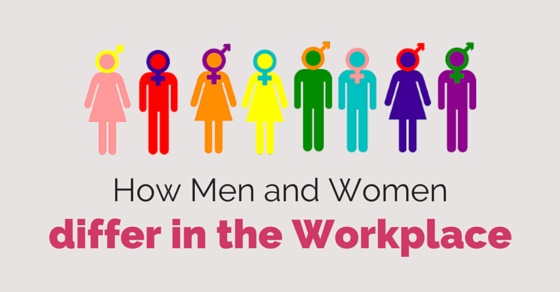 Gender Differences in the Workplace:

Both men and women have different ways of communicating in the work place. Women do tend to communicate in a much more professional manner where as men do not think it is as important to focus on outward show. Women make sure that they are being formal and particular even if they are replying to a simple text or an email. On the other end of the spectrum men have no inhibitions when it comes to sending one word replies.

2. Women tend to plan everything more meticulously than men:

It is in a women’s nature to try and control everything, it is rare that a women will be willing to just go with the flow and accept things as they come. Men on the other hand just prefer to think on their feet rather than spending hours on anticipating different problems that may or may not arise. Under different circumstances both these ways of getting things done prove to be effective. Sometimes, planning ahead helps a great deal where as otherwise, accepting things as they come is better.

If it might just happen that a man does not understand a particular instruction that a boss is giving, chances are he will not pluck up the courage to ask the boss to repeat it once again. Men assume that when they openly acknowledge such facts, they are displaying their weaknesses. However on the other hand women do not shy away from asking as many questions as they need to at the work place. They prefer asking questions at the onset rather than re-doing a project.

In case of a problem at the work place, chances are that women will consult others and seek council. Whereas men on the other hand, rather than asking for help or advice in such adverse situations often prefer to take matters into their own hands and come up with solutions on their own. Both these approaches to problem solving, are different and have their pros and cons. As long as problems are solved bosses do not mind which method employees opt for.

5. They differ in the way they take risks:

Taking risks is something that is very important in the business world. Sometimes such risks pay off and other times they don’t, it’s all part of the game. By nature men are more adventurous and love taking risks. When these risks do pay off, then there is nothing like it. On the other hand women are not known for taking big risks. Taking risks blindly is not something that women are comfortable with. They prefer opting for small calculated risks.

6. Differ in the ability to take orders and follow instructions:

By nature men are a lot more egoistic as opposed to women and they dislike the idea of taking instructions and orders from even their seniors at office. They prefer to do things in their own way. As opposed to this most women are very comfortable with taking orders as well as following instructions. Women make sure that they leave no stone unturned when it comes to executing the work that has been entrusted to them by the seniors or bosses.

7. Differ in their ability to handle stress:

Stress is something that has to be dealt with in any work place. Since women like to be in control of situations, when they notice that this might be going out of hand, then they get extremely stressed out and are unable to deal with it. As opposed to this, men on the other hand are better equipped at handling stress and managing adverse situations, they find it easier to think on their feet and come up with quick solutions to any problem that comes their way in office.

8. They have different ways of expressing emotions:

At the work place it is of paramount importance that people remain composed at all times as well as act in a professional manner however sometimes an individual might lose control of his or her equanimity in extreme situations. Both men and women react to same situations in various ways. For example if the boss pulls a women up for dissatisfactory work , chances are the women might be depressed or even shed a few tears, whereas on the other hand a man on being told the same thing might storm out of the bosses office in a fit of rage.

Though there are certainly exceptions to every rule, in most cases it is in the nature of a man to be more dominating and try and assert his authority over others. In group projects, a woman will more oftenly try to organize things in a particular way, delegating work equally and making sure everyone’s point of view is taken into consideration, whereas a man might try and force his or her ideas upon the other members of the group even if it’s against their will.

10. Men tend to be more competitive:

Being ambitious is certainly something that is not wrong; men have it in them to be excessively competitive. If he notices that his fellow colleague is equally or more capable that him then he tries his best to outshine him at any cost even if it comes to using unfair means. A woman on the other hand does not fret about competition to such an extent. She prefers to continue to put in hard work, to the best of her ability and the seniors take notice of the fact that she is an unobtrusive worker.

On a daily basis both women and men are entrusted with a number of projects to take care of at the work place. Both men and women have different work ethics, women prefer to begin working on the assignment as soon as it has been entrusted to her whereas on the other end of the spectrum men are known to procrastinate till the last minute and then burn the mid night oil. This does not mean than men submit substandard work. They believe that pressure brings out the best in them.

12. Men tend to think out of the box much more than women:

When a project has been allotted to a man, he tries to come up with a new and novel method by which this project can be dealt with. Going by the textbook is something you will hardly ever find a man doing. As opposed to this, women on the other hand, more often like to stick to the basics and trust in tried and tested methods of operating. They believe that simplicity is the key rather than over complicating things that can be simply dealt with.

13. They differ in the manner in which they deal with failure:

Though it does differ from person to person, women by nature tend to deal with failure much better than men. They try to take into consideration any advice that might have been given to them by seniors or bosses and try and improve in the quality of work which they deliver the next time. On the other hand men tend to take rejections personally and hardly ever like to accept criticism of any kind.

14. Different ways of forging friendships in the work place:

Though both men and women take their work very seriously, men know better how to separate their personal from their professional life as compared to women. As opposed to men who are never forge meaningful friendships at the work place because they view everyone as competition, women on the other hand are often able to find lifelong friends in office who they continue to keep in touch with even once they have left that office.

15. Different in their ways of dealing with success:

Lastly when it comes to dealing with success, women are much more humble, they consider success as a validation for all the hard work which they have done. Men on the other hand often end up becoming very smug and complacent once they have achieved success.

So these are some of the ways in which the attitude of a male and female differs in the work place. Though both have a different style of working as well as work ethics but at the end of the day they both end up achieving positive results. No matter what you do, at the end of the day if you deliver exceptional work under any circumstances, then you are bound to achieve success.