It may sound strange but there is a difference in the way both male and female communication styles in the workplace.

There are certain types of behavior patterns that both genders tend to show. However, this does not mean that all men and women possess these characteristics.

Psychologists who have studied the behavior of both men and women are careful enough not to generalize them based on stereotypes. Variations do tend to exist among both groups. 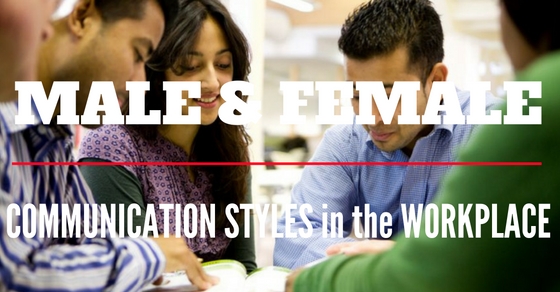 Here, we focus on the female and male communication styles that both groups tend to show within their workplace. Some of them are mentioned below:

Men and women have very different ways of managing their subordinates and giving them orders. Many studies have shown that women tend to be subtle in their speech, while men speak more directly.

Women, for instance, make use of tag lines such as “don’t you think’’ after making a conversation, “if you don’t mind’’ while making a demand or “this may be a bad idea, but’’ before a suggestion.

This is a good approach when you need to keep things subtle and do not wish to hurt others while presenting what is in mind.

The problem arises while such women order subordinate men who do not understand such subtle manners. They may not take the hint when their female boss gives an order or poses a suggestion.

Right from their childhood women are taught to maintain harmony in their relationships. This approach is visible in the form of softened demands, nitpicked statements and a cautious tone of communication.

One thing we have to keep in mind is that just because the speaker adopts a cautious tone of the content doesn’t necessarily mean that he lacks confidence.

In the same manner, direct communication which is often the communication style of many men and some women as well doesn’t mean that the person is arrogant, dominating or too proud. These are two different ways of communication. Each is effective in its manner.

Men seek some time alone to solve a problem while women look for companionship:

How men and women resolve issues is connected to major hormones, oxytocin, and testosterone. Normally, when men feel that they are stressed out and are faced with a problem, they tend to withdraw.

According to experts, it is a man’s reaction to the rising testosterone levels to meet up with the challenge.

In contrast, women looking for support to solve any issue. This approaches men and women quite distinct in the same situation.

Men prefer to arrange their thoughts properly and then speak up and clear the misunderstanding. Women, on the contrary, seek emotional support to speak their side of the story. They may use jargon and examples to explain things with clarity.

Another major area of difference in communication between men and women in the workplace is that women usually ask more questions than men. You might have heard the anecdote about the man who refuses to ask people directions when he loses his way. You may laugh at the story but it highlights a major aspect of male personality.

Asking questions signifies different things to men and women. Men normally ask questions for a single purpose: only to collect information. When it comes to women, there are two main reasons for asking a question.

First and foremost, they intend to gather information. Secondly, they ask questions simply to show interest in what the other person says and to strengthen the relationship.

Men find it OK to be more direct while women find it easier to communicate in a gentle, softer tone. An issue arises when these variations cause misunderstandings and misinterpretations among the staff.

It can have a negative impact on teamwork. It may ruin a professional’s chances of moving up the hierarchy of the organization. While most professions were predominantly male dominated, now the scenario is changing.

A person who clearly understands the difference between male and female personalities does better while working in an organization.

People communicate in the way they do, which they have been habituated to since childhood. But what is important is how co-workers react to it. They should give each other a chance and find what lies behind the style of communication of that person. This can help in improving understanding among different team members.

Men usually believe that there should be a clear purpose behind communication. So they speak with clarity and purpose regarding any subject. Women express their feelings through communication. For them, communication is an act of sharing.

Through communication, they try to strengthen their understanding with co-workers. Women are better at expressing their emotions through their words.

How much do they speak?

Men emphasize efficiency and productivity in their day to day life. The same applies to their conversation. A man speaks to clear all doubts. He shares only those points which he feels are of vital importance.

Therefore, men might wonder as to why women need to talk so much as they normally do. So, they might interrupt a female co-worker.

In contrast, women’s communication styles use to organize the different thoughts which come to their mind. This helps them to discover the major points which need to address.

A woman may not have a clear idea of whether what she is saying is necessary. Sometimes she speaks too much unknowingly.

However, women normally do not look for a solution when they start a conversation. Rather, they look towards a co-worker to listen and lend a patient ear to what she wants to say.

When it comes to sharing information, men tend to show their expertise over the matter which they are discussing. In contrast, women try to build relationships with others while sharing information. They, thus provide others with the opportunity to gain the same level of knowledge that they have.

It creates a level playing field and builds a good relationship with their co-workers. Men usually tend to interrupt others and compete with others to speak. Women wait for others present in the meetings to speak before they get themselves heard.

Therefore, they let their colleagues share the floor and speak on the issue which is being discussed. They can thus build greater goodwill among their co-workers as compared to men.

Both men and women have very different ways of listening to a conversation. Most trainers are of the view that men tend to listen to the speaker by slightly turning away and looking at the different parts of the room. Women, on the other hand, tend to look at the speaker in the eye and nod as a sign of approval.

So when a man turns away and starts looking at the different parts of the room, women tend to think that he is not interested in what is being discussed.

All people do not behave in the same manner and therefore there are different communication styles in the workplace.

However, just because someone seems detached does not necessarily mean that he is not mentally present in the conversation.

According to many eminent psychologists, women tend to be highly expressive. So, it is not uncommon to see them wave their hands, draw their bodies in by keeping their legs crossed and their arms and legs close to each other.

In contrast, men look calmer and do not show emotion. They stretch out and spread their ways. During a conversation, women try to acquire attention. Men, on the other hand, try their best to avoid emotional conflict.

How they build relationships:

Men usually prefer to work alone and gain leadership roles based on their abilities. This can often cause issues for men if they do not seek the required assistance when the need arises.

Therefore, they need to learn to collaborate to a greater extent by playing a more active part within their team. This will help them to get along with others.

The Seven Myths of Male Communication:

Myths are just wrong assumptions that people usually carry. They are not only false but can be considered as plain wrong. One should not only be careful but also should take precautionary steps to stop these myths spread.

It is a well-known truth that the communication styles of men and women differ in many ways. Miscommunication or wrong communicating things can create myths about anything in people’s minds. As per a study, men have weaker communication skills when compared to women, but this doesn’t stand true for all.

Men and women are varied in many ways, for instance, the way they behave, think and even communicate. The way their attitude is built depends upon how they take and share things.

Saying this clearly means that communication holds great importance in everyone’s life. Here are a few types of how males and females behave in particular situations.

Communication cuts Down When :

When He Is Feeling Down:

When She Is Feeling Down:

What Does It Mean To Listen?

How Much Should You Say?