The contemporary world is such that as soon as we leave the personal interview round our social media accounts are thoroughly checked and interpreted by the recruiters.

Each social networking site has its own ethics and trends which are supposed to be followed.

Similarly, when it comes to LinkedIn it is also called as the “professional facebook” because some of the features of LinkedIn are identical to facebook.

However, since it is “professional” LinkedIn too comes with its own set of norms which you should ideally follow if you want to portray a good image.

On the similar note, here is the guidance on the LinkedIn Profile Pictures that you must avoid putting on LinkedIn. 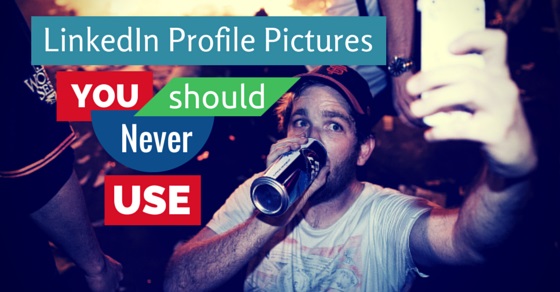 It’s okay if you pout for selfies and post it on other social media networks however, please refrain yourself from posting a pouting picture as LinkedIn profile pictures.

It is a serious networking site where people are looking one other for professional purposes and here the pout is just ruining your image.

No wonder what drastic chance an editing in the photograph can do and this is the exact reason why you must avoid posting heavily edited images on LinkedIn.

It creates a wrong notion about you and who knows the recruiter might just fail to recognize you in personal, thanks to your photo editing skills.

You might be adventurous, quirky and unique but you got to understand how ethical the platform is.

Avoid putting quirky photos of yours like weird things in the background or you making up weird poses and faces because all this somehow shows that you are least interested in the job or you are not taking LinkedIn as seriously as it is supposed to be taken by you.

Being casual is good but then again there is an acceptable degree of casualness. Do not put a casual picture of you sleeping in bed or lying on sofa and watching TV.

These images are simply enough to prevent people from sending you invitations to connect.

Remember, picture speaks a thousand words and your casual picture can reveal a lot unfavorable things about your personality.

Make sure where are you clicking the picture and what is appearing in the background.

Avoid yourself from putting the pictures that have weird background like, the ones clicked in bathroom or some public places like railway station. These pictures do not put forth a nice impression of yours.

6. You in weird clothes:

You might love dressing up unusually and that is absolutely fine however, do not even try to put these pictures on your LinkedIn profile pictures.

Your uniqueness might fail to impress your recruiters since they might not like it. Thus, try dressing up formal or at least casual in an acceptable sense or level.

It is a good idea to put group photos on facebook because there most of the people in your friend list know you personally and hence they can easily figure out who you are in the group but, on LinkedIn people are not really known to each other.

If in such scenario you put up a group photo, it won’t be possible for the recruiter to under who you are actually.

Chances of mistaken identity are more therefore, keep in mind that this is your account and hence you must put an individual image of yours.

Okay so you might be a partying animal who madly love to party however, LinkedIn is not a good place to put an image where you are partying with friends in a club with all sorts of lights destroying the visual.

Post a party picture only and only if it looks decent and elegant enough to recognize you.

People has come up with a trend where only a part of face will be clicked, probably just an ear or lips and neck.

However on one hand it seems creative but on the other hand it is a bad idea to put the same thing on LinkedIn.

People on LinkedIn are recruiters who need to see you not your creative photographs so avoid doing that.

Putting a photograph that not only belongs to you but also a vast landscape right in the background is not a good idea either.

Your photograph should be identical and evident that it belongs to you. After all who has got time to zoom in just to see how do you look?

11. Picture with too much makeup:

Your skills and work experience should do the talking for you and not the makeup unless and until you are looking for a job in glamorous industry in similar fields like make up.

Otherwise, you should avoid the photograph that has too much of makeup. Instead choose the one that is simple and natural regarding your looks.

12. A picture that is looking away:

You are supposed to show your face instead of either left or right side. If you wish you appear confident and decent then the very first advice is you got to look directly into the camera and click.

Looking away poses are good on creative fronts like photo shoots but they are not at all suitable when it comes to putting up on the LinkedIn profile.

13. Smaller size than the profile frame:

Many individuals put up a picture that is smaller than the given size in the frame. This makes the picture pretty unclear and less appealing.

This also sets an impression of carelessness on the part of the employee and hence either resize the photo if at all it is possible for you or simply switch to another good snap but do not put a photo that is smaller than the given frame.

Having a picture with your spouse might seem to be cute on other social networking platforms but however, it is not advisable to put such pictures on your LinkedIn profile pictures.

The account is yours and belongs to only you and hence it is going to be a wise decision if you put up a photo in which you are individually present.

It strikes that either you are careless or you have no sense of proportion.

Some also try to put paintings, caricature, sketch or drawing of their face. This could be a creative idea for those who have seen you but on the platform like LinkedIn where people hardly know you, you should avoid caricatures, sketches and drawing instead use your actual photograph.

17. Putting up symbols or emblems:

There are few candidates who put up a symbol or emblem instead of their own photographs.

This is instead a very bad idea since it crashes down attempts to reveal your identity just like that.

18. Putting a logo of company:

Some employees are way too loyal but mind you, this loyalty can turn out to a hurdle as well.

There are LinkedIn pages which are especially made to promote the company, product or services and hence there are no need of people who put logo instead of their own photo.

We agree that you are working in a brand but aren’t you as an individual a brand too?

LinkedIn is one of the best opportunities lurking around us. Photographs speak a thousand words and that is why you must be careful while choosing the picture that you wish to put on the profile.

Your first impression lies in the hand of your profile picture, it has to be attractive, appealing and yet sober, professional and decent.

If you get the right blend, chances of making profile picture blunder are really less.