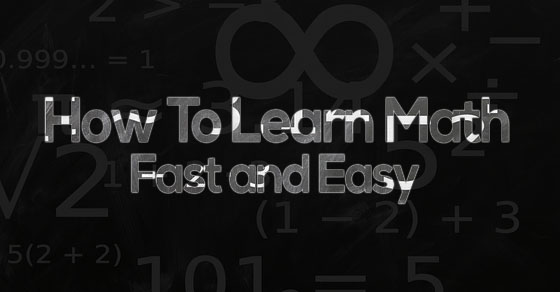 Whenever a person asks a student or anyone about their favorite and toughest subject in school and college, then most of the time you might receive only one answer, toughest would be maths. But, there will be some people who believe that to learn math fast is not a difficult thing and in fact it is easier than it seems.

If students or anyone who believes that studying is difficult than anything in this world, then it’s all in their mind.

If a person start practicing and learning maths then it will definitely change your opinion.

There are people who think that if someone find maths as easiest subject than anything, then those people definitely will be declared as the most intelligent people.

To overcome that thinking, a person needs to understand their capability of handling maths and then maths is going to be the easiest subject.

Here is a easy way to learn mathematics

Maths is the only subject which can be solved by continuous practice.

It is not that easy to understand maths but if a person is determined about solving the sums then maths is a subject which can be solved within a fraction of seconds.

There is a famous saying that practice makes a man perfect. And if a person keeps practicing something in his / her life there is nothing which can stop them from achieving their dream.

Similarly, when it comes to maths it is simple, you need to keep practicing the solution for the problems.

Sometimes while working out a math problem, there will be a possibility that a person may not get the answer for the question. That is may be because of their small mistakes.

If a person wants to get rid of the feeling that maths is a tough subject, then he / she needs to keep an eye on their own mistakes.

At some point of time while working out a math problem, a person may fall on bad at some of the methods and to overcome that bad fall, he / she need to rectify their errors and mistakes so that there won’t be any kind of repeating such mistakes.

3. Understand the concept of problems:

Most of the time a student or any person fail at working out such a math problem because they don’t understand the concept of the question.

If a person understood the question wrong then obviously they are going to receive the answer wrong as well.

Therefore, to solve a math problem a person needs to understand its question first.

Most of the people make these kind of simple mistake and find maths tough to understand.

4. Refer from other to clear doubts:

It is explained earlier, that maths is a problem which can be solved by practicing it regularly.

Similarly, while practicing such problem if a person receives doubts about the solution, then it would be better if that person refers from other to clear their doubts.

Referring the worked out solution with a teacher or someone who understand the question better, will clear all doubts and makes working out a math problem easy.

Concentration is something which is necessarily important while studying any subject and especially when it is a tricky math problem.

Concentration is required while understanding the mathematical problem, it helps to identify the actual problem hidden inside the problem.

Therefore, it is advisable that the person solving the problem needs to be attentive while understanding problem to solve the problem as soon as possible.

In schools the kids are advised to create a chart of all the mathematical methods and formulas and place it in their room where it can be visible.

So that they keep looking at the chart and understand how to actually solve the problem.

Because when it comes to the mathematical problem, it is better if a person identifies the root of the problem unless just the solution.

Therefore, making creative activities will be helpful for all those people who thinks that maths is a difficult subject.

When it comes to mathematical issues, a person needs to maintain a calm approach while solving some mathematical questions.

To make that happen a person should start involving some creative ideas to make mathematics fun.

Therefore, indulging some creative ideas will help one solve mathematical problems in a better manner.

For example, if a person finds difficulty in solving mathematical problems, then they can make use of practical elements to understand the problem better so that they can get the answer.

How to Study Maths: Tips for Solving Maths Problems

The relationship between maths subjects and students is a kind of love-hate relationship. While there are students who love this subject, on the other side there are few who hate it. There are also instances where students’ hate towards maths has changed to love as and when they try and learn it.

Maths undoubtedly is the base of several developing technologies that are being evolved. And will be used in almost every sector. Follow the tips mentioned below which will definitely help you to learn math fast and score good in mathematics. Remember one needs to have time and patience to fall in love with mathematics and master this maths subject.

How to Become Brilliant in Maths:

Number Tricks for Doing Maths in Your Head :

It is not tough to understand maths but it is tough solving the problem without knowing the actual maths trick that can be helpful to solve the math problem.

There are some simple math tricks that help a person solve a mathematical problem without wasting much time.

1. Round off numbers while adding:

Most of the time adding two or more than two numbers seems difficult and to make addition simple a person can consider rounding off those two numbers and try to get the answer.

For example, if there are numbers which is 535 and 346. While looking at the number it is not that hard to solve, but there is a simple way to solve the problem and that is first, round off both the numbers like this

Its not just addition, when it comes to maths, its like everything that is related to mathematical is troubling.

For example, while subtracting a large number from a thousand, keep note that a person need to subtract the first number from nine and second numbers from nine but except last number.

Instead of subtracting the last number from nine, make use of ten while subtracting.

3. Multiplying even and odd numbers by five:

Whenever there is a multiplication problem by five, there is one simple rule or trick that can get one the answer without wasting much time.

And that would be while multiplying any number from five, remember to follow the trick.

For example, while multiplying five with an even number, take the even number and make half of it and add zero at the end of the number to get the answer.

And on other hand, with an odd number, deduct one from the odd number and make half of it, then just add five at the side of the number to get the answer

When it comes to dividing the number of the different set of number, then the person needs to keep in mind these tricks and that is

If there are set of number lets say 2 to 9
Then keep in mind that the division can be easy by dividing it by the same number.
If the number ends with 2, 4,6 or 8 then it is going to be divisible by 2 itself.

5. Easy multiplication of the number ending with a zero:

Multiplying large numbers can be a bit tough not only for kids, but it is impossible for adults as well.

Therefore, to make that simple a person can make use of this trick while multiplying large number which is ending with zero.

For example, take a large number ending with zeroes. Keep the zeroes aside and try to multiply only the numbers and get the answer in minutes.

But there is another way to multiply large numbers in a simple way and that is by dividing the first number by two and double the second number, then multiply both the numbers to get the answer.

Learning maths can be easy if the person or a student studying maths gets their mind straight to the subject other than anything else.

There are some things which can make maths learning easy and fun for everybody. The following mentioned are few tips for learning  math.

Because missing a single class can cause problems while catching up the mathematical problem without any confusion.

Maths is a subject where there is a possibility that a student or a person end up being confused about the mathematical problem.

And to overcome that situation a person shouldn’t skip their maths class.

Being attentive in maths class can let one understand maths better without any doubts.

2. Don’t fall back while solving the problem in the class:

It is better if the student keeps working the problem similar to their teacher’s methods. And sometime a student may get stuck in one place of the problem.

Instead of being stuck in writing down the problem, try to go along with a teacher with solving the problem.

And at the end if a student is having any doubt then they can ask their teacher without skipping any single methods or steps of the problem.

3. Repeat the class work at home:

When it comes to the mathematical issues, a student need to make sure that he / she does repeat their class work at home to understand the maths in a better manner.

Instead of wasting time, a student should repeat all the sums and problems that the teacher has completed in the class and try to solve it by your own.

This kind of practice can help a student learn math quickly and in a better way.

4. Seek help from outside the class:

Most of the students and people, makes an effort by joining extra coaching classes for the sake of understanding maths better.

It is better to join extra coaching classes for maths, because sometimes at home a student may not be able to work out the math problems, but in an environment like a classroom, he / she may definitely work out such problems.

Therefore, it is advisable to seek help from outside the class to be better at solving the mathematical problems.

5. Start dividing the parts of a subject:

In mathematics, there are three parts of the subject and that is simple arithmetic, algorithms and geometry.

If a student finds each of the subject tough to understand, then it is better he / she start partitioning them so that he / she can divide equal parts of working time for the each different segment of the subject.

However, the bottom line is that all these methods of solving the mathematical problem, can help all the students and others to start taking interest in maths.

Therefore, if anyone feels that maths is a killer subject, then they should follow all the tips and tricks mentioned above to understand and learn math fast and better.