Being lazy is considered as a state of mind in which a human mind and body experiences uninteresting natural waves. These uninteresting natural waves create an environment of laziness. A lazy person seems to obtain a very low level of energy and interest to perform any kind of activity. There are people in the world who have set certain standards in being a lazy person. And today we will discuss about those who have been laziest employees in the world. 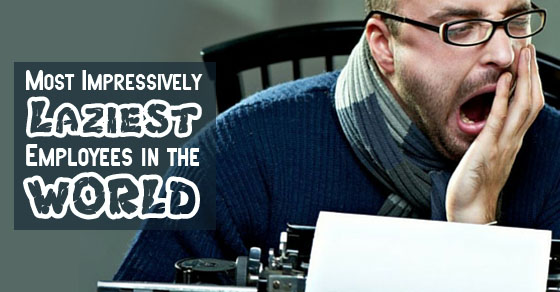 Lazy Employees in the World:

In this category, there is such a level of laziness that when a person tries to understand their level of laziness will definitely go crazy after seeing or hearing the reason behind such level of laziness. Here listed below are those people who have been worlds laziest employees and they are as follows,

1. Employee of the state have been skipping every Friday almost over 20 years:

A State employee used to skip his Friday not just for a week, but it went on till he delivered his service for 17 years. A person named Howard Dean have kept skipping his Friday every week for 17 years. He used to work as a food services director at the department of correctional services in New York. It may seem really amazing to know that to make good use of tax money of people he used to take a day off from work every Friday for 17 years.

He even kept receiving $240,000 in the name of gas money claiming some nonexistence official trips. And after travelling for such long time, he used to take a good rest in a luxurious hotel claiming $75 for his stay in that hotel.

And finally it caught the government eyes after retirement of Mr. Howard Dean. The government came to know about the fraudulent acts he have rendered during his service time and also tricked the government $57381 in the name of his pension. He is now in prison and the court has charged some case complaints against him.

2. A lazy secretary tried to use her boredom in the form of art:

A sales coordinator of Sheraton hotels in Elkhart, lowa, a woman named Emmalee Bauer, who was 25 years old, used to work as a sales coordinator providing secretarial administrative support. Emmalee used to work on her typing machine to provide certain administrative support, but eventually it turned as she was not exactly providing services to the company, instead she used to type any random letter on the A4 size paper.

As days passed people started noticing her typing skills as a form of her hard work. Every single typing effort of work she delivered has considered her as a very hardworking woman. But the truth was that she used to write nothing but simply random letters.

Eventually her boredom of typing entitled herself to write a book about laziness and she completed her book of 300 pages while working nothing in an office without any loss of payments. As a result of that, later on the administrative department came to know about her fraud and they fired her from the work and now she has claimed a complaint against the company to provide her employment facility fund (which is bizarre).

3. The Japanese ministry of procrastination (and robots):

4. Mailman enjoyed his jury duty as a paid vacation:

Joseph Winstead used to work as a mailman and never delivered not even a single letter assigned to him. He also have been chosen for the jury meeting in October 2003 and was receiving paid leave for such jury meetings. Eventually, it came to his thinking that his superiors are not interested in the days of his jury meeting or mailman duties or holidays. Therefore, he planned to scam them by receiving paid holidays in the name of jury duty and has been successful in continuing it for one year.

Later on when he decided to continue this for his second year of service, the new panel of supervisors came to realize that there is something weird happening and caught up his fraud to the department over for 2 years.

Mariem Megella was a 24 year old woman working as forensic scientist veteran in the NYPD forensics lab. She used to deliver reports of forensic elements which was helpful while investigating a criminal case and to find out the guilty one. But it was not as she used to deliver perfection in her work. As far as her mood, concerned she used to work on the cases as per wish. She even switched some of sample of drugs while the investigation was going on.

Because of constant complaints on the forensic department of the NYPD, it came to know that Megealla used to work according to her mood. She worked on those days when she would feel good to go. And because of her, a number of cases have been suffered tremendous loss.

Currently, she is in prison for the negligence shown in her part of government work. And also charged some case against her for misleading evidences during an investigation.

Ray Brent Marshal worked as a Crematory in Tristate from 1996-2001. His work was to cremate the dead bodies and provide the family their beloved one’s burnt ashes. But it came to know that the ashes, he used to deliver the families which came for the cremation was just a concrete dust. He claimed that the machine which is used to cremate those bodies was broken and he was using fire to cremate those bodies.

Later on, one day a complaint came against him that there are 339 corpses lying in his backyard without any kind of cremation done. But those families have received the ashes of those cremated bodies. And when he was produced to the court for his sin, he again claimed that his crematory machine was broken, but when the investigation started it came to know that the machine was working well and because of his laziness, number of families lost their beloved one’s all over again.

He is in prison and the court has charged him a grand total of 787 counts, including all other burial charges, theft and for misleading the innocent families.

To conclude , we would suggest that being lazy or feeling lazy is a state of mind which instructs the human body to respond accordingly. There is nothing wrong with being lazy, but never let anyone else get hurt or avoid damaging any stuff because of your laziness. Therefore, in this content there are several types of laziest employees in the world and their stories of laziness.