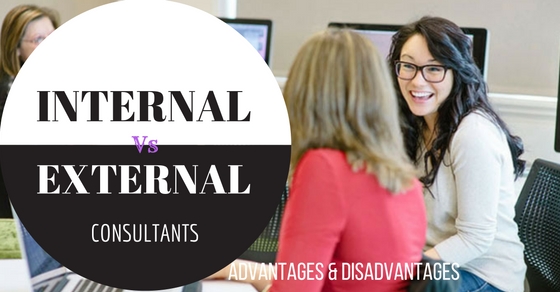 With the rise of industry, commodity, and production, it is hard for companies to keep up with the demand of the common public.

So for better results, companies either employ their workers or external consultants to give them advice on how to meet growing demands.

As a business minded people, we often confuse the choice between internal and external consultants.

There are mainly two types of Consultants

There are some basic differences between certain advantages and disadvantages between internal and external consultants. This article covers almost all areas of concern while opting for either of the two. An Internal Consultant earns an average salary of $79,336 per year

An External Consultant earns an average salary of $85,750 per year

An employer’s decision making always focuses on organization goals. There come instances when the slightest mistake can lead to huge losses. But leaving the situation unsolved can become even more critical.

Choosing between internal consultants or an external advisor is one such vital decision that the organization as a whole needs to make. The basic way to pick one will be based upon the requirement of the organization and the features it provides.

External consultants mainly deal with large scale operations and when deep insights regarding the situation are to need. It can consider as a neutral and independent solution for the problem.

The main reason for choosing an external advisor is due to the lack of internal details (work culture) and specializing to tackle risks of the people working in the organization. Though comparatively, external advisor service is expensive the service it provides will be exceptional.

The more that idea seems to run with the needs of the common people, the more likely it is to succeed.

But before you jump the gun on an idea, you need to be sure that it does not backfire.

Internal consultants are used to handling things as they normally do. They may find it too hard to walk the extra mile and come up with new and creative ideas since they are already putting a lot of effort into employees.

But external consultants have to specially call to look into a problem to keep the company from sinking.

There is much more scope for external consultants to find more creative as well as cost-efficient ways for solving crises.

2. A detailed survey of problems:

For internal consultants, it is like taking care of their family.

They will be more familiar with the problems of the company than the externals can ever hope to know.

On the contrary, external consonants run a big risk of pissing the workers off. Since they cannot possibly hope to learn about each other personally, they would most likely fail to co-operate properly.

The external consultants can never get to the root of the problem as successfully as the internals would.

It is hard for workers of a company to find flaws in how they deal with business easily.

This is primarily because working too many years for a company keeps you from seeing the whole picture.

The reason can be either sentimental or the wearing off of a hard professional attitude.

However external consultants are free from any bias. They can see directly through the causes and problems that are keeping the organization from advancing.

Sometimes an outsider’s perspective is much needed to get a stark image of what is going on.

External consultants are likely to take their job more seriously since that is what they do for a living.

They can put in a lot more time into digging up information on various matters that will help them get the job done.

Internal consultants would have a lesser chance of getting their hands on information that is not so easy to get.

In addition to that, external consultants keep an eye on all rival companies so that the coast is clear for their company to make its call.

The roles external and internal consultants play are different from one another by nature.

External consultants will present an honest view of the picture but they fail to come to grips with the minute details.

The internal consultants, on the other hand, can take advantage of the already existing relationship with the parent organization.

They perform an outsider-insider role that requires to assess the true extent of damage, the company has to bear.

The workers of a company would naturally be more trusting around their people. Internal consultants are appointed separately for each department and sector.

However when the situation arises departments can send for consultants from another department.

On the other hand, external consultants have an all-encompassing team with suitable skills to handle all kinds of situations.

Winning the trust of others by rule is an extremely hard nut to crack. And from the beginning, there is an unresolved and unexplained difference of opening between external and internal consultants.

So, as a result, there is a kind of misunderstanding between the two parties.

The internal consultants, on the other hand, are highly unlikely to face any shadow of doubt from the workers since they know each other well.

External consultants have easy access to information that is not comfortably given away.

Internal consultants are not able to do as much in getting their hands on outside information.

Moreover, their domestic nature of work is inadequate when the problem has grown much beyond their control. External consultants are the last possible option for recovering the lost name and status of a company.

8. The question of expertise:

Both internal and external consultants are experts in their respective places. The question of one option being better than the other does not arise.

But in honest opinion, both have a specific set of skills that are effective in different kinds of situations.

As a result, we might sometimes see one successfully pulling something off while the other barely scratched the surface.

External consultants indeed ought to be more focused on their work because their only job is to squeeze companies out of sticky situations. Nonetheless underestimating the potential of internal consultants will be a big mistake.

Let us not forget that internal consultants are not only able to come up with quick and easy answers to serious problems but also know the nooks and crannies of the company.

Winning the trust of the people around you is what helps you overcome troubles. This holds for almost everyone and company consultants are not an exception.

Taking time out to know the people working at a company increases one’s chances of pinpointing the problems better. So in a way, internal consultants here have an edge.

However, if company workers can get past their petty ego battles then it is not so hard for anybody to make friends anywhere as long as what they think is correct.

No one would want to disappoint their people as long as the responsibilities are in safe hands. It is only when the complications go well beyond the control of the company itself that external consultants are called for damage control.

Not being able to get things done in a given time is a big problem. Internal consultants are workers at a company who perform as consultants when necessary.

This does not mean that they are inept for handling problems such as a lack of creative ideas for start-up businesses.

Internal consultants have to work extra hours consulting and discussing problems the company is facing on top of their usual work.

On the other hand, external consultants are meant for this type of works only. And by keeping it separate from any other line of work they can think more clearly and are more likely to come up with all-round solutions.

Their way of working is more effective because they can channel all of their energy and effort into working on one single project at a time.

11. A new field of entrepreneurs:

The concept of external consultancy is relatively new. But that does not keep them from thinking of brilliant ways to control loss of funds or new ways to improve sales.

External consultants work in a group of a few adept people having well-rounded knowledge in all aspects that concern their work. This can sometimes be considered more effective than internal consultants in a lot of ways.

Firstly, they take everything on a very professional level so there is no ounce of sympathy involved in what they do.

This is good because often internal consultants fail in projects not because they lack the skill but because they are too afraid to run the risk of making errors.

But it is quite the contrary with external consultants since they can look at problems without letting their judgment be clouded by their feelings for the company.

12. Taking things on a personal level:

Other factors that come into play are a general rivalry between colleagues and favoritism. This does not generally happen since all employees are treated equally.

But in case there is a sort of rivalry among colleagues that has led to groups then it poses a big threat to the well-being of the company itself.

Nothing is as bad for the company to crumble from within. When there is a general rivalry among workers then consultants of the company can do very little to help recover or innovate in any way.

In the worst case scenario, the company would keep losing more money on a lack of cooperation from its employees.

This, however, does not concern the external consultants at all because working as a team is the only thing that will get their job done. This is hard for internal consultants to understand because of the greater number of workers involved.

The best option is to let the internal and external consultants work together. Though this is rarely seen, it would do much more to create a hospitable environment for the workers.

Most of the time they are seen to be at opposite poles but if they can be made to work together then the chances of your company succeeding in its venture grow by leaps and bounds.

Every so often the parties turn each other down or they are never expected to work with each other because of the basic difference in the way they see and define problems.

As a result, their solutions are also different. But this does not mean that they will never be able to diminish their differences if the prospect of teaming up shows more promise.

Take a moment to think about how you would feel if you are not paid for offering your services. It is pretty much the same as the internal consultants.

They are continually denied a good payroll for offering help that is not included in their job purview. And it would virtually break them inside to see the external consultants reaping rich dividends when their work is done regardless of whether the problem is solved or not.

This kind of treatment will tick their employees off. And they would think twice before volunteering to do something that was not in their job description or without money.

Hiring internal or external consultants has both good and bad sides. However, despite the shortcomings, there are ways to reap good results. Simply speaking, the number of advantages are more than the disadvantages if one knows when and how to make use of them.