There was a time when people used to hold a reputed job in the company even without a college major, but nowadays because of growing competition, it is necessary to have a college major. Most of the educated people recommend others to continue their education. And completing a college major can provide social and financial security to the pursuing person. Therefore, it is important to have a college major if the person really wants to achieve greatness in his / her personal and professional life. 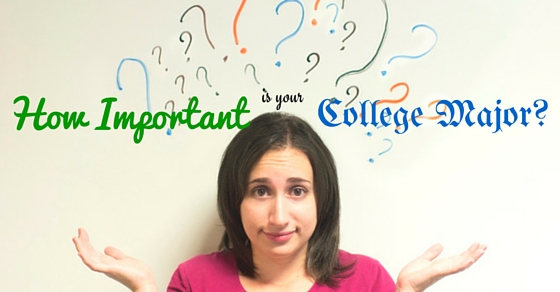 Does the college major really matter?

There are people who are confused between a discussion whether the college major really matters or not?

1. People can land on the job in which they have a college major:

Most of the time finding a job can be frustrating for people. But if a person completed his / her major in some of the streams of study, then the possibility that person might land on a job in which he / she holds a major in is high. One of the major impact that a college major can provide is that the person can handle his / her work better than anyone. Completing a college major benefits a person in terms of their bright future and career.

4. A college major can pursue his / her interests / hobbies:

Whenever it comes to a college major, most of people have a narrow minded thinking that if the person holds a college major then he / she should pursue something related to his / her field of study. But it is not necessary that the person needs to follow the same and old thinking about doing something related to each other. If a person really is passionate about his / her interests, then they should complete their dream and go for it.

It is common to think that as most of the people believe in their talent than their education and qualification, it is also proven that more than talent and skill, a person achieves safety and security fulfillment while completing a college major. Most probably there are people who like change in their life, but to follow the change a person can hold on a strong ground of a college major, so that he / she can stand still even if the ground is too shaky.

Why your College Major Doesn’t Matter:

It is not necessary that a person who holds a college major can achieve better in their life. Actually, there are several examples of people who have achieved greatness in their life even after not owning any college major.

1. It has nothing to do with competition:

Most of the people continue some kind of thinking that if a person holds a college major then that person survive in this competitive world. But it is not true, if a person has talent and skill, then he / she can work wonders with their ability and sense of skills. Therefore, competition has nothing to do with a college major. And even a person without a college degree can survive better than a college major.

2. There is work field with higher income, not for a college major:

3. Experience matters the most:

4. People consider the skills over the major:

Most of the people with a college major, continued their life related to their college major. But from inside, they are absolutely unhappy with the way that they are living their life. The possibility that the person might live a luxurious life without a college major is very minimal, but possibility that he / she will live a happy life is not rare either. It depends on those people what they really want to do with their life. It takes immense courage to follow their dream and it is difficult to hold on to that dream, but eventually it gives a sense of satisfaction to that particular person.

6. Skills works better with a purpose:

Every single human being holds a purpose for their life. Having a purpose and meaning in one’s life is something that provides immense happiness to a person’s life. Whether it is personal or a professional life, one need to understand that if he / she want to be successful in their life, then they need to work on their skills with purpose of accomplishment. This kind of perception changes everything. A skill with a purpose value works more than a college major without a purpose.

According to all of these changes. It is not difficult for a person to understand that holding a college major doesn’t matter, if a person holds the trust of his / her skill. And finally people consider that the value of building network weighs more than a college degree. If a person with a college major doesn’t have any network, then the value of his major is nothing. But in another way, if a person holds a major and network also, then he / she can accomplish success in this world.

Majors that make a difference in the world:

There are several types of major that a person can choose to make his / her personal and professional life better. These college major subjects made its mark on this global world in a unique way that there are several people who want to follow its uniqueness for their better future.

In simple words, finance is a type of study which involves all the money related matters. One of the obvious choices that people make while pursuing major is that they choose finance as their college major. It is one of the promising career option that never goes wrong for anyone. In this economic world, a person with a finance major survives better than any. It provides all the study relating to the financial up and downs. Studying finance major briefs all the elements about the economic changes and benefits as well.

There are people who choose finance and engineering as their majoring subject, but being a popular majoring subject, it comes with a disadvantage and that is it have limited scope of success. Therefore, a person can choose to pursue their major in environmental studies. As it matters to the environment and the elements which harms the environment, then it’s obvious that it is one of the source full thing to major in.

Global studies emphases more on the climatic factors. And it focuses on the elements which is affecting the globe. Most of geographic matters are covered in the global studies. It is one of the interesting study material that anyone should major in. As people are going more for finance and engineering then, the possibility of increase of scope is in the global studies. Therefore, it is better to choose global studies as a subject that need to be measured.

In this field of a college major, all the society related matters are explored. It is one of the non profitable matter of subject where all the materials studied goes without any profits. It emphases more on social and security issues in the world. There are several non government organization that provides information about these social service studies. It is one of the part of community leadership and civil engagement.

One of the interesting and entertaining part of majoring a college degree. Most of the subjects covered in this culture and media are from cultural oriented. Most important part of majoring in the culture and media subjects so that it provides an overall description about the media dynamics, gender division and popular media persons. Therefore, it is one of the popular majoring subjects that almost made their difference in this world.

The bottom line is that, at the end of the discussion one will definitely understand one thing that it doesn’t matter if a person hold a college major or not. But the only thing that matters is that a person need to believe in their skills and abilities. Therefore, if a person is confused about career and future availability then one can follow all the information given above about the importance of a college major.