Top companies can well afford to be very selective when it comes to recruiting new employees to their firm. In today’s challenging as well as competitive world having credentials and qualifications isn’t enough to help you get the job, you have to be able to think on your feet and multitask without getting flustered or stressed out in any way. To test whether you are someone who can handle a stressful situation, companies have devised a system, where they ask tough and hard interview questions, just to see how you react and whether you are able to come out with flying colors or not. Here are some of the hardest interview questions ever asked. 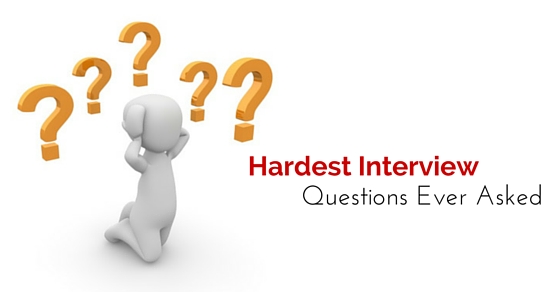 Hardest Interview Questions – How to Answer Them?

Though this is a question which is asked at almost every interview, yet at the same time it continues to be one of the hardest interview questions ever asked, where people just get confused about what they ought to say. In the event of being asked such a question during your interview, all that you need to say is that you think that you should be hired to the company as you believe that you are exactly the kind of person who they are on the lookout for. State categorically, that in the time to come, you will let your actions and good quality of work speak for itself and you will give your best at all times.

When you are asked a question at your interview, more important than what you say, is the manner in which you deliver your answer. Companies are not on the look out for people who take a great deal of time to answer even the simplest of questions, yet this being stated they also do not want employees who act impulsively. So if you are asked this question at your interview, then rather than mentioning some petty reason like the pay was not good enough or the boss was authoritative, state that the job no longer excited you anymore and you are someone who always looks for adventure no matter what.

3. ‘When it comes to your style of work what is your biggest flaw?’

In addition to being extremely hard, this question is also very tricky. If and when you are asked this question, one of the worst things which you can do, is beat around the bush and not get to the point at all. Rather than trying to avoid addressing the issue at hand, what you should do is state a flaw, which will not show you in poor light. For example you can say that you are someone who is so in love with what you do, that often you lose track of how many hours you are spending at the work place and this causes you to lose out on precious time with your family. Saying something like this will silently communicate that you are a dedicated worker.

4. ‘Would you call yourself a team player or a person who works individually?’

Not many individuals are able to work successfully alone as well as in a team. So if the interviewer asks you whether you see yourself as a team player more or as a person who works individually more, then in such a case, it is advisable that you say that you are someone who works much better individually. If you say that you prefer to work individually, it means that you are someone who isn’t dependent on anyone else rather you can take decisions on your own and stand by them. However having mentioned this, state that you also have no qualms about working in a team, it’s just that you have an unconventional approach to doing things.

5. ‘Tell us how you would sell an Eskimo a fridge?’

This is a question which is really tough indeed, it is most often asked to people who are seeking jobs in marketing and sales, yet it can be asked to anyone at an interview, simply because the interviewer wants to see whether you have any powers of convincing others and also whether or not you have good communication skills. If you need to, take a moment or two to think about how you would like to go about answering the question. Just remember that the more unconventional your answer is, the better it will be for you, but in the event of trying to sound smart and witty ensure that you do not come across looking foolish.

6. ‘If you were to write an autobiography what would it be titled?’

If recruiters want to know about your credentials as well as qualifications, then all that they need to do is go through your resume. Yet if they want to know what kind of individual you are, then they have to ask you question which are slightly ingenious to gauge how quick you really are. Being boom smart, with mugged up knowledge isn’t going to take anyone very far. To know whether you are of a creative bend of mind, chances are that your recruiter is going to ask you a hard question like this one, to see what you are able to come up with on the spot

7. ‘What are your three biggest strengths?’

By the sound of it, this seems to be one of the simplest questions , but if you actually sit down to think about it, when asked at an interview, what three strengths could you mention off the top of your head to prove that you are someone who will prove to be an asset to the company in the event of being employed? If you are asked this question, rather than mentioning the common, run of the mill qualities, you should try your best to think of some strength which will really set you apart from everyone else.

8. ‘Who is your biggest inspiration in life?’

This is a hard question indeed, asked at almost all interviews. However, it is unfortunate, that most people fail to answer this question in a satisfactory manner. If you are asked a question like this, you should shy away from saying that your mother, father, aunt or some other family member has been the greatest inspiration to you; this is simply because the recruiter has no idea who these people are. Rather than doing this, you should choose someone who is a prominent figure in your field of work, preferably someone who has a powerful story to tell and who has been able to make it big in life, despite his hardships.

9. ‘What is the biggest achievement in your career so far?’

This question is hard, simply because most people find it hard to narrow down on one achievement that they should mention. In addition to thinking about what to mention and what not, the additional strain on their mind is thinking about whether the achievement which they have mentioned is big enough or not. Rather than worrying so much or over thinking, it is advisable that you speak from the heart and mention that one achievement which you are most proud of. You can begin your answer by saying that ‘Of the many achievements in my career..’Saying this will communicate that you have had many milestones in your career.

Asking this question becomes extremely hard and even near impossible if you do not know much about the company. In this technological age you can get ample knowledge on a company, by simply browsing the net. You can really impress the judges if you go that extra mile and learn a few facts and figures and quote them in your answer. In addition to doing, this, if you are someone who is outgoing then maybe you can make a few friends with the employees of the company and ask them to tell you a little inside information on the company, just to show that you are very resourceful indeed.

11. ‘What do you hate about the way in which this company functions?’

Answering this question is very hard indeed because if you say something out of line, then you might end up getting on the wrong side of the interviewer. So say something which is not to controversial. Putting forth the interesting ideas which you have for the company, could really take you far.

13. ‘Where do you hope to see yourself five years from now?’

Ensure that your answers really stick in the mind of the recruiters and force them to hire you, so if you are asked this hard question, just answer in a believable manner so that the recruiters do not think that you are someone who simply builds castles in the air.

14. ‘Which would you choose money or power?’

15. ‘Are you someone who blindly follows instructions?’

There are usually two kinds of people in a company, those that blindly follow instructions and there are others who never shy away from asking questions when they think that something is not clear to them. Some companies want people who blindly follow instructions and not question the status quo where as there are those companies who want their employees to raise their voices if they think that what they say will lead to the betterment of the company. It is advisable to say that you are someone who speaks your mind, when you have something to say or ask.

16. ‘Is there something which you would like to ask us?’

Finally, this is a question which is usually asked at the end of the interview and it has proved to be one of the hardest questions because it puts the interviewee in a tough spot. He is put in a tough spot simply because he doesn’t know whether not asking a question will show that he is someone who is not analytical and quick thinking, yet on the other end of things, asking a silly question, would cause the interviewer to think that he is someone who is silly. This final question is really going to either seal the deal for you or not, so ensure that you think careful before you decide to say anything.

So these are some of the hardest interview questions ever asked. On the face of it, it might seem as though these questions are easy to answer and do not entail much at all, yet if they are suddenly sprung on you at an interview you might be completely clueless about what to say. In such a case, you might end up saying something foolish and completely unrelated to the question which is asked. Since you now know that these are the hardest questions ever asked, then you should spend some time thinking of what answers you would give in the event of being asked these questions.