This corporate world used to be a place where there was discrimination against opposite genders of the society, but eventually, such discrimination resolved as time passed by. But there is still some thinking that creates a small line of difference between the working abilities of a male and a female gender.

There are several physical and mental differences between these genders, but in the corporate world, there is a huge difference in the working environment of a male and a female gender. Explained here few differences of male boss vs female boss. 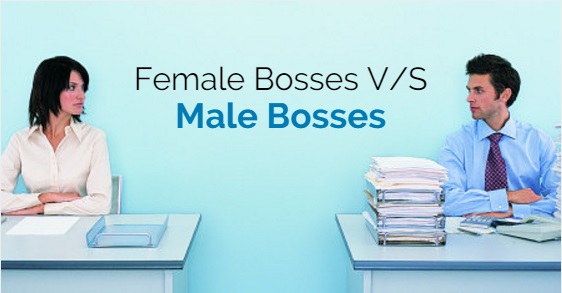 Male Boss vs Female Boss – Does it Make a Difference?

In this corporate world, there is no such thing as a male should dominate an office environment. The fact is that in corporate offices there is no discrimination against any gender.

But there are still some differences of such working genders, which can differentiate based on their working culture and behavior.

1. Quality of engaging their employees:

It is common to understand that while working in the office, a person or an employee experiences some domination of their employers, but such domination doesn’t need to be from a male employer or a female employer.

There is no other explanation for such thinking that females cannot handle the office job. Most of the time people who work under a female employer feel a little offended to follow their order as they are egoistic about themselves.

But in terms of working several tasks at a job, no other discussion will commence that males can handle such tasks in a better way. As a female boss or an employer, they can be better at multi-tasking job than a male employer.

Now, the nature of an office changes completely. Some people are comfortable working under a male boss than a female.

As we all know that in this male-dominated society, creating a separate identity of a woman is a tough nut to crack. It is possible that people won’t agree with the fact that a woman can also handle an office job better than a man.

But most women entrepreneurs have maintained the name of role models in several people’s lives.

Most of the people who are ambitious in their life admire such woman bosses for their way of the job. Therefore, in the case of role modeling, a female boss plays a vital role in those matters than a male.

When it comes to credibility in their working ability it can specify men better than a woman. Most of the people take this very normal at times.

As it shows that people comfortable working around a male boss or an employer and similarly, people take it granted that when it comes to the credibility of a female employer, it always questioned and criticized less in front of male employers.

As mentioned earlier, it is a recent development that changed the outlook of corporate industries. Currently, diversity has created a big change among people.

There are opportunities for female employers in this male dominating society. But still, some people misuse such diversity and make them turn in their favor.

Therefore, when it comes to diversity, a female employer takes a comfortable position than a male employer.

Being a leader or owning a leadership doesn’t require any kind of gender differentiation, but it surely requires a measurement of knowledge and credibility to choose a communicating language of leadership.

Leadership is a position where a person who is capable of handling activities will prefer to seat in such a position.

Therefore, according to some of the researchers, it proved that people prefer female employers most than male employers to seat in such positions.

As the discussion is about something which can prove a statement, whether female bosses are better than a male boss or vice versa.

To create a conclusive statement, a person needs to understand that when it comes to a female employer, the standard of working has been held higher than a male employer or a boss.

Therefore, it is clear that the female bosses hold to higher standards than male employers or a boss.

When comes to micromanagement, male bosses are lenient regarding their employee’s work. Make employers or bosses like to provide some space to their employees as they can create or deliver more efficient work.

But female bosses are not like that. They try to see whether their employees are working as per their given deadline.

Therefore, when it comes to micromanagement female bosses preferred better than male bosses or employers.

For male bosses, it is important to make sure that his company is earning better money in the business than others. Because of such money minds, a male boss can pressurize his employees to work better each day.

That’s why most of the employees prefer working with a female boss or an employer.

As it is common to understand that male bosses are poor with their communication level. Most of the male bosses prefer not to discuss any differences with their employees.

Even if there any serious issues that need to discuss face to face, then it is important to know for a male boss that what is the main issue of such differences. But a female boss tries to talk it out and communicate with their employees about their issues.

Therefore, when it comes to discussing their problems, a female boss preferred a male boss or an employer.

13. Creating a big issue out of small things:

Therefore, whether it is a male or female boss, they need to handle such issues maturely when it comes to their official duties. But rather than such maturity a female boss tries to create a big issue of such small things and these things are not very preferable around an office environment.

Most of their activities are personal stuff, it is even possible that they could handle their housework from the office and they ignore their official duties as well, but male bosses are more focused on their professional duties than their relationship.

Therefore, it is easy to prefer a male boss than a female boss when the question is about their professionalism.

As it is to compare their level of sharing some kind of performance appraisal or credits, a female boss or an employer handles that excellently as she tries to involve all those who have participated in their successful project completion and gives credit to everyone than herself. But when it comes to a male boss it is important for him that he highlights his credibility among everyone.

Therefore, a male boss doesn’t like to share their performance appraisal with their teammates even if they worked hard with them and on the hand, a female boss shares it with her team members for future engagement.

Therefore, employees prefer having a male boss around because of their less arrogance of leadership.

As compared to a female boss, when it is a matter of understanding, a male boss is better preferred because of their understanding ability.

Most of the male bosses are very understanding of their employee’s problems and issues. And being a female boss, it is not so easy to expect an understanding from them because they keep thinking about their equation with them. It is commonly understood that a male boss is preferred less than a female boss.

Patience is a key element that a person needs to understand while working in an office full of employees. Most of the female bosses lack in that subject because they lose their patience in the office for silly reasons.