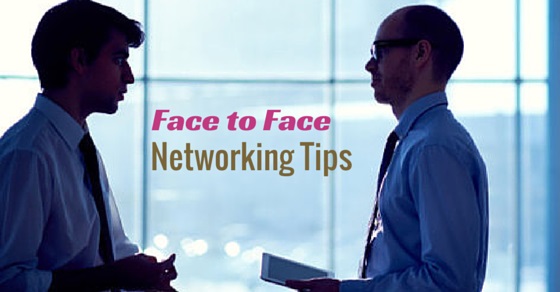 What is Face To Face Networking:

Face to face networking is a method of marketing which is undertaken with the sole aim of building new business contacts by connecting with individuals through face to face meetings.

Importance of Face To Face Networking

It will also enhance the trustworthiness of your client on you. Some of the major reasons why face to face networking is extremely important are mentioned below:

Online networking can be extremely convenient and can make conducting business very easy, but, it lacks the personal connection which a face to face meeting provides.

You can freely express yourself in a face to face meeting. And can make the opposite person understand your needs and requirements clearly.

Exchanging information in the form of business cards and other items is an important step which leaves a lasting impression on your business contacts. This process is possible only in face to face networking.

You can exchange as much information as possible to facilitate the process of boosting your business.

When you attend a face to face networking meeting, you come across a huge number of people from the same field itself. Meeting and confronting them can increase your chances of building your contacts list which in return help your business to grow more.

5. Helps in gauging you:

Face to face networking helps the people whom you interact with to examine you from your body language and your facial expressions.

Sometimes it becomes really important for the people you are interacting you to get a clear idea about you and only a face to face meeting can provide one with this opportunity.

Success in any field depends a lot on getting to meet the right people. This can be better if the meeting is on a face to face basis.

The power of face to face networking is such that most of the business deals that take place, nowadays, are sealed through such meetings. Some tips which can help you excel in face to face meetings are:

When you plan to attend a face to face meeting, make sure that you have a particular aim or goal in mind. Going there without any aim is totally pointless. It helps people get an idea about what your actual purpose is. So, chalk out the plan and purpose in mind before going for it.

Going for a face to face meeting on a serious note is not recommended because this can make people reluctant to talk to you freely.

People might think that you are a very serious person and might straight away start a discussion over a difficult topic. So, it is necessary to smile and indulge in a bit of friendly talk.

3. Make people talk about themselves:

Being a good listener is extremely important in face to face meetings. Getting involved in other stuffs while the person is talking can put people off.

Be attentive and present-minded so that the opposite person thinks you are giving value to his ideas and requirements.

Carrying business cards with you while going for a face to face meeting is extremely important so that people remember you from the details on the business cards. Exchange your business card with people so that you can build a good network of people.

Make sure you follow up on your face to face meeting by contacting the people you met. You can also build your by e-mails or by using social networking websites. Always stay in touch with the people whom you have met during face to face networking.

Make sure that you are the first one to break the ice in a face to face meeting because this helps in creating a good impression about you.

Ensure that you arrive early for the meeting. Start up the conversation in a casual and friendly way to ease up the environment.

8. Give reasons to choose you:

While engaging in a face to face meeting, make sure that you do not carry on with futile claims about yourself. Instead, you should ensure to highlight the major reasons why the person should choose you over the rest.

9. Give examples of your work:

Giving examples of your work is a very effective way in which you can impress people because it gives a clear idea about your capabilities. You can also give some references to any of your case studies.

It is extremely important to praise people in between because this will help them feel special and will also help in creating an impression about you.

If your first face to face meeting with a person did not turn out to be successful, do not give up. You should give another try because building a relationship cannot be done quickly, it takes time.

You should make sure to speak confidently because this will help people to choose you over others. Confidence matters a lot in such meetings.

If you had promised to call a person for a follow up after the face to face meeting, make sure you keep your word because this ensures your credibility. People will be able to trust you more if you promise something.

Saying thanks is an extremely small thing, but, it is very important in order to make your contact feel valuable and special. This will be a very good gesture on your part to create a good impression on your contacts thus building good terms with them.

Advantages of Face To Face Networking:

Face to face networking is considered to be an important way to build relationships. This type of networking boasts of various advantages, some of which are mentioned below:

This type of networking helps people to get engaged in long and detailed discussions without any disturbances. Face to face meetings are fixed at a certain place and at a certain time.

Face to face networking helps in encouraging teamwork by discussing about team goals and also by deciding on ways to achieve them.

In case of face to face networking, the feedback which you get about your business will be completely honest.

This type of networking helps in showing people every aspect of your personality. And in the process you can let them know your potentials and strengths.

Another great advantage of face to face networking is that misunderstandings can be completely avoided because if there is any misunderstanding, you can clear it out instantly at the spot itself.

A job interview is usually conducted face to face. Face to face networking will train you on how to act and speak in situations when you are being interviewed by an employer.

In this type of networking, you do not have to wait to get a response because you get the feedback right away. If you have any queries, they are answered immediately.

Face to face networking is also beneficial for those on a job search spree because when you go for an interview, it narrows the list of people who are competing against you.

This kind of networking is also preferred because it ensures that your message is clearly understood by a person.

ace to face networking allows you carry on discussions back and forth, which is not possible in the case of online networking.

Disadvantages of Face To Face Networking:

Even though face to face networking is extremely beneficial for creating long term relationships, it does have a few disadvantages, such as:

This type of meeting takes a lot of time, which sometimes results in the drawback of the company because time is money and time is considered to be extremely precious in today’s busy world.

Another disadvantage of face to face meetings is that there is no particular leader in this format. This results in the discussions getting longer without sticking to the agenda.

Face to face networking involves a lot of travelling and this costs the company a lot. This is one of the major disadvantages of this type of networking.

There are chances that a conflict can worsen up in face to face meetings. Arguments tend to get heated up during such type of meetings.

A comparative study will give you a detailed idea about which type of networking is better and which one suits you the most. Some comparison points are mentioned below: