What is an Exit Interview?

An exit interview is a process where an employee who is leaving or taking voluntary retirement from the company needs to conduct an exit interview, collect all the details and provide information about the present situations of the company.

In such an exit interview process a person informs all the details about growth and relevant changes that needed to execute for the sake of the development of the company. An exit interview is beneficial for the company where they can indulge changes in their company. 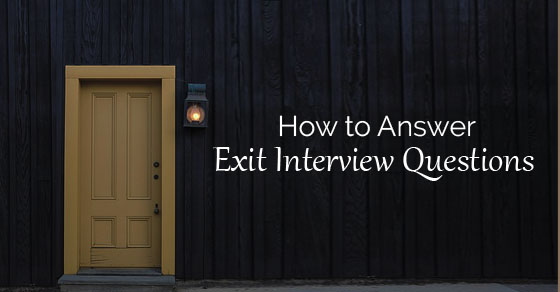 Main Purpose of an Exit Interview:

The main purpose of such an exit interview is that it helps a company to understand the present strength of the company. An exit interview is conducted for the sake of understanding the current year growth and some of the developmental changes that needed to cultivate in the industrial environment.

An exit interview is conducted to collect all the details regarding the actual situations of the company, and while finding out such details the company will notice those employee records who have given their loyalty to the company and who have actively participated in the development of the company.

Therefore, through these exit interviews, an employer of the company will create a considerable change in the workplace performance, which should be beneficial for the overall development of the company.

An employee who takes charge of such exit interview finds out all the legal detailing about the company. It is necessary to check all the details of the company so that there won’t be any kind of company issues which needs to be resolved soon. And if any kind of issues come up, then the company needs to resolve it immediately so that there won’t be any further delay in solving those issues. Therefore, it is necessary to keep maintaining those legal documents of the company.

5. Communication between the alumni and the organization:

Exit interview creates a way where the company alumni will communicate with the organization of the company. It is necessary that most of the communication between those two parties may not end positively, but the discussion regarding company development needs to be executed in front of both of them.

Therefore, it is understandable that the alumni and the organization of the company need to keep communicating with themselves during an exit interview to resolve any problem.

Expectation Relating to the Exit Interviews:

There are some kind of expectation that the company expects from their employee during the exit interview. And they are,

It is one of the main things that the human resource department expects from their relieving employee. It doesn’t matter whether it is an interview where a person gets to be questioned about the company so that he/she can get relieved of all the duties from that company.

Therefore, it is very much essential for any employee whether he/she is joining the company or leaving the company, there are some kind of professionalism that they need to maintain during their exit interview.

2. Plan for the session:

It is common that a person prepares himself/herself before appearing in the interview, but similarly, it is very much essential that a person should understand that any type of interview needs to be presented with a certain kind of preparation.

It is important to understand the situation where a person can get stuck and how to get out of it. Plan for the session of an exit interview so that a person can prepare himself/ herself in front of the HR team to generalize his / her exit.

3. Address yourself with a positive exit:

Most of the time it happens that some of the exits from the company that he/she have worked for so long years creates a situation where a person gets too emotional or too angry about some things about the company.

5. Conduct an own exit interview:

Exit interviews can be a little different from other interviews that can be conducted in other phases of the department. During an exit interview, it is important that a company understand their growth in all those years of the company. And it is beneficial for the employee if he/ she could have collected some details of his / her personal exit interviews for their better future. Therefore, it is necessary to conduct their own exit interview.

There are some of the measures or Do’s that need to be followed while attending an exit interview and they are as follows.

It is necessary for the person who attends such exit interview that in spite of being retired or relieved from the duties of the company, he/she can be maintaining a certain level of professionalism while presenting himself/herself to the company and to the human resource department. Therefore, being a professional can be a first and foremost thing to do while attending an exit interview.

While an exit interview an employee would be expecting a certain kind of judgments that he/she needs to be answered. Therefore, it would be advisable that a person needs to be prepared with some of the judgments which the company need to hear from the employee for the betterment of the company.

It is common to experience nervousness before attending any kind of interview, but during an exit interview more than being nervous, employees feel negative about their situations in the company. Therefore, it is advisable that an employee should be positive during his / her exit interviews so that there won’t be any kind of unlikely situations among themselves.

Don’ts of an Exit Interview:

There are some things that shouldn’t be followed while attending an exit interview and they are as follows.

It is not so great if an employee exits from the company as respectfully as he/she had entered the company. And it is advisable that during an exit interview an employee need to be positive about their exit from the company. It would be good if he/she behaves in a manner that the company should regret their decision of letting you go. Therefore, it is a good practice that an employee performs to leave without any complaints.

Most of the exit interviews end with a statement that the employee who is retiring from the company is actually hated to work there and felt worse about it. Therefore, it would be appreciable if an employee relieving from the duties of his / her like to be more polite while they exit. It is unprofessional if an employee tries to use such words as hate and worse in their conversation with the company.

The following are few employee exit interview questions with answers.

1. Why do you want to leave this job?

It would be good if an employee answer is that he/she wanted to work in the company for a certain period and it is right time that he/she starts his / her own practice.

2. How do you rate our management and skills?

An employee can start his / her answer by saying that he/she is happy with the company management and their skill, but there is still some space where there is a scope for improvements. And it would be great if the management improves it.

3. How to inform your superior about your decision?

An employee should answer by saying that he had already sent an official formal mail to his / her superior and also add that they both share a good rapport of professionalism. And before going I would personally go and meet him/her to deliver my gratitude.

4. Were you happy with your supervision?

An employee needs to answer by saying that “yes! I was happy with the supervision that I received from the supervisor” and mention that it was a pleasure working with a supervisor like him/her.

5. Did you expect that the company would meet your career expectations?

An employee needs to answer by saying that yes! The company helped him/her to learn more about the skills and abilities which he/she lacks in his/her professional course.