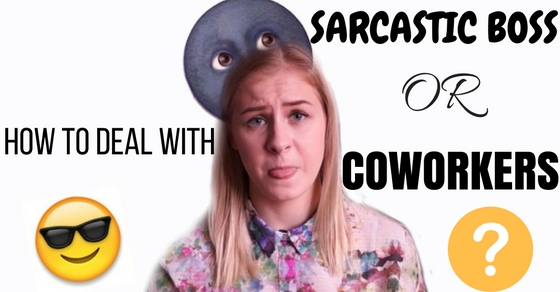 Surviving and being a relevant part of today’s business world is no tough task at all. If you want to go ahead in your career, you must make yourself a little strong both physically as well as emotionally so that you will be able to survive whatever comes your way.

Dealing with sarcasm at work is never an easy thing to do, but if you wish to retain your job, it is very important that you learn to deal with them in a proper and effective manner. Things will not be easy at first, but over time you will get used to it. How to Deal with Sarcasm at Work?

1. Work on your own self-esteem first:

In your work place, it is very important to always act in a professional manner. The moment you act in a childish way, then people will begin to lose some respect for you.

Always maintain a stern exterior so that people take you seriously. Just because a person is being sarcastic, you need not take it to heart. Just learn to be a little thick skinned so that every little thing does not hurt you so much.

It is of paramount importance to work on your own self-esteem first and foremost so that you are more adept at dealing with complex situations like this.

2. Is the sarcasm only directed to you?

If your boss or co worker constantly acts in a sarcastic manner, then you must think about whether this sarcasm is solely directed at you, or whether others too are at the receiving end of it. If it is always only directed at you, then maybe you should spend some time thinking about why it is so. If they act in the same manner towards others as well, then you know that it is nothing which you have done to irritate them in any way.

To understand whether the person concerned is only sarcastic to you or not, all you need to do is keep an eye out and observe.

3. Think about what urges the individual to be sarcastic?

Different people need to be treated in different ways. Some people are easy to deal with, but as opposed to that, some people have complicated natures.

If you notice that your boss or co worker is sarcastic then you need to take note of what urges the person to be sarcastic. Once you have noticed that, then you should just not do those things. This having been said, do not try to be something you are not, just because of another person.

If the individuals sarcasm is prompted by your success, then you should not make much about it, rather just feel flattered.

4. Think about how biting the sarcasm is?

However if the sarcasm is very biting as well as bitter in nature, then it is something which you should not take lying down. The moment you are quite and act in a humble and meek manner, people are bound to take advantage of you.

5. Do not lose your temper or be flustered:

The moment you start reacting to the sarcasm by losing your temper or being flustered then that is going to show you in very negative light. When working in a big office you learn to deal with issues like this.

In the early years of your career, things like this are sure to leave you feeling bad, but over time you will become more mature. Then such sarcastic people whether your co workers or even your boss, will not play on your mind at all.If you lose your temper then that will just prompt the person to get even more sarcastic with you.

6. Accept it as a part of their natures:

For most people sarcasm is something which comes naturally. So if you realize that the person is not trying to deliberately being mean then you should just accept that the sarcasm is part of his or her nature.

Rather than always trying to change people for the better or worse, you should just try and be as accommodating as you can possibly be. Keep in mind that finding a job in this day and age is not a very easy task at all so think twice before doing anything which could easily get you fired by the boss. Almost all employees dislike their boss, so don’t take it too much to heart if your boss is sarcastic.

7. Try and ignore it as far as possible:

Sometimes rather than trying different ways to cope with the sarcasm the best thing which you can do is simply ignore it. If the person finds that you are not someone to notice all these childish things, then sooner or later he will get the hint.

Silence is something which is often more effective than words. This method has proved to be the most effective when it comes to dealing with people who are sarcastic.

So whether it is your boss or co workers simply implement this technique and everything will be fine. Getting on the wrong side of people by picking a fight is often not a good idea.

8. Try acting the same way with the person concerned:

Sometimes people mistake your silence for weakness and they end up taking more advantage of your goodness. So if you find that the sarcastic individual, whether your boss or co worker refuses to take the hint from your silence, then maybe its time that you start paying person back in their own coin.

If you are not sarcastic by nature, then you should consult someone who is into speech and theatre and he or she will tell you how you can learn to speak in a sarcastic manner. However ensure that after the lessons, you too do not turn into someone who is very sarcastic.

9. But if the person is very hurtful, then do not stoop to that level:

Sometimes acting in the manner the person’s acts is a good idea, but this is only if the persons sarcasm is not too bitter. If you notice that the sarcasm of the person is extremely bitter then you should ensure that you do not stoop down to his or her level.

If the person has evil intentions in mind, then sooner or later the person will be punished. Once you stoop down to a person’s low level, then you too become someone who is degenerate. So try and rise above all of this and always maintain your own self respect at all times, no matter how tough it is for you.

10. Do not let their sarcasm affect your work in any way:

When you are trying to deal with such a sarcastic boss or co worker, you should not channelize all your energy towards that task. When in office you should give your best towards your work under all circumstances. Just because they are being sarcastic, do not stop focusing on the tasks which you have at hand.

As far as possible keep your own feelings under wraps so that you impress all your superiors with the quality of work which you deliver at all times. Very often, bosses are deliberately sarcastic to their employees, just as a test to see how the employees deal with pressure of this kind.

11. Minimize your interaction with the people concerned:

If your boss or co workers are extremely sarcastic in nature, then try your level best to keep your interaction with them to a bare minimum. The less you talk to them, the less you will have to deal with their sarcasm at all. If the person is your boss then naturally you must interact with him occasionally, but you should speak only as necessary, and not more than that.

Maintaining a distance with such people is often an effective way to deal with the matter. If you say an unnecessary thing that is going to do nothing but prompt some sarcastic comments from the other party. So do not go asking for trouble.

12. Talk to the person about it, if it affects you:

Rather than thinking of silent ways to deal with the matter. You should try your hand at being a bit vocal. If you are open and honest with the person concerned then that is going to be a very mature way to tackle the situation. If you keep trying to hold back your own feelings then that is bound to take a negative toll on you both physically as well as mentally. Talking it out gives both parties the time and occasion to talk it out in a proper manner. Even if the person is your boss you need not feel bad about bringing to situation to the open. State categorically that you do not like the sarcastic comments.

13. Try and laugh it off whenever possible:

As far as possible, you should try laughing off the sarcasm so that over time the person realizes that you are not someone who will take such a sarcastic person seriously. Just keep laughing things off and soon enough the person will realize that you have become a joke to him. This is bound to get the person to stop acting in such a sarcastic manner. This is a very smart way to tackle such a situation as it is bound to silently communicate to the person concerned that such sarcastic talk will not be entertained by you at any point in time.

14. If it goes too far, speak to the HR department:

To a certain extent people are willing to bare nonsense. But beyond that point people find it impossible to endure any more tension. So if you find that the sarcasm is bordering on harassment then you should not think twice before complaint to the HR department. Rather than trying to take matters into your own hand you should hand over the matter to the party that is best able to tackle the situation. Do not think twice before reporting the matter so that the guilty people can be punished and put into check.

If you think that others in your office are facing a similar situation then you should take the time to ask around. If all of you who have been at the receiving end of the sarcasm stand united against the guilty party, then that is bound to make a loud and bold statement.

16. Quit your job if you find things to be very unbearable:

If all other ways of dealing with the crisis fail, then you should not hesitate before handing in your resignation. As an employee in any company, no matter what your position is, you should be given the respect which is due to you. No one has the right to talk in a nasty or sarcastic manner to you.

When you are dealing with sarcastic people, you need not put all of the above things into action. Even if you are able to successfully try out one or two things, then circumstances are sure to improve for you.

Just because your boss or co workers are sarcastic, that does not mean that you should hand in your resignation and seek employment somewhere else. However, if you notice that things are too much for you to bear, then you could consider seeking employment in some other company. At all points in time, do whatever you think is best, after all you know what is best for you.

Artificial Intelligence in CRM: What are the Benefits?