Working excessively can be termed as a condition which creates an environment of compulsive working disorder. Being workaholic can be positive and negative as well. Positivity of workaholism can be resulted through successful career, but the negative side of workaholism can be measured in terms of distant social and personal relationship. 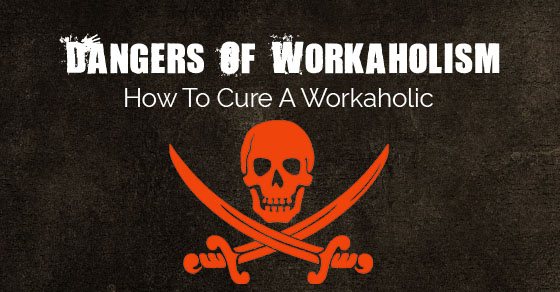 According to the researchers working compulsively can create workaholism and which can ultimately affect a human mind and body in a negative way.

Being workaholic can affect a human body and mind in a negative way. When a person starts experiencing certain changes in his / her behaviour around the office or home, then a person should understand that he/she is going through some kind of changes and those changes can make him / her end up being a workaholic.

To avoid such changes in his/ her personal or professional life, a person needs to rectify such issues and try to solve it. And stated below are some of the symptoms of being workaholic.

A person need to work as per his / her credentials, but working out of one’s credentials is never going to pay more in their salary. Sometimes there is a possibility that being less free also can get you mad or crazy.

2. Working during free hours such as lunch or tea breaks:

A workaholic person doesn’t care about his / her personal time. They normally can be seen working all day long. The highs of being a workaholic can be that a person works even during his / her free hours such as lunch breaks or tea breaks.

A person needs a certain amount of personal space from his / her professional life. It is not at all healthy, that a person has been working for hours and ignoring his / her personal time with family or friends.

3. No personal habits other than working:

A workaholic person ignores all the necessary elements of his / her life which can get him/her mental and emotional peace. Generally, it has been seen that a workaholic person doesn’t really have any personal habits for which he/she can take time for.

To avoid such issues in one’s personal life, a workaholic person needs to find a way to avoid his / her urge for excessive working. The best way can be that he/she should start being active in sports or anything whichever he/she interested in.

4. Being free can stress you out:

As mentioned earlier, there may be a possibility that a person working excessively may start experiencing that he/she gets stressed out without any work. A small amount personal time can never harm a person and it is always better to spend time with oneself and to do that a person doesn’t need to indulge him/herself in the busy working environment. Normally people keep themselves busy just to avoid or ignore some things in their life.

A workaholic person can turn him/herself in a way that they can get themselves unsatisfied for most of their work. They turn their self into working to make sure that they satisfy their excessive working nature.

Ignoring personal duties can make a person end up being alone in his / her life, which is not at all good for his mental and physical stability.

A workaholic person never takes leave or holiday from his / her work which is unhealthy for that person. When a person gets stuck in a very unfavourable situation at work and gets too frustrated about it, then it is a signal that a person needs a vacation from his / her work.

But sometimes people ignore such parts of their life and keep on working 24*7. And through such kind of excessive work a person can lose his / her mental stability as well.

Being an excessive worker a person can start experiencing things such as even after spending time with his / her family, it is possible that his her mind is still stuck in his / her work. And that is a stage of workaholism where a person needs to be careful of handling oneself.

Working for a living is a part of every person’s life, but living for working is a very wrong way of treating things. To avoid such things a person need to relax themselves and think about the present instead of their future.

9. Working during weekends or sickness:

A person who works during weekends or being sick can be professionally treated as a workaholic person for sure. Weekends are meant for relaxation and fun, but there are some people who take weekends as a waste of time and instead of enjoying their weekend, they try to invest that time in their work. Try to enjoy weekends to relax yourselves.

Excessive working can create an environment for a workaholic. Being workaholic can never favour a person in any manner. There may be a possibility that a person who used to enjoy being occupied, may start feeling frustrated because of his / his excessive occupancy.

Therefore, to avoid such situations a person needs to prepare a schedule or start scheduling his / her daily life in order to take everything normal and in control.

This is the phase of workaholism which can help a person manipulate certain works. But it is not favourable for a person all the time. Multitasking can be termed positive for a person who can handle more than one work.

But when it comes to a person who is in a verge of being a workaholic then it is possible that a person can lose his / her mental stability during such multitasking and it is better to start taking things slowly.

How to Cure a Workaholic Addiction:

Being workaholic is not an incurable disease, it can be treated well with certain types. And here are some the ways to treat workaholism, they are as follows.

It is always better for everybody who are normal or workaholic to schedule certain fixed time for their working period. By fixing a certain time for their work can bring an environment where a person can maintain a proper period of time for his / her working hours.

A good employee of a company should follow a rule that he/she should work for the period of time which has been allotted to him/her and not more than that.

Instead of working for hours and being busy all the time, a person starts taking small breaks in between so that his / her working ability can be controlled positively. By taking a small break or vacations, a person can make things easy for him/her. This can always help a person get out of such a workaholic zone forever.

There are people who think that if a person doesn’t work for an initial period of time, then there is a possibility that he/she may be left behind in this competitive world. But having such a mindset is very clichéd.

To be free of such a mindset, a person needs to initiate certain steps that can create a remarkable change in his / her professional life which can help that person come out of workaholism.

There may be a possibility that a person being workaholic can start ignoring a certain part of their life which is very essential for them. By ignoring such things about his / her life that person can end up being a compulsive worker which cannot be controlled.

And to avoid such situations a person needs to understand his / her priorities of life which can help that person to be normal and understand the value of personal space.

Working in an office for hours and keep taking pending works at home is not a great habit for oneself. Because our home is a place where a person can enjoy his / her personal life without any deadlines or ultimatums. A free life without any tension and frustration can bring inner peace and that can only happen if a person draws a line between professional and personal life.

It is possible that by meditating for some time, he/she can find inner peace for themselves and can eliminate negative energy around themselves and also can create a positive mindset to get rid of workaholism.

A person being a workaholic can make certain changes in his / her personal or professional life which can be very dangerous to themselves. And to avoid such a situation the same person can take initiative to start creating certain boundaries to maintain his / her workaholic problems.

By setting a standard type of boundaries, a person can make certain changes in their life and can make them strong enough to handle such critical situations.

The most important change or treatment for a workaholic person would be making time for his / her loved one’s. By spending time with loved ones a person can start taking steps out from his / her workaholic zone.

Being a workaholic, a person starts ignoring their loved ones and end up being workaholic or alone. To avoid such situation maintain a standard boundary which can help a person to come out of his / her busy life.

Therefore, to understand the positive and negative effect of bringing workaholic, a person needs to read all the above mentioned details to rectify the place where that person stands in the situation of workaholism and also follow certain mentioned steps to come out of the workaholic environment.