The more people who you need and interact with, the better it will be for you in the long run. To help and guide you along your way given here is a list of ways to help you to communicate and interact with people belonging to different departments of your company as well. 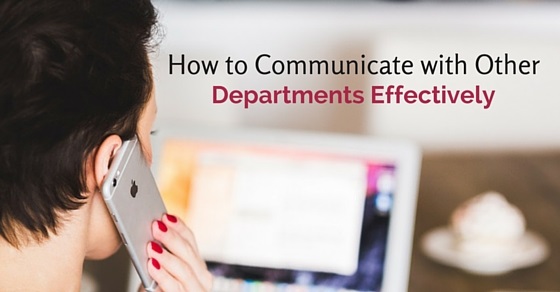 16 Tips for Improving Teamwork and Collaboration Across Departments:

The following mentioned are few tips on how to improve communication between departments and also about teamwork collaboration.

1. Do not think of them as being different from you:

When you are an employee trying effective communication in workplace with other departments of the office then the first and foremost things which you need to keep in mind is that at the end of the day all of you are just people so if they are cordial as well as polite then you are most certainly not going to have any problems at all!

No matter which department it is or whether the department is considered as being higher or lower to the department which you belong to, that should not alter your mannerisms in any way. People should only be considered based on their own individuals merit at all times.

2. Think about things which you have in common with them:

If you are trying your level best to improve communication in the workplace with people of other departments, then what you need to do is think of things which you might have in common with them so that you can use these as conversation starters.

3. Do not act high handed in any way at all:

When trying to approach and communicate in the workplace with people from other departments, you should not make it seem like you are doing them a favor by gracing them with your presence.

If you act in a high handed and proud manner then no one will communicate with you or even talk to you. So no matter what, ensure that you have the right body language as well as facial expressions to avoid putting people off by the manner in which you behave. How you act will give them an insight of how you are as an individual.

4. Make it seem like you are extending a hand of friendship:

From the very first time that you approach the people of the other departments let it not seem like you have come bearing ill will, rather let them know at the very onset that you have come to extend a hand of friends and just get to know the people who work under the same roof with you, just a little better.

When you speak from the heart and do not act oddly, then people are going to appreciate this gesture of yours. Yet this having been said there is a fine line between being friendly and being over friendly, so ensure that you are mindful of this and do not act in a manner which is inappropriate.

5. Talk about things occurring beyond the walls of the office:

If you are at sea about what to talk about with the people of the other departments at work, then maybe it would be better that you think about things to talk about which are occurring beyond the four walls of the office, such things might include burning political issues, discussion on the economy or even something as every day as the weather.

6. Don’t start off by being too casual in your manner of speaking:

No matter how badly you want to make some new friends and enlarge your friends circle, this does not mean that at the very onset you start talking to the people of the other departments in a casual as well as flippant manner.

It is important to ensure that at all times you are mindful about what you say and check to see whether or not they are interested in talking to you or not. Once you get to know them better as individuals and know categorically who is your friend and who isn’t then you can take things a step further and start talking casually.

7. It is not alright to make fun of seniors no manner what:

In the event of becoming a little close to the people belonging to the other departments, you should never go so far as to think it is alright to begin to make jokes about the seniors or bosses of the company.

If you are caught doing this then chances are that not only will your name be tarnished in the company, but you will certainly run the risk of losing your job. Keep in mind that having good fun and making a joke is not a bad thing provided you stay well within your limits and not hurt the sensibilities of anyone.

8. Do not share information about what is happening in your department:

If you have decided in your mind that you want effective communication in the workplace with people belonging to the other departments, then this is most certainly a very positive thing indeed and you should be very proud of yourself, yet this having been stated, you must ensure that no matter what or no matter how close you get to these individuals you should never divulge intimate information about what is happening in your department to them. The business world is a crooked one indeed and you can never really tell who your real friend is, and who isn’t. It would benefit you greatly to never let your guard down.

9. Ensure that you do not indulge in any petty workplace politics:

Getting to know more people is always an advantageous thing as you never know where you must need help or assistance from, this being said, in the event of trying to win a few brownie points you should ensure that you are not indulging in any petty workplace politics.

Healthy competition in the work place is something which is good and brings out the best in workers, yet you trying to communicate with others should not be with the intention of trying to gain popularity or trying to look for some personal gain. Remember to let your conscience be your guide at all times.

10. Do not grow distant from people working in your own department:

Once you have been able to break the ice with the people for the other departments at work, ensure that you are not growing more distant from the people of your own department in the bargain.

If you seize to work in a proper manner with the people in your own department then trying to complete even the smallest bit of work will prove to be highly difficult for you. So ensure that you learn to balance things out at the office, so that you maintain your peace of mind, because at the end of the day, ‘too much of anything is never a good idea’.

11. Do not get your personal life mixed up with your professional life:

As mentioned above, talking about things occurring beyond the four walls of the office is a good thing, but this certainly does not imply that you start bringing your personal problems to the office and start discussing them with the friends which you have newly made.

Companies dislike it greatly when their employees are unable to separate their private lives with their professional lives, so ensure that you do not become one of those low people who start washing their dirty linen in public and making everyone uncomfortable in the bargain.

12. Ensure that you are also being a good listener:

When you tried your best to strike a conversation with someone and you have put forth your point of view on the subject you should ensure that you are also giving ear to what other people have to say as well.

Listening is an art in itself and if you are not a good listener then you should try your level best improve your listening skills so that when you are trying to communicate with people of another department, you do not make a fool of yourself and come across as someone who is not merely ill-mannered for also very rude and coarse as well.

13. Do not try to sound too smart and erudite at any point:

In the event of trying to make a good impression while communicating to the people of the other department, you should not shy away from being yourself. You should always be yourself no matter what, if they like you as you are then, that is most certainly a good thing, but on the other hand if they do not, then that is their problem and there is nothing which you can do. If you put on a show and feign erudition in any way then you can rest assured that there will be no one who will want to converse with you in the time to come as well.

14. Think about the best time to communicate better at work:

Equally important as knowing what to say is knowing when to say it ! You must make it a point to think of what the best time would be to go up to the people of the other department and start talking to them. This being mentioned, ensure that you do not try to strike up a conversation when they are busy or they will not be able to give you their undivided attention.

One of the worst mistakes you can make when trying to communicate effectively with other departments is over thinking about each thing and rattling your brains about how to go about talking to them. Just keep an eye open for opportunities which present themselves and do not worry so much!

16. If things don’t work out continue to be cordial to one another:

In conclusion, if after all your efforts to try and communicate effectively with the people of the other departments you notice that they are just not being open and receptive to you, then there is nothing more you can do to change their mind. Once they have made up their minds to act in that manner then do not push the matter anymore.

If you are the sort of person who doesn’t like to talk and interact much, then you should try your level best to come out of your shell and meet new people. If you are not open to new experiences then you will be missing out on a great deal in life. Initially going out of your way to interact with these individuals might not be easy at all yet over time you will realize that they too are just people and you need not think so much before starting a conversation with someone.

Getting to know more people and making new friends can never be a bad thing, so do not shy away from communicating with people from other departments.