If you’ve ever had a colleague/ co worker who spends most of his day on Facebook or online shopping or just keeps delaying work no matter what you tell them, we do empathize.

Working with someone who procrastinates and slacks off is never fun. Not only does your colleagues reputation get ruined but also ruins yours. And if you want to take care of that, try all of these steps mentioned below. 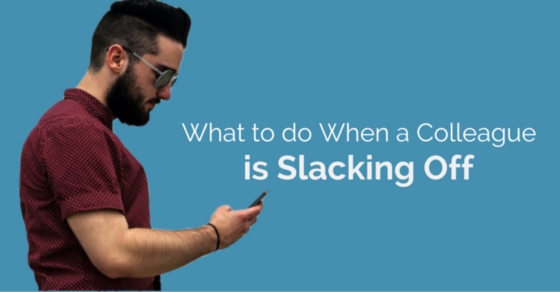 What To Do When a Colleague is Slacking off?

1. Don’t allow such people to distract you:

It is not your duty to worry about what your colleague is doing. So even though it feels annoying and difficult to be around them, just ignore and continue to focus on what you are doing.

Some experts have stated that people actually spend a lot more time noticing others instead of spending time on finishing their own. You don’t have to be that person. Don’t bother whether they are stuck on Facebook or messaging someone. Just do your own thing and get done with the assignment.

2. Don’t work around them unless it is needed:

Most people are busy these days that they do not have the time to take care of someone else who hasn’t been focusing on their tasks, especially if they know that is going to lead to a major problem.

It is vital to do this when you are held responsible for finishing the work. But if this is not urgent, then let your co worker just be where they are. They will get their bit of work done or you can just keep insist on getting the work done and finishing what you are in need of.

The worst case scenario would be reaching the managers ears. Always remember that it is not important what your co worker is doing the rest of the day. It is vital to know if they have finished their task or not. So stay when you are needed, make them finish the task and then go back to the usual. That is it!

Another alternative you can try is by simply letting them know that they’ve been noticed so far by you and that your peers agree with the same. Someone who is of a higher post in the office has noticed the negligence as well.

There is no need to get all angry and aggressive while speaking, especially if the co worker does not report to know. All you have to do is let them know how they havent been finishing their assignment and are slacking off and that it is affecting your project. If you are comfortable telling them this, then also say that you are aware of the impact it can have on the whole team. Just be straightforward and honest.

Also note that some people often tend to work harder and hide that with slacking, especially from you but the result could have no difference. You don’t have to worry about that. All you need is your results.

4. Speak to your manager:

Again when your manager is not the co workers manager, you could let your boss know about it. Speak about how frustrating it is and that you going through a tough time while trying to get an answer from your co worker, especially because she has been spending all day and night on Facebook and the web instead of checking their emails and taking your calls. Your boss could actually give you a better solution. Or who knows? They could be willing to speak to your co worker who is slacking off.

Another alternative here could be focusing on your stuff instead of pointing fingers at someone else. But that also depends upon the relationship you have with them and there are chances your concern could be genuine.

5. Talk to their manager:

Now this is a nuclear option and you may or may not try this. But if things are getting worse day by day and you really think that something needs to be done in order to get the work completed, then you have to report their incessant game playing when they should be working.

We would advise you not to snoop around on your co worker. But before you speak to their boss, make sure you have been armed with some solid examples that explain their poor performance. Also you should speak about how their performance is having a negative impact on you and that sometimes you have to spend extra time since they haven’t completed theirs. Say that it sucks that they have time for Farmville and not the assignment.

All you really want is to get your work done and nothing else. Again please remember that this is the last thing you are supposed to do. Don’t resort to it unless it is really needed. There are other ways you may also try. If they all have failed then you can try this.

6. Remember that you aren’t aware of what is happening behind the scenes:

Even though it is very easy to assume that your co worker is procrastinating and not getting a thing completed, you are very unlikely to know if something is being done.

Managers don’t always broadcast disciplinary actions to others and most of the employees don’t ever spend time on bragging that they were recently told that their job is in jeopardy if they don’t do anything about it. So even while it is impossible that nothing is being completed, it is vital to remember that it is not the kind of information you should be aware of.

Now this is the last technique we would suggest you try. But of course that does not mean you will not be honest and raise your voice. The process is a bit tricky to be honest. It is dependent on the current situation and the relationship you share with your boss.

There are a few who will thank you for informing them and say that they will take care of the matter while there are some who will say it is wrong on your behalf to worry about someone else’s performance.

So what should you do? Simple! Just tell your boss that you aren’t in the position to handle things in your own and would like your colleague to help you finish the assignment. In that way you will not only make a strong valid point but also protect your image from getting tarnished.

8. Try to show your leadership skills at this point:

If you are smart enough, you will turn tables around and use this opportunity to show your peers what you are capable of. So when you are talking to a senior, let them know that you have seen your colleague showing very less interest towards work and that you would like to finish it instead.

Say that the final dates are coming and the work can’t be delayed. This will make you look like a leader and your boss will begin to have a better impression of you.

Do not allow your co workers attitude and habits become dangerous to your surroundings. What could be unfair in cases like this is that he or she could be putting less effort in you.

Always remember that this person is trying to build a temple reputation while you are presumably creating a great impression. This means you are looking for professional opportunities for yourself and it is his impression that is being ruined in the process.

No matter what you do, make sure they aren’t making your life difficult. Don’t spend way too much time with them either. In case they start making conversation with you, let them know that you don’t have time for them.

According to experts it is quite tempting to follow people like this and get away with it but make sure you are not involving yourself in this.

Your co worker might not be the most fun person to work with and it is surely not fair if they are sick all week and expect you to finish all their work. But policing their behaviour is certainly not your responsibility.

You have better places in which you can turn your attention. And even though it does suck to hear them whine and complain constantly, the best thing you can do is spend time and energy on things you are doing.

If your friend is a serious distraction, then you have to look for a proper solution. Either you let them know or speak to the manager. So act in a matured way and use management as the last option. On that note, good luck with the colleague.