If you love movies and have always wanted to be a part of the glamour world, this post is for you!

You don’t HAVE to be an actor to enter the entertainment sector but still make millions of dollars.

There are plenty of careers in film and television for those who want to work in Hollywood and earn a good name for themselves.

Since you are hoping to do just the same, we have lined up some great careers in the film industry or jobs for movie lovers, you will love.

Read them carefully before making the final choice. Best of luck! 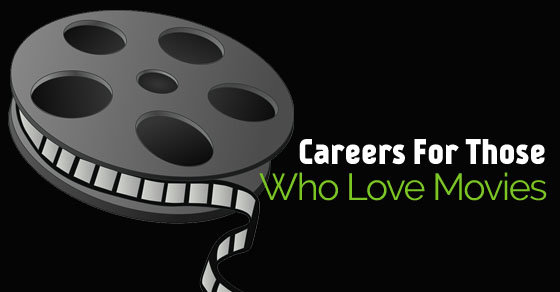 The following mentioned are few jobs in film and TV.

This is probably one of the vaguest titles you will ever get to see in Hollywood. A producer could be anybody.

He could be an investor, an idea man or a writer. The main point is that he is the manager of the film. He is also the head and executive producer and the cost of the film, its expenses are entirely dependent on him.

He is also responsible for hiring the director, screenwriter, and production staff. From the lighting crew to editors, all fall under him.

Directors are much needed in every film. These guys give the film an artistic vision. Without a director, it is impossible to do a film.

Those who are involved in the financial side of making films don’t become directors, but of course, the situation will be different if they are wearing many hats.

The director is also someone who works closely with the screenwriter and the producer is someone who can come up with the best ways to present the script and its themes.

A director who is experienced will have a good list of the art directors, cameramen, casting directors and actors. They also help the actors learn new emotions and do a good job on set.

What you have to do is write the script properly and then shop around to a few producers and agents who could hire you depending on how your script is. They could also buy your script at a good cost.

Some screenwriters are well experienced and don’t need to write a script either. Some of them are also hired later once the producer and director have an idea and want someone to work on it.

In big film studios, it is not common for screenwriters to take away the credit for the same script. They all start as journalists and novelists before they get into the business.

Editors and filmmakers also play a very important role while making movies. This job could be the least glamorous but surely fetches a lot of money.

A skilled editor will always select the scenes, and individual shots and tell the director what would look best.

Editors also tend to spend some of their days and nights in front of computer monitors and edit audio and videos for hours.

There are bigger film projects that will require several editors and their task here is to make sure the film looks good. Back in 2010, they earned $74000. It must have increased a lot by now.

Actors are what make the films successful. But being an actor is not easy. There are thousands of people across the world who have the same talent as you do and are hoping to get a big acting break soon.

The average salary of all actors is not more than $5000. But that is only when they start.

Some of them have to take up restaurant jobs in the evening which allows them to stay available throughout the day for more auditions.

There are plenty of actors who have become successful today after years of struggle. Some of them make 50 million dollars a year without working too hard.

The job of a construction manager is highly significant while making movies. Shooting for big-budget films will require big studio sound stages, a proper set of team workers who can build, carpenters, painters, riggers, plasterers, etc.

For this, you will need a construction manager, that one person who is responsible to the art director and can also work with the production and set designers and create some of the finest pieces of art on set.

The construction managers also need to have technical prowess which is needed to get a good job along with the management skills that will handle the budget.

A film also needs a good cinematographer top keep things going. When you see well looking and glamorous people on screen, always remember that it is the role of the cinematographer to make them look that stunning and beautiful.

The role of these guys is to translate the vision of these directors and write a story onto film or probably video. A cinematographer is also expected to have an artistic eye and some mastery over the technique of camera work and technology.

He is also the director of photography who handles pictures and manages the camera and lighting crews too.

Multimedia artists are also known as animators as they have been employed throughout the production and pre production process.

They are traditional artists and cartoonists who have been offered to sketch out a few ideas and to look different in a few characters and settings.

Sculptors may bring to create 3D models for the characters which have to scan for the animators. There are computer animators who are also virtual puppeteers who can bring emotion in the character and dialogue.

Talent agents are important! You should never underestimate the importance of one. These guys are responsible for finding scripts, actors, directors, clients and everything else that is needed for making movies.

Some also need to make sure that the clients book in the correct hotel rooms, have the right tickets, got their food right and have enough clothes and music when they arrive.

Crew members have to work behind the scenes to make sure the film is successful. They have to work as camera operators, sound mixers, set designers, etc.

They also have to handle the hair and makeup people, speak to the wardrobe consultants and manage the location manager as well.

This job is pretty easy to get than any other job in the world of entertainment. You need to have great skills to hire for this. There are also some skills which need training.

Costume designing is also a popular job in the film industry. If you have wanted to work in the entertainment world but don’t know how to write and act, here is something you can do if fashion interests you.

Costume designing is something that will help you get close to the stars. You have to handle their clothing, know what they need to wear and what sort of accessories they should be having depending on the scene.

Costume designing also a well paying job but not as highly paid as the rest. Some of the famous costume designers in this field have been Colleen Atwood and Sandy Powell.

Becoming a cameraman in Hollywood needs experience, talent, and education. You have to be able to fulfill instructions given to you by the directors.

Also, you should have a good idea of every scene about to shot. Some training need in videography too.

Other important skills include the need to communicate very clearly, listen to conversations and follow another person’s conceptual path. You don’t have to work every day but when shooting begins, they might have to work nonstop without a break.

You’ve to comply with the wishes of the director and also discuss if something cant be achieved. You also have to train and skill, only then it is possible to do the job the right way.

A celebrity hairdresser always needs in a film. Everyone has special needs for their hair and it is only the hairstylist who will know how to do this job the right way. If you want to do this job, you can surely get in without much effort.

However, you will have to work your way up before any of this happens. You will also have to study enough before you can become a professional.

Those who are experts get more paid than those who don’t. So make sure you know you want this.

Makeup artists also work in the world of entertainment and usually paid thirty one dollars per year. They make a lot of money as film sets expect them to stay as long as forty hours.

They’ve to ready with makeup all the time as they have to do touch ups for the actors and performers. They also have to be experts before doing such jobs.

There are plenty of beauty schools around the world that teach you how to get your makeup, hair, and attire done right.

So you will have to attend one before you can get into the entertainment industry. There are plenty of makeup professionals who have irregular work schedules. If you think you can handle all of it, then this job would be suitable for you.

The job of an art director is also quite time and energy-consuming although it does pay you very well. Your job duties include determining how to represent a concept visually and seeing how photographs and pieces of art can be used in the right way.

You have to be able to develop the style of publication, handle film sets, advertising for television too. It is also necessary to speak and present great designs to the clients and hopes to find approval.

Plus coordination of activities is also important. However, you have to be well trained and educated before you take up such jobs. A bachelor’s degree in any art subject counts.

A final career choice we can offer you is one of a lighting crew. You have to first establish lighting requirements, pilot the lighting, working as part of large crews, especially if you are going to work for big projects, checking the lighting and its focus during rehearsals, visit and assess different locations for technical purposes. If you can do all of these, the job is yours.

With this, we would like to bring the post to a close. Hopefully, you have found the right choice for yourself out of these sixteen flourishing careers.

The job of each one is important although the payment is different for all. You need to have a good idea of what you want before you can get the job you want. On that note, good luck.

And if you have some comments or feedback to give regarding the post, please feel free to let us know. We also want to answer your questions so write them down too.