The University of Minnesota’s Training and Development- Research Center, along with the Annenberg School of Communications in University of California, Los Angeles conducted an interesting research on office meetings. Their studies indicated that an average manager or executives working in a company spends around 50% of his weekly working hours at meetings. This study also indicated that most managers considered meetings to be very unproductive and in most cases they felt that issues discussed in these office meetings were irrelevant in nature. On any given day, there are around 17 million meetings in America and nine out of ten people attending a meeting, daydream in it. If you are a young enthusiastic executive who wants to look smart during meetings and create a good impression, here is how you do it. 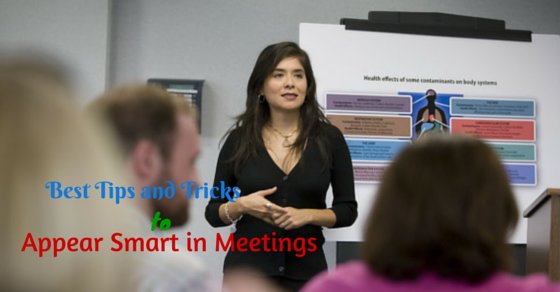 63% of American meetings fail as they do not have an organized agenda and people do not contribute much in these meetings. If you want to create a positive impression among your colleagues and make yourself look smart, you should ask relevant questions using a confident engaging tone. Your queries should be intelligent and when you ask them the tone should be low, so that everybody in the meeting stops and hears you out. Here you can modulate your voice well and speak clearly. It is important that when you speak, you clearly outline the analogy, which would indicate why you are speaking the relevant details and also signify its importance in the meeting.

2. Speak things on topics you are confident:

An average meeting just takes around eight seconds for a topic or an idea to be criticized. Thus it is very essential here that, you speak in areas where you are confident. If you make a mistake, it would be a good idea to accept it, without being too self conscious. If you get into a disagreement, the best strategy here would be to speak on points that you are confident on and never speak on subjects where you are not comfortable.

3. Step into the limelight by gently suggesting your colleagues to step back:

The University Of Arizona estimates that there are around three billion meetings held in America per year. The newsletter called the Facilitator undertook a survey which indicated that 25% times a meeting is successful when there is a facilitator for the meeting. After a couple of meetings you would realize that when a meeting begins, everybody attending the meeting would start speaking regarding their ideas and there would be confusion. The best thing to do in such a situation is, trying and stopping the noisy conversations by requesting your fellow members to take a step back. Most of your colleagues in the meetings would be surprised and taken aback. But this simple strategy would ensure that you are in the limelight for the next 60 minutes or till the meeting ends.

4. Look busy and attentive during a meeting:

Meetings are expensive affairs and annually, meetings cost a few million dollars for a medium sized company in America. Studies undertaken by MCI-Conferencing indicated that most people attending an office meeting do the following things. 91% of the people attending a meeting day dream, while 96% of the people just do not attend the meeting and 73% of people attend the meeting but also do some other work during this period. If you want to be different from your office crowd it would be best if you bring a small notebook and create an impression that you are taking important notes of the meeting. In case you are asked if you are keeping records, then you can mention that these notes are personal in nature. This simple statement made on your part would indicate that you do not mind doing extra work and also the fact that you are serious when you are in a meeting.

Every meeting has a main speaker. If an opportunity arises where the speaker is asked to repeat a specific analogy or a few sentences, you can immediately rise to the occasion and explain the analogy, using a low tone. You would be amazed that immediately you would become the center of the meeting and people would listen to you silently.

One of the easy tricks to make you look smart during regular meetings is by pacing around the meeting room. If you are asked to address a problem, you can walk around the room and create an impression that you are thinking hard and trying to solve the problem. This would make your colleagues wonder regarding what you are thinking and they would get tensed themselves. Another simple efficient method is to excuse yourself from the room stating that, you have an important phone call to make. Most people would not use this idea, as they would try to make the meeting look important. But you can be different and excuse yourself out of the room mentioning that you have to make an important client call to make. Your colleagues would thus be jealous and feel that you are an important person in the company.

7. Request the presenter to clarify something:

The National Statistics Council in a survey indicated that 37% of all employees in USA attended meetings regularly. Around 53% of the meeting agenda was covered well. But the remaining time was unproductive in nature. You can make this difference and create an impression that the entire meeting was very productive. One such way is to request the presenter to clarify something and ask him to go back to a specific slide. The moment you request this clarification, your other colleagues would try and understand the important fact that they have missed out in the presentation, which you have not. They would also curse themselves for missing this good opportunity to create a good impression for themselves, in the eyes of their superiors. You on the other hand can just sit back quietly and enjoy the importance you are getting in the meeting.

8. Crack a joke on yourself:

People love hearing other people cracking jokes on themselves. If you are ever asked a question for which you do not have an answer, the best thing to do here is crack a joke on yourself. When you do this they would love your honesty and also think that you are smart and quick to response.

9. Understanding the significance of being quiet:

In case you feel that there is nothing to be added in a meeting, you can just keep quiet. Being silent not only makes you look smart but it would create an impression that you are participating in the meeting and absorbing all the facts. Your colleagues would also get the impression that you are thinking or analyzing the situations and this would make you smarter than the rest.

It can be added that when practicing these above tricks you have to understand the fact, that all of them cannot be used in a single office meeting. In fact it would be a good idea to subtly try a few of them, and then see the reactions they evoke around you. Otherwise it could lead to a debacle which should be avoided at all cost.