Corporate life is filled with jargons borrowed from internet or from old english dictionary. They are generally the indirect way of commenting on the employees making it difficult to decipher them. But with time everyone comes to know the hidden meaning behind it. Many a times it could hurt the ego of an employee or could signal the bad performance or hinting some trouble to them. Below are 24 most popular jargons used in industry with their probable meanings. 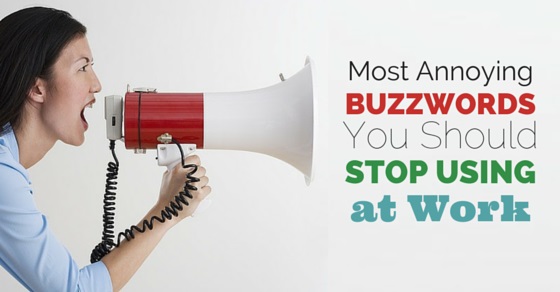 1. Out of the box thinking:

One of the most common office jargons used primarily by all the bosses around the world, without any specified meaning. This jargon is just a mere indication asking the employees to bring out innovative and breath taking ideas on the table. Explaining the current ideas or the solutions are not good enough please go and rework on the same.

An indirect way of saying this work is given to you on with an unreasonable deadline. No matter what, just keep working on it and finish it. Infact this line never specifically mention when will the day end, it could be evening when the office hours end or even before twelve in the night when the day actually ends.

Another popular jargon given by the internet world. A point where you need to talk to your boss or colleague, instead of saying you can come and talk to me whenever you are free or I am free, they use this jargon. This slightly tends to be confusing as it can mean talking through internet, email, phone or having a conversation in person.

We both see an opportunity to make profit and there’s no point competing each other. Let’s get together and try to share the benefits where no one lose. It is mostly used where the bosses or the seniors in the team expect their sub ordinates to do the work explaining them the alternative benefit they will be getting by doing all the hard work.

5. Will take this offline:

Technology has definitely given a new jargon for discussion. If an employee or an executive is trying to explain something and the boss might not like it or trying to ignore it in between the meeting or a discussion, it is an approach of saying we will discuss this later if you have a problem with this, this is not the right place.

6. No one says about elephant in the room:

A situation where people are aware about the problems and situations but are not ready to discuss or resolve it. Everyone tends to overlook the problem yet trying to achieve what is difficult to get.

These describe the easy targets to pressurise with work. For example, making an unpaid intern working the most without giving them the credit of their hard work. Or making the less paid employees work overtime without paying for it and taking the credit for their hard work.

8. Getting your ducks in a row:

Telling the person to be more and more organised. Many of the bosses in the world have the habit of picking on to their employees for one or the other reason, if they do not find an excuse then they try telling them to be more organised and efficient. It could be said even to arrange a bunch of papers on the table.

This is said when a boss says to find the solution of the problem even before the problem is identified. It is one of the nerve wrenching jargon where the boss tends to say about the incompetence of the employee indirectly, yet trying on the face that you are doing a great job.

To pace up when a work getting late. Whenever there is that last minute project the whole team is expected to leave their current work immediately and focus full energy to that one task which becomes a priority for everyone.

Telling to get to the root of the problem by putting more and more effort, dig deep and figure out why the problem is occurring. It is mentioned especially for those situations where a work is getting stuck due to some reason and the deliverables are not on time.

12. Looking under the bonnet:

Whenever there is the problem with the car, people look under the car trying to figure out the problem even if they don’t understand what exactly the mechanism is there in the car, or what could be the possible problem. A way of explaining even if you don’t know how this issue or the problem arises it is your duty to know and fix the problem.

Explaining to take measures and immediate step to grab that opportunity that you are not looking at or it could not occur again and again. A way to explain be attentive about the surroundings and the happenings and try to bring more and more business to the company whenever you can.

A creepy way of explaining to know the tightly held secrets which no one talking about. But everyone is aware of its presence. If these secrets are let out then there is a huge mess surrounding it.

A mathematical jargon to say be smart and do the impossible, prove it if you are better than others. Find the magical solutions of problem and work hard towards your goal.

Is your idea good enough to bring more business and profit to the company? When trying to convince your boss about your plan it is a way of saying that it has to be good enough generating reactions and enthusiasm among within the team.

An explanation to understand the problem that is not, let the work happen or creating the problem. Try getting into it one by one and try resolving it if in case the problem is there.

It is considered to be the powerful team within an organisation specially people on higher authorities who do nothing but trying to solve the problem within the companies and giving their best to an organisation. It is generally a comment on the authorities who might not be doing much work yet pretend as if they are the one saving the world.

Be it office or outside office, one can easily hear this one doing the rounds all around. Employees are given extremely tight deadlines with complex briefs and are expected to decode the brief achieving magical results in short span of time.

A concept which was actually explained by Thomas Kuhn describing the changing patterns of human evolution has become a common jargon used in companies. This term in offices are trying to explain or comment on the growth that each company is targeting to get at it and their employees begin a part of need to work more on the job.

With the increase in competition in the job scenario, companies are trying to push the limits to achieve higher targets. Sometimes these target could be unrealistic. These organizations tend to forget the concerns like health, peace and personal life. With the technological advancement and its commercialization, these terms are used on daily basis.

A common phrase where one tends to give an explanation to the boss where they might not have completed the work yet explaining them that it is in their head to finish it up. Thus jargon feels as an excuse for not able to finish the work within deadline.

A office jargon where the employer or the boss is trying to motivate the team to start with the project and let the whole team work on it. This jargon gets on the nerves of the employees since many a times a direction or a project guidelines are not shared by the boss.

Another common jargon used to imply for blaming other for their own mistakes and errors. It generally portrays a person’s selfish attitude where they do not prevent from blaming their own colleagues or someone else.

Try to learn these jargon before you enter the corporate world as it will save time for you to figure out the meanings and implementing or replying it to save yourself from getting into a messy situation. These code words will help you to overcome the verbal barriers in an organization.