Annoying co-workers are an inevitable part of every corporate office and no amount of silent praying every night to rid of these oddballs from your workplace can ever grant you freedom from them.

While some are loud-mouth, some are show-offs. There are yet others who can bully you to death.

The best way to deal with these weird personalities is to simply develop a coping mechanism that makes you oblivious of their infinite irritating ways of behavior. 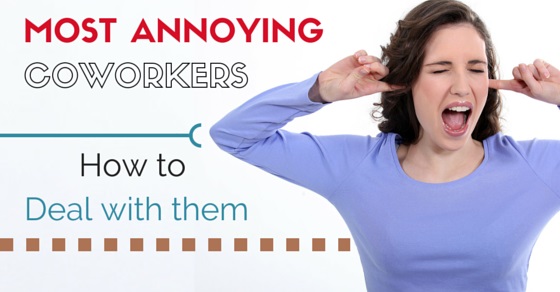 In case you are not the manager of the office or in the ultimate authoritarian position, you are bound to come across that senior co-worker who makes your life a living hell and makes you hate getting up for office every day.

The truly worst case scenario is that your boss himself is the bully!

Getting into fights with bullies when you were at school is drastically different than standing up to bullies at your workplace because while in the school you only get detention, in the latter case you stand to lose your job.

However, living in constant fear and frustration is not an option if you don’t want to get depressed by the day.

While you cannot directly get into a verbal fight with the bully (especially if he is your boss), you can always snap back with sarcastic or ironical comments in presence of your colleagues.

This gives the bully a message that you are not the one to back down and makes you a hero in the eyes of your co-workers. So win-win!

There will often be a guy who believes like he is the next Tom Cruise even though looks like Ben Stiller.

He is the flirt who never gives up despite girls turning him down every time. It is annoying when he plans to hit on the new girl intern and invites you to join him on his mission. It is almost like he has never heard of sexual harassment suits.

The worst reaction that you can give under such circumstances is to encourage such stunts further.

Encouragement or any form of support from his co-worker would just fuel his motives and lead him to carry out his despicable behavior further.

Self-made BFFs who decide to openly show their love for you in the middle of office hours can be detrimental to both your mental health as well as your work.

Whenever you look up from your desk, you find his/her face hanging inches above your head. You cannot get rid of that person no matter where you go, the restroom or the cafeteria.

The worst thing would be is that person’s love for you progresses into a budding crush. You will start receiving jokes (that aren’t that funny) via text or email at the dead of night, textual greetings every morning and not to mention the constant train of compliments every time you bump into them in the office.

While out and out rudeness is never a feasible option to handle such situations, you can always subtly start avoiding them and choose to only reply to their texts if its work related.

If gift wrapped packages start arriving at your desk, it’s time to consult your boss to put an end to it.

There is never a more annoying person than the one with a mouth which does not know when to shut up.

The person who lives and breathes gossip is one endless radio spewing out one gossip after the other.

There is no beginning or ending to his/her stories and once you fall into the trap of the gossiper, there is no stepping out to finish the important work that you had a deadline for. And there will always be infinite topics to gossip about like:

If you plan to sit around gossiping away about the innumerable topics involving your workplace and its people, there is a good chance that you will end up accomplishing nothing and getting fired in a month.

The announcer is a co-worker who does not mean to actually announce whatever he/she is saying but they inadvertently end up doing so.

In reality, whatever the announcer says sounds like, that person is announcing it to entire office because of the tone of his/her voice.

Maybe it’s really just a conversation with his/her spouse over whether he/she wants to order from the new Chinese place for dinner that night. But by the end of the conversation, you will have ended up memorizing his/her order for the takeout.

In fact the entire office would have done as well. The only way to deal with such loud-mouths is to simply be honest with that person.

If you have been working with the person for a long time, just go up to him and make him aware of the fact that he is talking louder than necessary and also in turn causing an embarrassment for himself.

There will always be someone who thinks that he/she is the best at everything and irritate the hell out of you.

If you say that you used to play baseball as a kid, the boaster would have you know immediately that he had played baseball on a state level.

If you know a joke, he knows ten; if you can sing, he is already in a band; if you are dating a pretty girl, he is married to a model!

There just no topping him or avoiding him. Moreover, to make things worse, he will have advice for every single situation that you bring up in front of him.

All of these advice being free of cost, it is constantly sprung on you on all possible occasions. All you can do in order to bear the ranting of the boaster is to just smile and nod your head and walk away the first opportunity you get.

It does not get any worse than the arrogant half wit that has newly joined the office solely because his dad owns the company you work for.

It does not matter what degrees he possesses, all that matters is the expensive tag that comes with him and which he did not have to work to achieve. Every glare or smirk that he flashes seems to scream, “My dad’s your boss, loser!”

You have to painstakingly watch him enter the office late in the afternoon and leave early in the evening just because no one will dare tell him.

He rarely socializes with people in the office because according to him all of them are “beneath” him.

Maybe he has joined the office a week ago but he will treat the oldest employee who has been slogging at the office for the last 30 years as trash.

While this superfluous demeanor of power maybe annoying, you cannot let it get intolerable. To make effective communication, try establishing a common ground like an interest that you both share. Use that topic as an ice breaker to have him warm up to you.