American history is filled with several examples of racial and sexual discrimination against women and minors who are ranging from voting new laws to admissions of hiring new policies.

To help others to rectify such historical inequalities that are suffered by both minorities and women, the president of America had come up with an executive order that will mandate those non-discriminatory policies that are associated with gender, religion, and race. 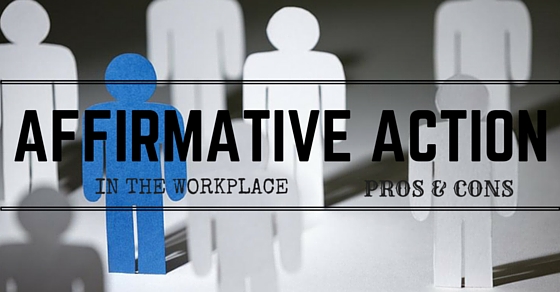 Several companies now have affirmative action as part of the business models but the practice is still controversial as it could create disadvantages and advantages both. And in this post, that is exactly what we are going to tell you.

What is Affirmative Action in the Workplace?

The affirmative action in the Workplace policies came into existence because of the civil rights movement that started back in the 1960s which were all put into place so that there can be equal opportunities for people everywhere.

To understand the effects of affirmative action in the Workplace policies, looking for the disadvantages and advantages can help.

What is Affirmative Action?

Affirmative action in the Workplace program or action plan is a tool of management designed to make sure there is an equal opportunity for employment for all. The whole idea of this action is that over time there shall be no discrimination whatsoever based on gender, race, ethnic profiles, etc.

The program consists of the diagnostic component which consists of several quantitative analyses that have been made to see the composition of the workforce of contractors and to compare them to the position of relevant labor pools.

What do they consist of?

Affirmative action in the Workplace program consists of action-oriented programs too. If minorities and women aren’t being employed at the rate which is expected given the availability of the labor pool, the affirmative action program of the contractor will include some steps which are needed to address and handle this underutilization.

What is an Effective Affirmative Action Program?

The effective affirmative action also includes internal reporting of systems as a method of measuring the progress of the contractor which is needed for achieving the workforce that could be expected in the absence of such discrimination.

The whole purpose of the program is to make sure there are equal opportunities for employment everywhere and that the contractors are committed to each other in every aspect of the process of employment.

Therefore as a section of the affirmative action in the Workplace program, the contractor must monitor as well as examine the decisions of the employment and the system of compensation so that they can evaluate the impact of such systems on minorities and women.

Affirmative action in the Workplace program is far more relevant than the exercise of paperwork. The program also includes practices, policies, procedures that the contractor shall implement to make sure that the applicants are given even opportunity and that the process of their selection and advancement is fast and easy. Given below are the affirmative action pros and cons list.

Pros or Advantages of Affirmative Action in the Workplace:

Here are some advantages of affirmative action in the workplace you should know about. Keep reading to find out how such a policy can benefit if you implement this policy at your workplace today itself. Read to know more

1. Gives more opportunity to others:

Famous scholar Randall Kennedy once said that the whole purpose of introducing affirmative action at your workplace is to make sure that people belonging to different races and backgrounds are capable of making use of the same opportunities given to them.

He also goes on to tell that affirmative action in the Workplace not just enables common people but also minorities and women to get hold of jobs and cater to their own needs.

Also, the scholar goes on to tell that affirmative action can be used best when you are interviewing someone who has disabilities. People from all walks of life shall be able to get hold of the job that way. An example can use to state this.

Affirmative actions may help women get an interview for jobs that they might not give otherwise based on their cultural assumptions like the one of a police officer or maybe a plumber.

Affirmative action in the Workplace also helps your workplace to become more intense and diversified. In that case, we are talking about not just racial diversity but also age, general and gender diversity that people experience from all walks of life.

Expert and sociologists have argued in the past that both cooperation and creativity in a workplace is vital as all employees must know how to become more proactive at work with folks who have different lifestyles and attitudes along with a different ethnic background as well.

Reskin also likes to believe that when a workplace is not all that diverse, employees will become more comfortable which can hurt the dedication of their job.

As a result of this, there has been a bigger and much wider field of applicants of single, white, heterosexual people for example. Though there is no doubt of qualified candidates in a gang of single, young and straight white men, the historian still likes to believe that the qualified candidates will expand exponentially whenever the company looks for other social groups.

One of the best benefits that come with affirmative action is that it will boost more productivity. This primarily because employees become aware of all the pool of applicants that ready to get hold of the job.

Along with that, productivity is something that will boost diversity since employees have to become creative when they are working with other co-workers from different social groups with those they have not worked with earlier.

Creativity can help people communicate better with each other and in that way, the execution also improves at the same time.

The good thing about affirmative action is that it can provide all kinds of businesses with a much better means of moral commitment. This means there shall be more justice and equal treatment for all people.

The biggest advantage of such moral stands at the workplace is not, however, direct. It may help employees share beliefs in the same principles of justice which can help you foster and more tolerate environment at work.

Not only that, but it also assures all employees who come from repressed groups that the organization shall consider them when the matter comes to promotions.

A final benefit you can derive out of affirmative action in the Workplace is that it protects you against hatred. The whole point of introducing this approach to the workplace is that those who do something wrong or commit a crime and offense on a person based on their gender or racial orientation shall be put behind bars or strict action shall take against them. This act guarantees safety to everyone everywhere. Hate crimes happen all the time and often they could be more violent.

Hate crimes are when someone attacks a minority based on the same sexual orientation. The crimes will be appalling but thankfully since we have affirmative action, nothing like this shall be noticed.

Cons or Disadvantages of Affirmative Action in the Workplace:

In this section, you are going to learn about the drawbacks and problems with affirmative action. Keep reading to find out what they are.

Even though affirmative action expects you to be well qualified for the spot, in some places not even the best and most qualified people make it to the list. This could lead to a bigger problem in case the person who deserves the spot doesn’t end up getting it.

In that sense, affirmative action in the Workplace will treat the majority groups a little unfairly because the policy as you can see gives preferential treatment towards minorities and other underrepresented classes presented historically.

Even though affirmative action efforts have been in place to stop and prevent racism, gender bias, as well as unfair discrimination, will create such situations for the majority of history.

Some people may refer to some action as another form of racism or even discrimination since the system has now gone to places where the historic majority in some separate class is because of gender and race. This could coerce employers to make decisions based on numbers.

It could also boost competition in the applicants who are qualified since employees do not get any direct postings towards women and minorities.

A big disadvantage that comes with affirmative action in the Workplace is that it will focus on the racial as well as gender issues instead of focusing on potential employers who capable of doing a good job in a position they giving.

Affirmative action in the Workplace is something that can draw attention to past issues of discrimination and racism. Even though the issues could exist in the business of today’s world, the action may not retract the injustices that have happened in the past.

The policies of affirmative action in the workplace policies may potentially create some kind of stigma that the women and minorities may obtain different positions in a company that is based on gender, ethnicity, gender and race instead of getting it through qualifications and achievements.

5. It could become condescending:

Affirmative action in the Workplace may provide special treatment and protection towards minorities. But ironically, this has also made several people feel like they really cannot succeed on their abilities and need some special aid just so that they can perform and do stuff that normal people usually do.

6. It will place low standards:

Finally, affirmative action in the Workplace is something that will place low standards for education and employment everywhere all over America which could be a horrible thing to consider since the world is constantly changing and life must change for people to keep growing.

Like every other approach, affirmative action has both its advantages and disadvantages. Even though it’s easy to cite them and give simple solutions to the problem, you must be very careful before implementing this approach at your workplace.

The whole plan and action are quite advantageous, to be honest, and could open up doors to a healthy and good environment but the disadvantages are also quite lethal. You have to keep that in mind as well.

Anyway, if you’ve liked reading the post and have some comments to give us, do let us know in the box below. We would love to help. Also, if you have queries and doubts you wish to be clarified, let us know about them too.Save