What is a Developing Country?

A developing country is a country which is less developed or in an underdeveloped stage. Some people also tag them as Third World Country.

A country with a relatively less developed industrial area or base and has less of Human Development Index (HDI).

The developed countries all around the world have far better growth rate compared to that of developing countries.

Apart from the other criterion, there are various universal and non-universal criterion that differentiate a developed and a developing country.

Within some nation, the belief is that the Gross Development Product per capita decides whether the country falls into the developing stage or not. 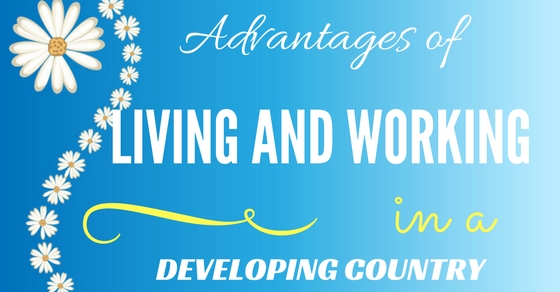 Some developing countries follow the traditional western model, however, some dislike being the follower of this tradition. Well, to sum up, the definition of a developed country, I would say,

“Any country with a low standard of living and industrial development compared to the developed country is known as a developing country“.

Why Live and Work in a Developing Country?

This question generally appears when you have to make a choice between working in a developing country and a developed country (in most cases people deciding between a career abroad).

When you have an opportunity at your hand of selecting between the two options, one would definitely want to opt for a developed country.

Why do they do so?

It is because a developed country gives more advantages and a better standard of living. However, do you know there are several reasons as to why you should work in a developing country?

1. An insight knowledge of all aspects of life:

Living in a country that is under the process of developing comes with certain beneficial things too. As a part of a developing country, it is normal to face aspects like social injustice, poverty, corruption, despair, etc.

This helps a person to develop his mental ability, empathy, awareness, and open-mindedness. Thus, psychological development is possible in this way.

2. A feeling of gratefulness engulfs your thinking:

In foreign countries, generally the developed ones, people run behind the sole motive of obtaining success. They run until the end of the time to strive for better. However, they are unable to be satisfied with what they are being served.

However, when you are a part of the working sector in the developing country, you are bound to feel luckier than the rest of the population of the same country.

As a result, you would develop a sense of gratefulness for life and whatever you have will satisfy you.

3. Easy fight for the top position:

Well, imagine that you are a person with good knowledge of your work and always strive for better than you might easily make your way towards the topmost position.

In a developing country, you constantly strive for better and yet feel satisfied with each completed goal.

When you have the experience of something harder than the easy stuff does not seem like that much of a problem. When you work in a developing country, you are bound to learn how to manage the complex things of the industry. Here is when you learn that the bookish knowledge of the university does not apply in your everyday work or workplace at all.

Advantages of Living in a Developing Country:

Experience is the sole of all kinds of skills and art. You can hardly ever master anything or any aspect of life without feeling every bit of it. You need to have practical knowledge of everything that you do. A newborn baby learns things faster and tries to develop with an exponential rate.

However, as we grow up we certainly get slower with our developing skills due to lack of adequate encounters. As a result, the development process slows down, so does experience. Of course, this is only possible if you are from another country.

In addition, developing countries have a lot of chance to gain experience due to the unavailability of luxurious items. You experience the traditional forms and stick to the natural way of living, which is very healthy.

Developed countries have busy people. They all have certain goals to achieve and the society expects each one to contribute a fair share to the country’s economy. Moreover, these countries have pubs, bars, clubs, etc as their socializing platform. Therefore, the strong community bonds are rarely found in these countries.

In developing countries, you do not need to be a part of the community. Living in the area makes you a part of the community right away. They are many communities in developing countries and this is because the socializing platform in these countries are their own homes. This gives them a better chance to interact with another. As a result, these communities have a huge network and they share a stronger social bond.

Thus, in times of need, you get innumerable hands for your moral as well as financial support. Support is one depression-fighting agent in tough times.

3. Lack of facilities and skilled labor:

To anyone, lack of skilled labor or facilities sounds like a disadvantage. Perhaps, it might be a disadvantage with a disguise of a beneficial aspect or maybe it is vice versa.

Imagine that you do not have a dishwasher. As a result, you are bound to wash all your dishes by yourself. Now let us imagine the next scene. You have a dishwasher that helps you do your dishes every day. However, today it felt like it wants to disobey and well, it broke down. Now, you would feel extremely lazy to do the dishes and the dirty dishes will pile in your basin. This scene gives you the feeling self-reliability and sufficiency.

The scene first tells you how good it is to be self-reliable and self-sufficient. Yes, it may take some of your valuable time, but at least it teaches you to be sufficient and less dependent.

4. Confidence and personality uplifting (without any personal development classes):

Well, I know this seems a little out of topic. How does confidence and personality uplifts because of being a part of the developing society. Of course, not even one out there runs a personality class free (They charge you good).

Well, let us get back to the point. If personality development were not through the free classes then how would you enhance your personality and confidence level? You can have a total personality change in a developing country because of the lack of proper security in the entire area.

5. Striving for better and the driving factor:

Developed countries have a firm economy that casts the profit blanket throughout the country. Due to this safe economy, there is a very less chance of recession or any other thing affecting the secure jobs of the people. However, it is not a similar case when it comes to the job position or the company’s value in the market.

The economy is unstable; as a result, it needs constant hard work to run it. Every single person that works in a developing country has a constant fear of losing the means of bread (income) if they did not work hard enough. This fear stops anyone from procrastinating work altogether. In addition, this fear drives each one to strive for better with their improved performance every day.

6. Expenses of developing countries will make you happy (when compared):

Do you know an average expense of per person in the developing countries?

Many people who earn their living in developed countries prefer keeping their families in their developing ‘home-country’. This makes it easier to save and afford most of the things.

Due to a large population in countries like China and India, the government strives to provide extra medical care through medical campaign and drives. As a result, you get extra care timely. This helps in detecting any potential disease from the early stage. Hence, prevention is possible.

Therefore, there are unlimited benefits here in front of you with a slight bit of discomfort latched onto them. However, after reading this, your views about staying in a developing country would surely change a bit (if not entirely).

Especially the savings is the major bonus you have while you stay in a developing country. There is a great list of countries that come under the developing tag, which you may find anywhere on Google.

Benefits of Working in a Developing Country:

Well, this might feel like I am over exaggerating but honestly the developing countries have a fair share of benefits coming their way. Apart from the benefits of living in a developing country, there are certain benefits in the corporate sector. Let us have a look at them-

Well, you must have learned this earlier that international trading markets have expanded a lot, into a huge overseas business, over the decade. These international markets have made way for the new companies of the developed countries into the developing sectors of the world. They not only create significant job vacancies for skilled people but also give the opportunity to increase the standard of the living of the people.

Moreover, this particular opportunity also helps people settle with their families within the place of employment. In addition to emotional support, this makes it possible to save significantly. In addition, the standard of living also increases with better opportunities.

2. Chance of expanding into a new market with certain facilities:

As a result, it not only improves the economic stability but also the standard of living via slowly improving the internal economic structure through small progress. Thus, developing countries can benefit many entrepreneurs too.

Medical students all around the world need a lot of training and internship before they become specialists in their fields. Performance and treatment under any situation is their major aim. In developed countries, the trainee’s study and practice.

Even experienced doctors opt to enhance their skills by working with an underdeveloped country. This gives scope for improvement as well as they can pass on their knowledge to join a humanitarian cause. This is an indirect help to both countries. Thus, developing and developed countries both have limitless advantages stored in them.