Doctors have a very important task, and that is, to save lives. Often Doctors are found risking their own life for their patients. To become a Doctor, in today’s world, is to take upon oneself, a huge amount of responsibility.

Doctors go through numerous years of expensive study, and practice to become proficient, in their profession. It is only fair for them, to earn a decent amount for all those years of struggle. In some countries, Doctors are paid exceptionally well. 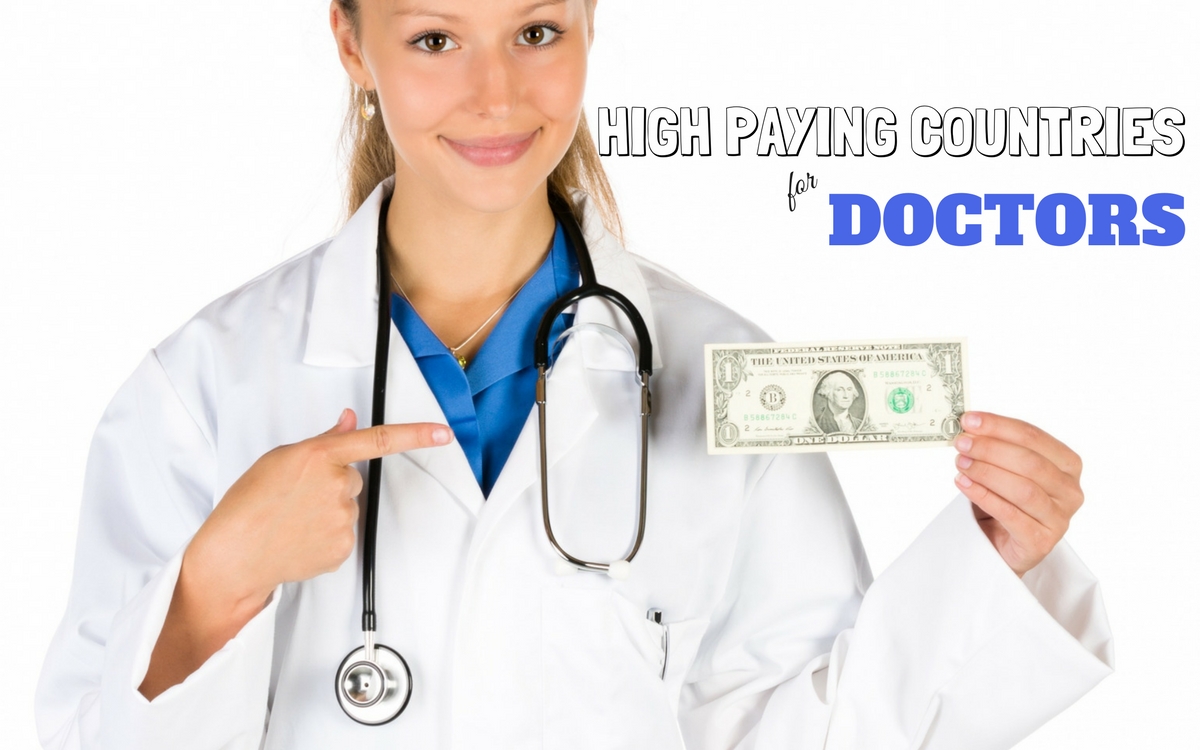 A general practitioner, also called GP or generalist, is one who does not specialize in one particular area of medicine. They provide routine health care. They often have regular and long term patients. They cater to both male and female patients, in all age groups. When a patient develops a serious condition, the general practitioner may refer a patient to a specialist.

Medical specialists are doctors who have completed advanced education and clinical training, in a specific area of medicine. Examples of specialists are cardiologists, dermatologist, gynecologists, etc.

Netherlands is equal to living in paradise for a Doctor. It is like a dream workplace. They offer to pay high salaries. They have great working conditions, shorter work hours and to top it all, they have plenty of holidays.

The “island continent” is the second-highest country, to be paying its Doctors extremely well. Doctors from the UK move to Australia, due to better conditions. Also, there are many reasons for working in Australia.

Better working conditions and an advanced support system is offered. Teaching and education are given the utmost importance. Doctors learn on the call and work side by side.

Everyone here focuses on learning new techniques and sharing information with others. Hence Australian staffing levels, result in being higher, than other countries. Specialists make roughly $247,000 and general practitioners make approximately $91,000.

Many believe that the USA pays the most to its Doctors. However, the USA is on the number three position. A specialist in the USA makes around $230,000 annually, whereas a general practitioner goes home with a $161,000 roughly.

A significant dearth of doctors is predicted in the next 15 years. This is due to the higher practice cost, and lower insurance reimbursement rate.

This country with beautiful cities and medieval towns doesn’t look all that great to doctors. Here doctors work the longest hours, more than any country in Europe. An average of 51 hours per week has been recorded.

The taxes here are sky-high, making it all the more difficult to prosper. Specialists here make approximately $188,000 annually, while GP`s take home an unimpressive $61,000.

Canada faces a lot of difficulties, due to its doctors finding their way to the USA for better conditions. The USA provides higher wages, as compared to Canada. Canada faces a shortage of doctors due to this.

Hence doctors in Canada are faced with a huge number of patients, and patients, in turn, have to wait for long hours. This strains the doctor and patients relations and in turn, results in poor work quality. Specialists earn approximately $161,000 annually, whereas general practitioners earn $107,000 annually roughly.

Even though UK doctors flock to Australia to work, they make a salary worth sticking around for. Sadly, doctors in the UK, are often overworked and understaffed in hospitals. Specialists here make a salary of $150,000 annually, whereas general practitioners make $118,000 roughly.

With Brexit, the medical profession, just like other sectors in the country, faces uncertainties which need to be sorted out. However, the UK is among the countries that offer great financial aid to its medical students. That is definitely good news, for students who wish to take up medicine.

France definitely could be the perfect place to live in. With its beautiful cities, the sweet dialect, this could be a perfect haven for doctors. In addition to their love for art, croissants, wine and Paris, France pays its doctors really well.

In France, there is a pharmacy in almost every corner of the street. Specialists here earn approximately an average of $149,000 and GP`s roughly earn $92,000 annually. France is a place to enjoy the finer things, of life, and definitely thumbs up for doctors living there.

The North Atlantic Island stands at eighth position, in the list of highest pay for doctors. In Ireland, Specialists earn an average of $143,000, whereas general practitioners earn approximately $90,000 annually. Here the pay isn’t much higher than in other countries, here the specialists conduct private and public work.

Based on the type and level of specialist, doctors could charge, $200 – $300 or more for 15 – 20-minute consultation. Hence the total amount of money, that they earn, is higher than the average amount of $143,000. Hence if one is an English speaking Doctor, and doesn’t mind about the weather, he could make a move to Ireland.

The mountainous Central European country, with numerous lakes, villages is also home to the high Alpine peaks. Its neutral country consistency makes Switzerland, one of the best places to live in. Switzerland caters to a high quality of life.

New Zealand is a country of the south-western Pacific Ocean. It consists of two islands, both marked by volcanoes and glaciations. The Specialists in New Zealand are paid $86,000 on an average annually. The general practitioners make around $78,000 annually.

Germany is a western European country. It has forests, rivers, mountain ranges and the North Sea beaches. It also spells of 2 millennia of History. In Germany, specialists are paid $77,000 whereas general practitioners go home with approximately $69,000. Starting salary currently lays around $49,000 annually.

Assistant Doctors in Germany are the job starters, with the highest salary accounting to $68,000 annually. This amount can further increase, with the help of professional development. As an assistant doctor, one learns the diagnostics and methods of his specialty. He treats patients independently, as well as under the supervision of the senior.

It is a Scandinavian country, encompassing Glaciers, Mountains and coastal fjords. Norway is a socialist country where there are a number of taxes to be paid. Here a Doctor can expect to earn a decent amount, nothing that fancies though. Specialists make around $77,000 while general practitioners earn approximately $66,000.

Sweden is a Scandinavian country with thousands of coastal islands and inland lakes. Specialists in this country earn around $76,000. General practitioners take home approximately $66,000.

Though Arkansas is a place where the pay of a doctor is based on the sex like female medical practitioners get less paid than male ones, the average pay of the doctors are quite handsome and they consider themselves rich for being a doctor by profession in Arkansas.

In this place, the female doctors are found to be spending more time on each patient than the male colleagues and so they draw less than them. The salary ranges from $211,432 to $270,000 on an average for this profession.

After graduating the doctors here in South Dakota undergo specialist training for various streams in the medical field. The basic salary of this profession in South Dakota ranges from $189,000 annually on average. There are also specialists like orthopedic surgeons who earn a remarkable salary of $519,000 annually. The trick here to earn more in this profession is to get a specialization done.

After completion of the residential part in the medical field, doctors in Iowa have the scope to go for specialty training or they may also opt to go right to work after completion. The pediatricians, general surgeons, anesthesiologists, an obstetrician or gynecologists have varied starting salaries on average.

The average salary of a doctor in Iowa ranges from $305,000 annually on an average that tends to differ a lot with the possession of specialty. While a family practice physician earns up to $110,462 and Internal Medicine physician earns $232,493.

Specialists all over the world have great opportunities in comparison to general stream doctors. Same is the condition with Idaho where they manage to gather good pay which makes them highly attracted to shift to this place for their better career prospect.

Moreover, the other surrounding aspects like the standard of living, less tax burden and reasonable prices for all supportive items make the doctors count themselves lucky among different professionals all over the world. Though the salary $187,411 annually seems less yet the living conditions make the place a happy one for doctors all over the world.

You have joined the best ever career in the whole world, this you would feel when you are a doctor in Wyoming. The salary details collected from around 127 data points mark that an average compensation of $124,908 is drawn by a medical practitioner annually.

The standards of living in Wyoming, state income tax-free and high demand of the doctors result to the hike in the salary range of these professionals in Wyoming.

It is though 11% below the national level of income, the doctors in Tennessee are quite happy with their average annual pay of around $137,378 which is quite a hefty sum in the world of doctors. In respect to salaries, the rise in the demand of Physician assistants is also very high in a medical career.

Choice of cities and geographies, no state income tax, fewer malpractice lawsuits and excellent medical community add up to a very suitable platform for the doctors to select it as a profession. The average salary that a physician draws in Texas amounts to $175,929 which you can always count upon. With the years of experience and specialization, doctors get their pay hiked in a very short span in Texas.

As per  Physician CoMedscape’smpensation Report for 2017, the salaries of doctors differ drastically as it depends on their specialty and the location where they practice.

Some of the other reasons for salary differentiation is liability insurance policies and the number of other doctors practicing in the same area.

Let us now look into some Highest-paying states for doctors

Lowest Paid Doctors in the World:

Following is the list of states where the doctors are paid very less. Some of the lowest-paying states for doctors are.

Countries Where Doctors Are Needed Today:

Be it a metropolitan city or any rural village, the demand for medical staff will always be high. Moreover, most of the doctors prefer working in cities rather any rural areas. That is the reason, many of the rural villages face the problem of scarcity of doctors.

Let us go through the list of countries which are facing the scarcity of doctors.

It is very difficult to lead the life of a Doctor. However looking at some of these first-rate salaries, in some of the best countries to live in, the Doctor might just find his perfect life and more and more candidates might opt for a medical career in the coming years.