This question probably does not need an answer. The existence of the newspaper is not at all a secret to anyone

The invention of the newspaper started during the ruling period of the kings.

The objective of these newspapers was to bring forward the latest news from the north, east, west, and south of the kingdom.

However, variations and modifications are the keys to survival in the living world.

The newspaper that we see today is a result of the variations and modifications over the years.

A newspaper is of great importance to the business sector. It is a mode, which the companies use to issue job vacancy advertisements.

Here are some of the disadvantages and advantages of advertising in a newspaper that are discussed below. 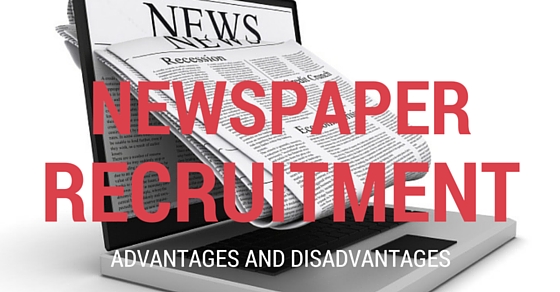 What is a Newspaper?

A newspaper is a term formed within the boundary of four criteria. The criteria are accessibility, periodicity, universality, and update.

It’s an accessible source for the majority of the people. It is published on a daily note, which makes it possible to acquire information at a regular interval.

It covers various niches, which marks the flexibility of the newspaper. Lastly, it reflects up-to-date stats of the world.

Newspapers not only covers the news of the business world but also becomes a platform to provide advertisements.

Recruitment refers to the function of Human Resource Management, which includes advertising, selecting and assigning a suitable candidate for the company.

The process of recruitment and selection process is further divided into 3 steps.

Job description analysis is the initial stage of recruitment. Here, the HR manager analysis the skills and knowledge that is required for the job.

Each job description differs according to the position. Some companies prefer an experienced candidate and some give opportunities to the beginners.

Hence, the job requirement list is formed during the process.

Compared to the olden times, advertising a job vacancy is a relatively easier job.

3. The final stage (Selecting and assigning):

The final stage of the recruitment process includes two steps i.e. the interview and the selection.

Various candidates apply for the job depending upon the qualifications and the requirements. These candidates receive a confirmation call or mail for the interview by the HR management.

The recruitment staff conducts interviews. Later, depending upon the interview results and observation the deserving candidate receives the job.

Although the above steps seem like an easy process, it is indeed the opposite. The recruiting staff and HR management need to consider various factors before recruiting.

Once the description analysis is completed, the biggest question that arises is which model is suitable for the company to use for advertising.

Recruiting strategies is a very important process in any firm. Thus, most organizations with a big budget may contact agencies to do the work.

These recruiting agencies advertise the vacancy effectively. They may post it online or through written forms like local newspapers and national newspapers.

This is a largely used format of job vacancy posting in recent times. It makes it easier for people to reach.

Moreover, due to the e-development, it has become possible to approach comparatively more candidates in lesser time and budget.

Besides, various sites have developed in recent years that allow job seekers to apply. This mode of advertising is an ideal deal as long as the approach is for an international or multinational firm.

Newspaper vacancy advertisements are the oldest form of advertising. Like the online format, the newspaper is efficient over a large area.

However, it is also equally effective in the local area. Local newspapers are distributed in the locality and are read by almost everyone. They are flexible and cover many niches.

However, we are subjective to our choices. Let us have a look at the advantages of newspaper recruitment.

Advantages and Disadvantages of Newspaper Recruitment:

With the advent of technology, organizations and firms count the newspaper recruitment stage as obsolete.

However, there are certain advantages of newspaper recruitment that you cannot neglect.

Local newspapers are the papers that cover the news of the international level. However, the people of the same geographical region read the news. Certain jobs require experience and knowledge of the locality.

For example, the job of the tour guide. Tour guides require the knowledge of the locality.

Thus, the people of the same region with the required qualifications are the target. The job of the salesman also requires the knowledge of the people in the locality. These are some of the advantages of local newspaper advertising.

Therefore, placing the advertisement in the local newspaper serves as a profitable and efficient deal.

Is your budget limited?

Well, the newspaper is a budget friendly model. It is flexible for use. Depending upon the budget you can vary the size of the advertisement. Mentioning a few lines is more than enough to place the ad.

However, if the budget permits you can go for an ad with a picture relating to the firm.

Alternatively, you may place the ads under topics like sports, comics, classified, etc. This increases the possibilities of more attraction from job seekers.

As the odds of qualified candidates increase, there are more options for the interviewer to select a deserving job seeker.

Why do you think that the invention of the laptop was possible?

Well, wireless technology is a solution to the dozens of wire connections and its trouble.

Nevertheless, how is that possible?

As I said earlier, comfort and convenience walk together. You can access a newspaper at any time and anywhere. Unlike online jobs that require tools like PCs, laptops or mobile phones, newspapers are convenient.

What do you mean by the 80s below?

By that, you mean the people of the 1980s and below. In today’s time, the ones who are not used to technology read the newspaper.

If the targets of your ad are these people then the newspaper is the perfect way to approach them. This will work effectively for everyone.

Well, you saw an ad on a site then you switched on to a different site.

Then you moved to another site. During switching from site to site, you saw various ads.

However, there are already too many bookmarks saved on your computer. Forget about those ads now. Well, a newspaper is a solution to the complication.

A newspaper avails the reader to cut out the ad or mark it, to sort out the vacancies. It is efficient and comfortable for the seekers.

Approach and reach matters a lot in business firms. However, one more factor needs your consideration in the process i.e. time.

If the ad that you have posted has a time condition or is a limited period vacancy then you receive more application.

People receive newspapers on a daily or weekly basis, thus, the job seekers reciprocate as soon as they read the post. Therefore, it saves a good amount of time.

Therefore, job vacancy advertisement in a newspaper is not as bad as it seems. However, nothing is limited to advantages only. A few disadvantages of advertising come along with the idea of newspaper recruitment as well.

Did you read a newspaper this morning or yesterday morning?

You have not read the newspaper at all in the last few days. Well, it is a very common scene with most of the population today.

As a fact, it is not a surprising thing either. With technology, newspapers have also opted for an upgrade as so have we. People who want to know the news may switch to various sites for e-news.

Similarly, most of the corporate world matters handle online thus, many websites have developed that offer a platform to post an ad as well as apply for a job. Thus, the newspaper falls short in this area.

2. The scope of applicants:

The scope of any medium limit unless you target more than one source for the required job.

Similarly, newspaper limits are effectiveness over a certain geographical area. Moreover, you cannot post ads in various cities in the country. It is impractical and costs a lot.

For example, if you place an ad in ‘The Nashik Times‘ then the people of Nashik will only view it. Thus, the response of the applicants will be limited to Nashik only. Therefore, a newspaper fails to be effective over a larger area.

The newspaper is, after all, a paper. The lifespan of the paper depends upon the user. Job seekers usually read a newspaper once and then discard it.

Moreover, the ads in the newspaper usually have a limited period vacancy.

If an applicant views an ad after a day or more then there is comparatively less chance of the diverse response from the job seekers.

Moreover, it is not a profitable deal for the organization as well. A newspaper has various ads, thus, it a difficult task to ensure that the targeted audiences have referred to the ad.

Also, if a person spends a few minutes to read the entire newspaper it means that the person barely gave a glance at the ad.

4. The period before publishing:

What do you do when you like a book at the bookstore?

Well, you buy it to read later. However, the journey of that book did not start from the bookstore. It started as a rough draft, which was modified and polished. Later the author sends it to the publisher and so on.

Similarly, an ad reaches the readers as soon as it published. However, the stages before publishing are time consuming.

Moreover, if the advertisement publishes in a weekly publication then it will take relatively more time for the job seekers to view.

5. Do you need a magnifying glass?

The other day a five-year-old child was using his fingers to enlarge his mini nursery rhyme book.

Well, I am not highlighting how technology has affected him. The child may be doing so out of habit however, you may too wish for something like that when you see the tiny script of the newspaper.

Mobiles and cameras have the feature to zoom the texts whereas the newspaper does not. A tiny script may be very irritating to read.

Thus, it decreases the odds of applicants viewing the ad. Moreover, on the part of the applicant, it is a sheer loss of opportunity.

The newspaper has been a significant mode or source of various news and ads in the late 19th and 20th Centuries. However, at the beginning of 21st Century digitization started ruling the globe.

The youth have chucked the use of the traditional form of job searching source and have switched to an advanced mode. The e-recruiting system has rooted itself into the core of the corporate world.

However, you cannot ignore or neglect the newspaper recruitment method. The choice is subjective and is based on the analysis of the requirements of the organization.