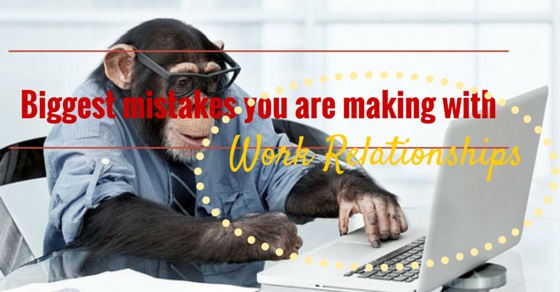 1. Using the office hours solving out own personal stuff:

With this statement it means that while working in the office it is better to keep your personal problems out of the reach. As simple as that during working hours, work should not be distracted. Everything should be attended at its own time.

People become aggressive while working because they cannot control their emotions. Basically they are emotionally imbalanced. They are either frustrated from the home problems or with the work and when they fail to concentrate on the work they become aggressive and this can be bad for the employees reputation.

Many a times there are such situations when the employee does not want to work or is not able to understand about what the project is about. In such cases the employee makes the biggest mistake of saying yes on the first place in order to impress the boss but later on making excuses when the work is delayed. Well in situations like these it is better to say no directly as it can save both the side.

4. Using the company resources for own entertainment purpose:

5. Taking a gap-nap after short intervals:

Every organisation or company does give a break to relax and eat, but there are some who take a gap after every short interval. This action can put a bad impression of the employee in the office. Such employees are lazy workers and they try to avoid the work as best they can do. This can be very harmful for their workplace relations.

Mostly the employees who cannot work by themselves, to cover up they blame the office working style. Blaming the company’s policies or work culture is another biggest mistake made at the workplaces. Being not able to complete the work instead of asking for help, in aggression they start complaining. This is bad.

Many have this habit of jumping into the matters or issues of others at the workplace. They jump in to rescue but turn out to be the one’s spreading the fire. This grabs the attention of others on that one “saviour” and once again his image goes down.

8. Discussing the problems with the HR:

To be clear on the first point, the HR of the company is the one person who is there only to listen to the problems but not to go against the policies of the company. He is not a bosom buddy to whom every secret can be told. This is another mistake in which the employee straight away goes to the HR to complain and he himself creates a workplace relationship problem.

9. Not accepting the mistake:

When someone does not admit the mistake then it becomes a reason of break in the work relationships. Even after knowing, refusing to accept the blunder, results into a fierce rage among the other employees at the work. Nobody likes to talk to such a person.

10. Putting the blame on others:

Even after knowing who the culprit is, pointing out on the other person to sail to the safer side is the biggest and ridiculous mistake. This is not a mistake rather it is a crime. Generally these actions are taken to cover up for themselves because they do not have the courage to face the consequences’.

Failing to impress the manager by showing no confidence, becoming nervous at every word, not being able to keep yourself in front of the boss is another workplace problem and can lead to poor work relationships. At a workplace everybody hates dealing with the person who has no courage to talk or is shy. The companies are a place where everyone has to work professionally.

12. Mingling around too much:

No matter how much potential one has in working but if you look bad then you fail to maintain good work relations. This is so much true that there always needs to be a professional image so that one could work without any hesitation. If only the same is not maintained then nobody would like to work with you.

Failing to express is one problem and displaying the negative emotions is another. This means when someone is explaining something and not paying attention to it, also it means when being told about the mistakes and failing in controlling your own emotions and it also means becoming rude at the workplace due to own personal problems. Not participating actively in the office is again displaying of negative emotions.

15. Failing to represent the company:

Hammering over the wrong things is all vain. Now if something has been proved wrong then arguing over it would the dumbest thing. Instead of making the problem a solution, working on another idea without any further discussion is better. Fighting over one issue will create more quarrels and will only result to image showdown.

All the above points tell us about the types of mistakes committed and these mistakes can even lead to losing the job or any other consequences like bad reputation or not getting a job in any other organisation and many more. But if there are problems then there are the solutions too. So to build a positive relationship in an organisation the following can be done:

How to Build Effective Work Relationships?

1. Being good to everyone:

Be polite, for the soft spoken words can win many hearts. As mentioned earlier not to speak too much at the workplace, it is best to speak less and softly. Encouraging the co workers and being friendly to them can be a point towards a good relationship at work.

Everyone should be this much brave to face own mistakes and take the responsibility of making it right. Also if any work is given, it should be done with great attention and with cool mind. The employee should be responsible of his own things.

3. Do not create inconvenience for others:

It is very necessary that while working in the office one should not create problems to others. A healthy and working environment should be maintained while in the office. Because you have to share the office so feel and be happy working with others and do not create fuss.

4. Do not participate in office gossip:

If one wants to avoid the mistakes at the workplace then the best thing is to stay away from the office gossips. Automatically a good working environment is created.

5. Learn from the good qualities of others:

A workplace is full of many types of people, in other words if there are bad people then there are some good too. The incomparable thing would be to learn something better and good from the good people there. The one who is a good learner is a great person.

6. In case of the mistake, make it right:

It is always said that the mistakes cannot be committed if avoided, well that is just not so true because sometimes even avoiding can be a mistake. In any case if such a situation occurs then to handle the position it is good to accept the mistake and think about the solutions to correct it on the second place. In times like this when telling the manager it is also good to present a solution to the boss on the same time.

The greatest solution to avoid the workplace mistakes is to communicate with the people, not about the personal stuff but about the office work like discussion regarding the work related problems, the solutions. By following the above points you can surely avoid mistakes at work place. Best of luck.