The interview is the process by which the most efficient one’s get selected. Those efficient ones are not always the toppers, but the smart people as well. Doing hard work is good but along with it, working smart is the need of an hour. Many a times, this problem arises where the candidates are capable enough of being selected, but the situation goes upside down just due to a few errors in the way of using words. No matter how good you are, you will have to maintain a limit while speaking during an interview. There are some of the words that describe you in a wrong way that you should not be spoken while you are giving an interview. These are as follows: 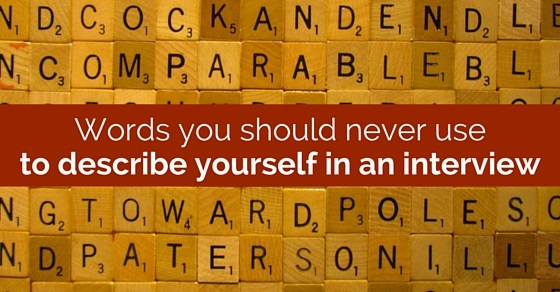 Words You Should Never Use:

The following mentioned are few tips to answer “how would you describe yourself” or “tell us about yourself” interview question.

1. Being self-obsessed is bad:

Sometimes being self-obsessed is good, especially then when there is no one to applaud you for good performance, and then one can give himself or herself a belief that you are good, but not at any interview. When giving an interview, do not utter lot of ‘I’ in your sentences, like “I have done this”, “I have achieved this” and all. Just be humble about what you have done and be down to earth, no matter how experienced you already are.

Every individual is intelligent in some or the other manner. Even every company demands intelligent persons to work for them, but remember not to recite that you are very intelligent again and again. Just say that yes you have experienced it during the previous job so you have a little idea about it. But do not directly say yes, “I know it because I am intelligent enough”, many of them do this to showcase their caliber but it is entirely wrong.

Being kind and generous is too good, but repeating one thing over and over again is not acceptable. It will show that you just know how to sing your own praises and may present you like an empty vessel which makes much noise during the interview session. So, this is also one of the words that can cost you a lot in terms of a good job.

4. Anything which bad mouths the organization should be avoided:

Praising yourself on certain things or the qualities is at times good and to some extent nodded, too by the expert panel, but mind it, bad mouthing anything be it an organization or a person will also put a bad impression. So, never ever do that. It is all against the organization’s will as well as against the will of the analyzers.

Every single individual has some or the other sort of fear at some or the other point of time. Be it a fear of passing off the cockroach, or a fear of giving a presentation to the staff. Everyone possesses it somewhere in the corner of the heart. During an interview,never say that you are fearless. You may use the word brave to take up all kinds of challenges, but do not mention the word fearless as it may put a negative impact and you will be depicted as an over-confident person.

You may have done something successfully but saying that you are successful is completely wrong. Never say that, just say that you were assigned the task and you happened to successfully complete it within the deadline provided.

Some of the fields require creativity, so if you are aware of the type of job you are going to give interview for, you should be careful in using such words. Again for this word, you need to show the number of creative ads you made, a number of creative copy writing you did and so on, in the context to your job. Show the things which you have done in a creative manner to them and only then the interview may go successful. Because, making use of the words is quiet easy and affordable even for a poor being.

No,no,no.This word comes in the family of negativity. You can replace it with a word humorous, that would be much better in projecting yourself. Say you have a great sense of humor, but do not ever say you are funny, as obviously you are not a joker who is required by an organization. So, do not even utter that you are funny, because no one ever is.

Are you a badminton player, or a number one gadget with a high tech advanced features, not at all, yea, so don’t say you are world class. Just say you are good at doing this or that, but say a big no to the word world class while you are giving an interview. It won’t do good to you. It will only express the lack of knowledge in you, deficiency of communicating skills, Grammarly issues and what not. There can be any number of shortcomings or wrong words be taken into the notice by them, so do not give them a chance to do the same. Be focussed on what you are saying and also be alert while making use of the words in front of the expert panel.

You will yourself invite fears and problems for yourself by making use of this word. Adaptable, yes, you may be but adjustment is the right word. Say you are flexible enough to adapt to any new environment. This word is something positive and gives a sense of positivity to the one’s taking your interview. You may adjust in any kind of situation be it good or bad, as sometimes worse conditions may also arise, you never know, no matter how big or renowned the company is, so just say that you are always happy in adjusting to the new safe environment.

It is one of the most used buzzword in the corporate world. There are many dynamic organizations who chose dynamic workers who sweated through awkward interviews to give the dynamic results. But its good if you are not dynamic, because this is not the exact word to describe your dynamism. Be an all-rounder not dynamic person. You are not a grenade, which will explode, you are a simple human being, so be that only.

Being friendly is fine with the experts. Yes, you may be excited for an interview and job, but do not forget of not making use of the word bubbly. It can sound ditzy to them. So bubbly is not at all good option. Just mention you are very friendly, helpful and so on, but being over friendly during an interview can mark a red signal for your selection.

So, above are some of the words which are unknowingly used by many of us during the interviews which eventually lands us in troubles like losing the good job opportunities and so on. If you know no particular word, its meaning or its usage, do not make use of it. Making use of wrong words, not only gives the wrong impression but can leave you perplexed if counter questions are asked. Do not yourself crawl in the trouble pit, just try and cross from it and you will pass safely from there.