Learning web designing is very easy and it can be fun in many ways. Moreover, web designing can have many opportunities in store.

The main challenge for any web designer is learning web designer interview questions, succeeding in company placements and getting a job.

If that individual can pass the web design interview then there is no stopping for the individual to be a Web Design Expert. 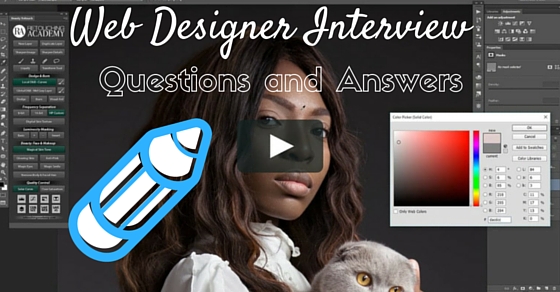 Web designing is a creative, engaging and innovative job. The most important part is having that creative curve mindset, that helps you do your job well.

The difficulty which arises is at the time of getting an entry in a reputed company. The basic process is the interview in which you will be asked a question relating to your niche and the best way to get through it is nothing but proper research and good preparation.

As a step for preparation, having a good look at all the common interview questions for web designing will help you.

What is Web Design?

Web design can be defined as a process in which a web layout is imagined, planned and finally created in the form of electronic files that help to direct the proper color, fonts, images and graphics together in an interactive yet attractive web format.

The following mentioned are a few tips on how to interview a web designer by using and asking these interview questions.

1. What is a CSS file? For what purpose it is used?

Ans: CSS is called “cascading style sheets”. It is mainly used to open and control web pages. It is usually used for controlling web pages which include font sizes, font styles and color combinations that are necessary for the webpage. CSS files make changes globally as any change in a CSS file can also lead to an overall change in the website appearance. This means that any change in a certain CSS file can cause automatic changes to the pages that use that certain CSS file and will display the changes.

Ans: No, CSS is not case sensitive. CSS is case insensitive under most of its control except for document mark-up language which is beyond its control.

3. What is the external style sheet? How can we link it?

Ans: External stylesheet is a template/document/file which contains style and appearance information which can be used to link the HTML document and a large number of HTML documents can be linked using external style sheets. The file document can be linked using the LINK tag under the HEAD element. Files containing style information should have a suitable extension. For example, style.css. The proper syntax for linking the file using external style sheet is <head><link rel =stylesheet href=”style.css” type=”text/css”></head>

4. How do I make a webpage that someone can simply just send me a mail by just clicking on text with the subject?

Ans: We can apply this by using mailto command in an AHREF link tag given below:

5. How to align pictures so that they are one above the other?

Ans: By using the align statement in the IMG SRC tag.

6. What are the possible values for “position”?

Ans: The type of positioning used for the webpages can be determined by using the “position” element. These include static, relative, fixed, inherit and absolute.

7. What are the different JavaScript types?

Ans: There are six types of JavaScript: Object, null, string, undefined, Boolean and number. Objects include functions, array and ordinary objects. Numbers may include integers and real numbers, and also include special values such as NaN and infinity. Strings include empty strings, ““,

8. What is called as negative infinity in JavaScript?

Ans: It is a number in JavaScript which is formed by dividing a negative number by zero. The number will return undefined if used by negative infinity. Example: number.negative_infinity.

9. What does the NaN function do?

Ans: Return ‘true’ if the argument is not a number.

Ans: Since the question contains strings and + sign is usually used for catenation, the answer returned will be 124.

11. How do you convert numbers between different bases in JavaScript?

Ans: A prompt box is a popup box that allows the user to enter the required inputs. This is done by providing a text box. The prompt box can also have the OK and the cancel button to proceed with the input entered to execute the action.

13. What is the basic difference between an alert box and a confirm box?

Ans: An alert box is a popup box that has only one element. That is the OK button. While the confirm box has two buttons the OK and the cancel button.

14. What is the work area in Photoshop?

Ans: The Photoshop work area has many features:

This is where the user can select most of the functions and commands and features in Photoshop.

This is the area where the image to be worked upon appears in Photoshop.

Shows a wide array of different tools. This contains specific features that can change the tools used. This changes the properties of tools as each option is selected.

Tools for creating different images can be selected from this function. This is a toolbox for the different tools available.

To modify and manage different images available. There are five variations of palettes available in Photoshop.

Used to organize different palettes while working or doing a project.

15. What is the difference between HTML5 and HTML?

Ans: HTML5 is the newer version of the basic HTML that includes various other properties such as placeholder, video and audio modifications, canvas, 2d and 3d images, date select function and also an added local SQL database. This also enables the webpage to reduce the use of external plugins such as Flash players or any other libraries.

Ans: The <!doctype> is an element used to indicate what type and version of HTML are been used. <!doctype> is usually initialised under the <html> tag. This also does not have an end element and is not case sensitive. The <!doctype> is more important in older versions of HTML, such as the version 4.0.1 since indicating the <!doctype> helped in the process of document type definition (DTD). This is because HTML 4.0.1 was based on standard generalized markup language (SGML). This is not the same case as for HTML5 since that is not dependent on SGML and hence no data type definition is required. Hence, in HTML5 it is not necessary to indicate <!doctype> at the beginning.

17. How many markup elements do you know used in HTML5?

Ans: There are many markup elements, these include:

18. What are the new media elements that are included in HTML5? Why is canvas used in HTML?

Ans: The new media elements include:

Ans: Before the coming of HTML5, the local storage was used to be associated with cookies. Cookies were not beneficial for usages that include a large amount of data. This was passed on from server to server and hence resulted in very slow and ineffective website performance. This is not the same case in HTML5 as data is not passed in every subsequent server and is used only when asked.

Hence, it can be possible to store large amounts of data by itself and still do not affect the website’s performance. Such data is stored in different areas of the website, and the website can access most of the data stored by itself.

20. What is the basic difference between HTML elements and tags?

Ans: The main difference between HTML elements and HTML tags is that elements are used to communicate with the website on how to render the information. They are represented within <>, these form the HTML tags. Tags usually come in pairs and surround the text.

21. What are the limitations seen when serving XHTML servers?

Ans: One of the biggest drawbacks is the poor browser support that the XHTML provides. Internet Explorer and various other browsers cannot parse XHTML as XML. Thus, it is not as extensible as it was promised to be. There can also be a large number of other drawbacks. You can also define those problems.

22. What is the difference between standard modes and quirk modes?

Ans: Quirks mode is a defined compatibility mode that is different from browser to browser and usually does not promise efficient use of the browser. Standard mode is something that is defined by a user, and the behavior is as shown by the CSS and HTML specifications.

23. How many HTML tags should be used for the simplest of webpages?

Ans: It is one of the basic question from web designer interview questions.The simplest of webpages should contain 8 tags, in pairs of 4.
<html>
<head>
<title>
Simple webpage
</title>
</head>
<body>
Hello
</body>
</html>

24. What is the difference between linking to an image, a website and an email address?

Ans: To link an image you use the <img> tags. In this, the user has to define the image source and its attributes through the src tag. For hyper-texting or for linking the different parts of the website, using <a> which is also called the anchor tag. The link is usually specified in the href attribute. The href attribute is also called as hypertext reference and is used to refer the formed link back to the source. The text to be linked should be placed in between the anchor tags. For example: <a> text linked <a>.