Gender stereotypes have always existed and deeply entrenched within societies despite numerous legal and cultural challenges that have taken place over the last few decades.

Gender stereotypes exist in the workplace as well. The division of labour between men and women during the process of evolution could have been responsible for different traits in men and women.

And as men were always tackling tougher tasks like hunting, gathering, travelling and other outdoor chores, they developed more strength, keen vision and other abilities. Here are few pros and cons of gender stereotypes at work. 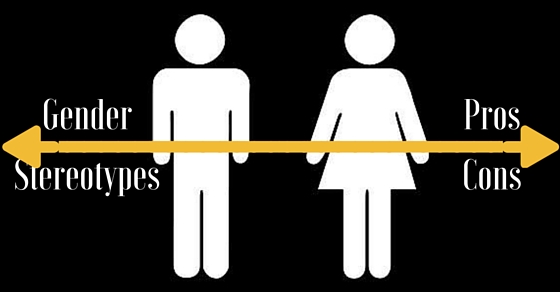 It helps you to get a general idea how a man or a woman can handle a certain type of work or deal with a certain situation.

This helps the owners of businesses make the right decisions while hiring candidates or taking important work related decisions.

Stereotypes are highly useful when you are faced with a situation where you need to take quick decisions.

For example, when you have to interview a candidate for a particular position, knowing a little about the stereotypical man and woman will help you make the right choice during the interview.

Your judgement based on stereotypes may not always be right but it will still help you make a better judgement.

Men possess a great aggressiveness and this helps them be great leaders in their professional lives.

When there is a debate or group discussion, usually men are regarded as sensible speakers. They know how to argue their point by presenting the facts of the situation and without getting carried away by emotions easily.

This makes them ideal for positions where discussion and debates come into picture.

3. Show empathy to others:

People often foster a misconception about female employees that they are more empathetic than their male counterparts.

Women, especially the ones who are in the higher positions, can use this stereotype to their advantage by being more approachable.

They can thus make their employees happier and more productive. Being a boss or climbing the success ladder is never an easy task.

But women who use the stereotype to their advantage and create a good rapport with juniors tend to be more successful.

Another common gender stereotype is that the fairer sex lacks physical strength.

While women do lack physical strength in general compared to men, there are women who possess the strength and physique that may be required in certain fields.

A gender stereotyping may snatch the opportunity they completely deserve.

Women can, therefore, use the core skills to move up the professional ladder taking full advantage of this gender stereotype.

Many people are of the opinion that women are chatterboxes. Though this stereotype may or may not be true, some women do have the reputation of being chatterboxes.

Ladies who are known to gossip too much can turn this habit into an advantage by developing their public speaking skills.

A person who has good communication skills can present their own ideas in front of others during business meetings.

Chatterbox is a crude word to define women with good speaking abilities and communication skills. Once they refine these speaking skills, they sure can achieve success in their professional lives without much difficulty.

Women are viewed as generous, nurturers and more caring. All these attributes are closely associated with maternal instincts.

Being compassionate at the workplace can help a woman gain a high level of trust within the office.

People who are patient and good at helping others are ideal for a career in HR management.

7. Get more attached to your work:

Many people assume that women are more sentimental and get easily carried away by emotions.

This may not always be true. If as a woman, you are emotional, you can channelize your emotions in a positive manner and be passionate about what you do.

Showing a high level of commitment towards your work can help you create a good impression on the management and make you a vital part of the organization.

The number of successful and achieving women around the globe prove this fact.

8. Add some personal warmth while negotiating for salaries:

This could prove to be highly effective in the case of women.

Rather than asking for a higher pay – which is normally accepted as masculine behavior – try to emphasize on the exact skill sets you possess, which will help in the growth of the organization.

It would be synonymous with nurturing female behavior. You can eventually convince your boss by adding more personal warmth to the conversation.

9. Gain a positive image among co-workers:

Women who have a helping attitude can make full utilization of the common notion that ladies are highly caring by helping their co-workers whenever they face any problem.

This will help them to create a good image among their co-workers.

Disadvantages of Gender Stereotypes at work or in Professional lives:

Just as there is a positive side, there is also a negative side to every aspect. This is also true in case of gender stereotyping.

The drawbacks of gender stereotyping affect people’s careers and prevent them from being successful in their careers.

This may happen in many different ways. Some of the common ways are listed below for your knowledge and reference.

This is a major problem faced by females in industries, which are male dominated.

They may be seen by some male co-workers as being given an undue advantage or usurping a position meant for a close friend.

The resentment and envy might lead to sexual harassment in worst circumstances.

2. Discords at the workplace:

If a new employee is entrusted with an important task, then it may cause discord among people who have been working with the company for quite some time.

This may lead to discord between different groups and damage the work atmosphere within the office.

3. Being discharged from services during motherhood:

Motherhood still is looked upon as something which is the primary responsibility of women.

There are many organizations that do not allow their female employees to go on extended maternity leaves and they discharge them from their services.

Within organizations – irrespective of their size – favoritism and partiality does exist.

There are often instances when women are overlooked for promotions and people who are regarded as close to the management are given precedence.

This may happen due to the perception that certain roles are fitter for men. Such partiality can cause a lot of heartburn and resentment among people who deserved promotion and has a bad impact on the office environment.

This is the most serious issue related to gender-based discrimination at the workplace.

Even if you go by recent industry trends, you will find women on an average earn lower than men on the basis of education and experience.

So, despite legislation, gender-based discrimination in the workplace exists.

6. Discrimination in hiring as well as firing:

Gender-based stereotypes play a major role in hiring and firing of employees even within big organizations.

Within Fortune 500 companies, women make up only 15% of corporate officer positions and less than even 2% in CEO level positions.

Therefore, the chances of women getting top management level positions are extremely low.

This is a sad reality but we need to take steps to change the scenario for women. We need to put the rules in the right place so that women who put their efforts and achieve success should gain appreciation for the same.

Many do not know how to survive employee layoffs so recession and similar other financial crunches should affect the less efficient or enthusiastic employees. The decision should not be based on gender stereotyping as it is completely unfair.

7. Lack of cooperation from co-workers:

There are some roles that are traditionally dominated by men within organizations. Women working in these profiles may find it really difficult to acquire cooperation from their male co-workers who may be jealous of their success.

This has been the case in many industries in the technical field.

Be it medicine or engineering, women had a real tough time succeeding in these male dominated careers. The hurdles in their path would be much less if the men in the industry cooperated.

Despite consistently performing well in their work, women are often not recognized for the work that they do.

Even after putting in a lot of effort, the credit for the work is often taken by people who are in higher positions in the company’s hierarchy.

People need to understand that just being a woman should not stop her from achieving success. If she is putting in the required effort and achieving the desired results, she should be appreciated for the same.