It is no new fact that as time is going by and as people are realizing that anything is possible if you simply believe, there are more and more people who are daring to dream big and harbor dreams of becoming entrepreneurs.

Being an entrepreneur is certainly not an easy job at all and it is unfortunate but true that not many people realize that these individuals have to work very hard and whatever they achieve is by the sweat of their brow.

So if you are an entrepreneur looking for some motivation on a day when you are low then here are some TED talks for entrepreneurs which you can view. 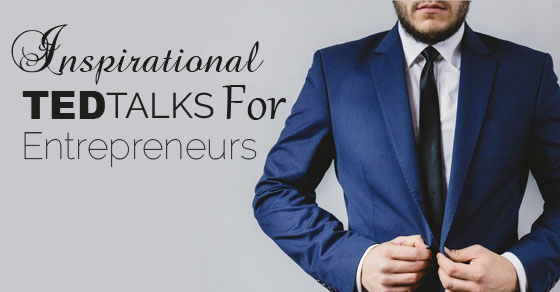 The following mentioned are few top ted talks motivation entrepreneurship videos. They are

1. Gary Vaynerchuk: Do What You Love (No Excuses!)

Children are those individuals that dare to dream and they have a great amount of curiosity within them. No matter what, they never shy away from asking questions or clarifying doubts which they might be having.

In the roughly 15 minute long ted talk, Gary Vaynerchuk who is himself a famous entrepreneur tells us that we should never stop dreaming big and also his inspiring ted talk ideas encourage us to follow our hearts and do what we love.

Jobs only seem boring when you work towards something which you are not exactly interested in.

When you are an entrepreneur you cannot focus your attention on simply one thing, rather you have to ensure that you are a Jack of all trades. If you ignore any part of your firm or organization, that is bound to cost you heavily.

Anyone in the business world will know that sales and advertising are key to maintain a successful business and Rory Sutherland in his roughly 16 minute long video, speaks in an intriguing, interesting as well as humorous manner.

That video is especially appealing for those entrepreneurs who are having trouble with their sales department.

3. Derek Sivers: How to Start a Movement

Merely hearing about things which you ought to do as an entrepreneur will not be very appealing to you as a listener.

What makes the roughly 3-minute long ted talk by Derek Sivers so appealing is that he is someone who has built his business up from scratch as he too started at ground level where he was a musician and a circus clown.

Listening to amazing success stories like his will appeal to viewers much more and encourage them to have faith in their dream and not let anyone stand in their way with their negative thoughts and perceptions.

The business world is not an easy place to survive in and it is usually only those who are immensely sharp as well as forward that can get ahead in life and make the most of every chance that happens to come their way.

One of the most important skills that are required by any entrepreneur is the skill of leadership.

If you are not a good leader, then sooner or later things are going to fall apart right before your very eyes. The 18 minute long video by Simon Sinek is inspiring for those who need to brush up on this skill.

5. Dan Ariely: Are We In Control of Our Own Decisions?

The man by nature is a very social animal who prides himself on being able to talk and think and rationalize things out. Yet in the inspiring video of about 17 minutes and 22 seconds, Mr. Dan Ariely talks about how we are not as rational as we do perceive ourselves to be and he goes on to defend his statement.

The video is indeed different as not merely does it inspire us to dare to challenge the known, but in addition to that, it helps us to understand our psychology well so that we can move ahead in life making the most of all the talents and abilities which have been given to us.

6. Seth Godin: How to Get Your Ideas to Spread

As an entrepreneur you have probably heard of this man called Seth Godin who is nothing short of a legend as well as a guru in the business as well as the entrepreneurial world.

Listening to him speak is indeed very inspiring and in the 17 and 5 seconds long video he explicates on being remarkable. He is indeed a wise man and listening to what he has to say and heeding his advice is bound to help you immensely in time to come.

Making your share of mistakes is good indeed, yet you should try and absorb as much as you can from such knowledgeable individuals as him.

It is not for nothing that the roughly 29 minutes motivational ted talks video by Richard Branson is inspiring and helpful for entrepreneurs especially on days when they are feeling low.

The ted talk is nothing but a masterpiece that depicts the various feels and emotions which an entrepreneur experiences whether it is his ups and downs in his career, the motivation which he often requires when he is feeling under the weather or even his near death experiences. The interesting ted talks are indeed all in all very optimistic as well as motivating.

One of the most challenging parts of being an entrepreneur is narrowing down on as well as trying to figure out exactly what it is that customers want from a particular company or product.

If you are an entrepreneur who is at sea about the above stated things then watching his 171/2 video is bound to help you in the time to come. Entrepreneurs must ensure that their advertisements and products are comprehensive and appealing to the customers and keeping this in mind Gladwell himself presents his latest ted talk speech unconventionally by referring to the quest for a perfect spaghetti sauce.

One of the biggest reasons why entrepreneurs are shy of taking risks is because they worry that what would happen to them in the event of their risk not paying off.

In the 18 minute and 7 second long must watch ted talk, Mr, Tim Harford uses a particular example of a popular company to show how even the biggest of companies employ the policy of trial and error to test the waters and see whether or not the customers will take well to a newly released product or not.

Sadly not all ideas which you might think are good will be big successes in terms of the profits they generate.

It is popularly believed that good ideas only come at some points in time when we least expect it and moments of inspiration can strike at any given point in time.

However, in the 17 minute and 46 second long best motivational ted talk by Steven Johnson talks about how the moment of inspiration or a Eureka moment might not come at as a random point in time as we might perceive.

In addition to this, he also addresses in his good ted talks, how it is that small business owners rely heavily on the strategy to ensure that their businesses can be success stories.

Cameron Herold’s video is a good watch for even those entrepreneurs who do not have children. Children in the video do not refer to your sons and daughters rather on the contrary it refers to the future generation in general.

The video encourages us to try and encourage our children to be entrepreneurs on their own rather than just being individuals who after school or college will join a company as an employer where they will have to work tirelessly towards building a company that they cannot even call their own.

12. Dan Cobley: What Physics Taught Me About Marketing

As an entrepreneur it is important for you to be able to realize when your promotional methodologies are becoming a tad bit stagnant and if such is the case and you are wondering what it is that you need to do then switch on your smartphone or desktop and watch the inspiring 71/2 minute popular ted talk by Dan Cobley, who gives you some good advice to help you along the way when you feel like you have hit a standstill. All this genius does is simplistically explain some principles.

Do not fool by the boring and clichéd title. The 12 minute and 21 second ted talk by the talented and humorous Shawn Achor bound to lift your spirits and give you a new perspective on life.

What we often do not realize in life is that simple change in perspective can go a long way in shaping your reality. It is all a matter of changing your negative mindset and focusing on only positive things that will help you as well as your business in the long run.

Dare to dream big but ensure that at all times you are more than willing to work tirelessly towards your goals and dreams.

Watching the roughly 171/2 minute long video by Julie Burstein is bound to make you feel good especially as an entrepreneur, over the last few days you have been feeling a little pessimistic.

Always remember that your mind makes up has a big influence on the kind and quality of work which you able to deliver.

In this most watched Ted Talks, Julie Burstein talks about the most powerful as well as important sources of creativity. Her words are all based on interviews with talents as well as popular individuals.

Daring to disagree is a ability which not many of us bless with and if you as an entrepreneur believe staunchly that your company compose of ‘’yes men’ who withhold whatever they have to say to prevent any kind of conflict then watching his nearly 30 long ted talk bound to help you and tell you about how you can bring about changes in your company so that people dare to speak their mind without having any kinds of fear as well as qualms.

Success is something which we are all striving after and if you as a busy entrepreneur have even the short span of about 4 minutes left then you should make it a point to watch the ted talk by Richard St. John where after questioning nearly about 500 successful individuals he comes up with eight secrets of success which are more or less common to all the individuals who asked. Since the video is so short you can watch it even on the go.

Anyone who is an entrepreneur would know that it is a thankless and even a tiring job where no day of the week you can decide to take a holiday. Your company and organization will only be a success if you are willing to put in your best at all points in time.

If you are not driven and motivated from within, then success is something that will never come your way no matter what. Hopefully, the above mentioned points will help you along your way and inspire you to never stop dreaming and realize that sometimes taking a risk might not pay off.