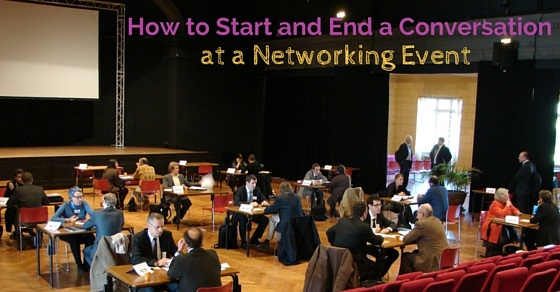 Trying to remain a significant part of the business world is not an easy task. If you wish to gain some relevance in the business world it is of paramount importance that you understand how to broaden your network. This can only be achieved if you improve your communication skills. If you are someone who finds it incredibly awkward to walk up to someone new at a networking event and strike a conversation, then given here are ways on how to start and end a conversation at a business event. How to Start a Conversation at a Networking Event:

There are many types of conversation topics but you have to choose according to the networking business. The following mentioned are few tips on starting conversation in a professional networking groups.

1. Just keep it simple if you are very shy:

Many people make the mistake of starting the conversation in a complicated way. Unless you are someone who has exception conversational skills, it is advisable that you just keep it simple and do not make elaborate plans in your mind. There is no harm in starting with a simple ‘How do you do’. This is an age old tried and tested method to start a conversation, which almost never goes wrong. The ability to keep things simple is a gift in itself which not many of us are blessed with. Being simple does not show you to be stupid or silly in any way at all.

2. Start a conversation with the person nearest to you:

Rather than wasting too much time, scan the entire event to see who you would like to start a conversation with, try and talk to someone who is nearest to you. In the business world, time is of great essence, you should not waste it at any cost. Even if you are standing in the line waiting to serve your food, strike a conversation with someone who is immediately before or after you. Start the conversation by saying something about how good the food looks. Even when you are at the bar, talk to the person who is standing beside you.

3. Find someone who is sitting alone and strike a conversation:

If you are someone who is rather socially awkward, it is advisable that you initially target someone who is sitting alone. Being able to talk comprehensively in a big and intimidating group is not something which we are all capable of doing. Talk to someone who is sitting alone, especially if he looks like he is rather bored. This is not very tough at all. However this having been started shy away from going up to a loner who looks angry because chances are that he is not interested in talking to anyone at the moment.

4. Start off by complimenting the person:

Whether we admit it or not, all of us love to be complimented. One of the best ways to start a conversation at a networking event or a business networking group would be by complimenting the person who you wish to speak to. This will immediately make him be more interested in you. If you are familiar with the work which the person has done, then you could compliment him or her on that. Ensure that what you are saying sounds genuine. If you go out of your way to compliment the person with exaggerated and high sounding words, then chances are that he might think that you are poking fun at him.

5. Talking about sports is a good idea:

Sports are something which almost everyone loves to talk about. Whether it is cricket, football, basketball or even tennis, sports is something which has served as an good conversation starter since time immoral. Though it is not always the case, trying to strike a conversation with a woman by talking about sports, might not always be a good idea. Before using sports as a conversation starter, ensure that you have adequate amount of knowledge in the field, it would be rather awkward, if you are unable to continue your conversation once you have started it. Reading a little sports news online daily, could really help you.

6. Seek advice from that person as a conversation starter:

Many people believe that a great way to start a conversation at a networking event would be to seek advice from someone who you would like to interact with. You need not seek advice about something very complicated. Seek advice about which drink would be a better option or which item on the menu sounds more interesting to try out. Once you have successfully received an answer from the person then you can go on to introduce yourself to him or her. When you seek advice from someone, you naturally make them feel a little important and that is a good thing.

7. Make a request or ask a favor from the person:

Rather than always breaking your head thinking about something to say, you can start a good conversation simply by making a request to the person. Your request should not be something which is to elaborate. Simply pretend that you have forgotten to wear your watch, so ask the person for the time. In addition to this, say that you forgot your phone so ask if you can make a make a phone call from his phone. Once you have done this, you can introduce yourself in a polite manner and even make small talk about how the event is. From then on, the conversation can take its own course.

8. Starting off with a joke is a good idea:

There are various kinds of networking events. Based on the mood and temper of the event you should think of various ways to start a conversation. If it is an upbeat event then you can begin with a joke. Your joke should be short and sweet. In addition to it being short and sweet ensure that it is not offensive or crude in any way. If you successfully make the person or people concerned laugh, then continuing the conversation from this point on will not be tough to do. This joke will serve as not merely a funny conversation starter but also an ice breaker.

9. Ensure it does not sound rehearsed:

If you know for a fact, that you might end up saying something silly if you do not practice in advance, then ensure that you think about the things you would like to say from beforehand. This having been stated, one of the worst things which you can do is sound fake or rehearsed. A mature professional will never like to come across in such poor light. So it is advisable that you make pointers about what it is that you would like to say and from then on just speak in a natural and free flowing manner. Initially things will be tough for you, but as the conversation progresses you will feel more at ease.

10. Talk about some pressing issue:

Almost all adults follow the news with great interest. You cannot go wrong by picking up this way of starting your conversation at a networking meeting. You will instantly be able to create a good impression in the mind of the person you are speaking to if you are able to talk in a proper manner. Everything you say should be factual and even informed. At no point in time should you think that it is okay to make up facts and forge details. You need not only limit yourself to global issues, you can talk about local news or even business topics. Conversations begun like this are interesting and inviting.

11. Do not pick a dull subject to start with:

One of the worst things to do, when trying to start a conversation, is a picking up a topic which is dull and boring. If you fail to think of a good conversation topic, then no one would be willing to engage in a conversation with you. In addition to this at no point in time should you think that it would be alright to gossip about other people. Using a juicy piece of gossip as a convo starter is something which is very low and usually done by people who are rather narrow minded. So as tempting as this might be, never indulge in something like this.

How to End a Conversation at a Networking Event:

The following mentioned are few tips on closing a conversation at a network business event.

1. Give the person your business card:

Many people are very confused about how to conclude their conversation without coming across as rude or impolite. Across the business world it is a known thing that when someone hands you the business card it automatically means that the conversation is over. So hand the person your business card and politely move away. There is no harm in doing this. You need not socialize with merely one person throughout the event; your aim should be to meet as many people as possible. The more you interact with others, the more you broaden your horizons.

2. Shift the focus to something else:

Rather than thinking too hard about what to do. Simply direct the attention of the person to something else. Once you have successfully shifted the attention from yourself on to something else then you say goodbye and take your leave. You need not feel bad doing something like this; these are all done things in the business world. Master the art of socializing well and you will not stick out like a sore thumb at any networking events. You will be recognized as someone who is very well behaved and a wonderful conversationalist. Having a reputation like this is wonderful indeed.

3. Introduce a third person to the conversation:

4. Pretend you have spotted another friend:

Once you think that the conversation has run its course, rather than saying too much, simply pretend like you have spotted an old friend who you would like to go and catch up with. All you need to do is simply say ‘I think I have spotted one of my friends, can I catch up with you later?’ This is going to end the conversation on a good note for sure.

5. Say you have to make an important call:

6. Mention that you are going to grab another drink:

Finally, since it is an business networking event naturally everyone would like to eat as well as drink with contentment. So use this as an excuse to take your leave from the conversation. It will not seem impolite at all and you can even go ahead and ask the person if he or she would like anything from the bar or buffet.

Many people believe that starting a conversation at a business event or a network organization is a tough thing, but equally tough is thinking of a way in which to end the conversation. If you fail to leave a lasting impression in the mind of the person who you are speaking with, then your entire exercise has been an utter waste of time. Start off by following these simple things, yet once you gain more experience and wisdom, things will come a lot naturally to you. Over time you will enjoy meeting more people and your business sense will increase by leaps and bounds.