It is the toughest part in anybody’s life to say no to a good friend for a number of reasons. They can come up with some favour, drive, help or loan but saying no can be difficult. The main reason to say no is that the individual feels guilty most of the time and so saying no is bad often. At times when requests are too frequent, there is no other option rather than saying no to friends, saying no should be handled and said in a manner that doesn’t hurt the others. In that manner, let’s glimpse through a few tips on how to say no to a friend. 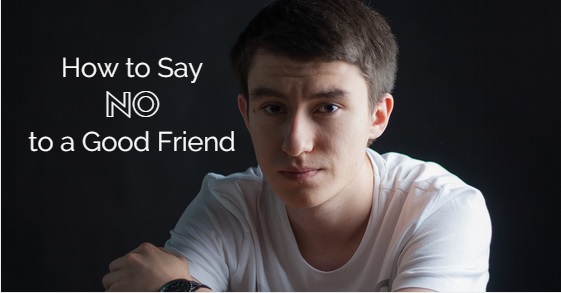 13 Good Ways to Saying No to Friends and Family:

The following mentioned are few tips to learn how to say no without feeling guilty and different ways to say no.

Whether in organisation or home, there are friends who ask for help where some would be easy to do and certain tasks may eat up time and make your work lagging. In that manner saying no can be the only solution to a friend. In that aspects when a friend asks you for a help and you’re already drenched with work, make sure to say no fast. By this way your friend would not hang around you for help and can hunt for some other source for the same help. Instead of thinking how to say no politely, saying it quickly can solve the problem and save time.

Once you say no to your friend, it is usual to justify to your friend with a reason for saying no. There might be a good relationship amongst friends and so explaining the reason for saying no is unavoidable. Also make sure that you do not over explain or offer a complete life history regarding saying no. There are situations where an explanation is not required for few people, but for close friends it is mandatory to have a personal touch. In such situations certain friends will understand and accept your no.

When you have said a no to a friend, you can always suggest another form of support for their requested help. This can be a link, a blog, a worksheet, a person to be introduced and more. This can be something you can give in an alternate manner which is less time consuming, easier, and comfortable than the help they requested. In this manner saying no to a friend can be handled.

It was Steve Jobs who once said that saying no is to be focused on. An individual cannot over clutter their calendar and get drenched with commitments, in that manner saying no can be the right answer. Getting into too many commitments is not good for yourself and your soul too.

5. Don’t take up everything:

When you say yes to everything you will almost be trapped and loaded with piles of work. This will normally elevate your work load. You may have said yes to a few friends for help and accumulating all request can end of with incompletion of work and hence a genuine ‘no’ can be far better in many ways.

There are few people who cannot say no to others as they feel guilty that they would be tagged as selfish. This is because you said no for a particular task and did not dedicate time for your friend’s request. People who always think about themselves and their tasks would never feel guilty about themselves to say no. So fix in your mind or within yourself that you aren’t selfish and if people around you think that way then they are not apt ones to be associated with you. Also think of the past help you have done by saying yes.

7. Pleasing everyone is impossible:

It is true and to be accepted that pleasing everyone in life is impossible. There needs to be a line somewhere or the other. Some feel a lot that by saying no, you may hurt or disappoint a person and may also tend to lose respect but the opposite is the real and true fact. There are people who say yes to everything and find themselves to be loaded with tasks as they will be taken more advantage of. You can please people in life but not always and everybody. And so saying no is vital in many situations in life.

8. Things to enjoy by saying no:

Saying no is never a negative thing, the fact is that when you say no to certain things it means you’re saying yes to a number of other things it happen around. Make a list of all the things that you will do by saying no, you can drive away guilty feeling. By saying no to certain things you are saying yes to family, friends, loved ones, rather than doing something you don’t like. You say yes to yourself and spend time on your hobby, and personal interest. You say yes to be a relaxed person and have a great time. By saying no, you have a reasonable workload without extra work and hence saying no is important.

Some people find it hard to say no as they are afraid that the person who seeks for help would stop talking. When you say no it also predicts that you’re not cared about the person. You may be worried about saying no, fearing that you would be misinterpreted in that situation. All these relationship should be got out immediately and according to the situation saying no does not comprise this meaning.

When you have decided to say no, make sure to use the same voice which you utilize on a telephone. Say no with a firm, calm and clear voice. It is also to be noted that confused, unclear and weak voice can make the opponent exploit you and make you say yes. So be reasonable and say no to your friend without a second thought.

When you’re in a situation to say no, make sure to say no immediately and don’t wait till you’re fed up with the issues. It would be good not to allow feelings to fester too long, when the discussion is started and you know that you cannot help out, say no immediately and do not prolong. Also make sure not to procrastinate the decision of saying no, when a request is put forward make a decision right at the moment so the opponent does not depend on you for the task.

13. Being true to convictions, priorities and yourself:

Being an employee you would have been committed with other work apart from your office work and there are people who interfere in your work and ask for help. This situation can be tough to handle but without an option no is to be said. There are other priorities and promises where you need to be true at and so saying a no for any request isn’t wrong. A good friend would definitely understand the situation and understand you.

Whether in life or career an individual needs to ask help to his friend, and saying a yes or no depends on the situation of the person on the other side. Saying no isn’t wrong or bad as the individual would have his own commitments for the day. The above mentioned are a few tips which can be used to say no to a good friend. Saying no also requires self-confidence and fearlessness. To succeed and move up in life there are situations where you need to say no. Understand the situation and handle as per it by making it a perfect one. There are many sites too which help in saying no to friends. Saying no is never a bad idea or opinion; it just shows that each individual should carry on their own duty without delays. When every individual does their duty there aren’t situations to ask for help and say no to any friend.