As you know it well that a job offer comes into our clenched fist after running through several battlefields. To be honest, it is considered to be among the lotteries. But arises a situation when you are not in a position to accept the offer due to some or other reasons. Now here are few tips to refuse a job offer politely. 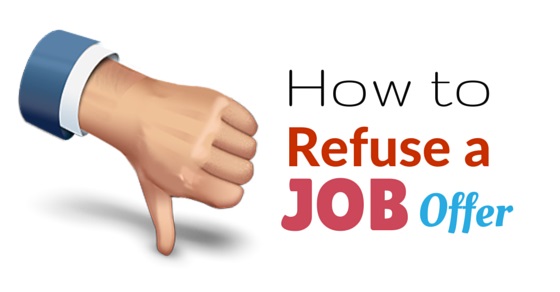 Tips on How to Refuse a Job Offer from a Recruiter:

In such cases you have no other alternative left other than refusing the same. But it is important to be highly graceful along with being courteous while doing the same. It is high time for you to keep the relevant options open in front of you along with avoiding those burning bridges and concluding with an everlasting impression in the mind of the recruiter.

Though refusing a job offer seems to be a bit difficult as it is comprised with hesitation, if done in a proper way it will become easier. Some of the vital steps to be followed can be described in a nutshell as under. The following mentioned are few tips on how to refuse a job offer politely.

Refusal towards Job Offer through Phone:

The invention of the telephone has been a blessing in disguise in the practical life. Refusing a job offer through phone has been considered to be the most convenient method as nobody is able to view each other. In case you are not able to accept the job offer, the first step comprises of making a prompt call. It is better not to delay as the more you delay, less the chances of other candidates to get hired becomes.

When you are strongly determined about the refusal due to compensation, work environment, responsibilities and other reasons, feel free to place the call to the recruiter. Do not forget to thank the person who received your call. Also, try your best to include the usage of some adjectives for the guys who interviewed you.

Avoid overdoing of any task as it will lead to nothing more than wastage of time. After two –three sentences go ahead for cutting the chase. While speaking gives due effort in the maintaining of the right tone as the approach must be a good one. Please do not make your voice sound enthusiastic as the person on the other side may get shocked. Instead, provide him with a hint that the call has been conducted not to deliver any good news.

Speak Out the Truth:

After you have concluded with the required formality, now it is high time to speak the real act associated. Start stating clearly that in no certain terms the offer will be accepted by you. You may go ahead by the following words before the deliverance of the bad news:

Then you may start stating in a brief manner the vital cause for not accepting the job offer. Some of the things to be taken due care includes:

Try to state each and everything in a crystal clear manner. In case you are feeling a bit negative then you may avoid being completely honest.

Speaking clearly and in a steady manner:

Instead of rushing by your words to get off the phone, try to sound clear and confident while delivering the message from your side. Instead of going in detail, you may state clearly that the job offer did not match your requirements.

In case you have got an alternate job offer, then you can be a bit easy. This will let you state that you have been successful in finding another position which truly meets your needs and is aligned to the objectives of the career. Your voice must not reflect the don’t care tone! Try to stress that this was really a tough decision for you. Maintaining a sincere and even tone in the voice will make the person realise the apology of refusing the offer.

Making the Conversation a Meaningful One:

After your turn gets over, it is the turn of the person sitting on the other side to speak out. Feel relaxed and calm as you are not sitting in front of him. Answer all the questions in a desperate manner along with due honesty. As soon as you will be asked questions regarding the decision-making process, the following tips must be followed to make the session a meaningful one:

After the conversation is at the mouth of concluding, it is high time to conclude the same with due grace. After you have mentioned clearly everything about the goal and answering all the questions in a polite tone, keep in mind that the conversation must be beneficial for both. Some of the useful tips include:

Penning of a Smart Letter:

After the phone has been hung up, the worst thing is near about over. In order to complete the whole procedure, penning a smart letter to the recruiter will be a good decision. This will lead to tendering of the offer in the smartest way. This process may seem to be quite time consuming, but at the same time will make you look and feel highly responsible and professional.

Some valuable tips regarding penning of a professional refuse a job offer letter can be mentioned in a nutshell as under:

In case you are determined to refuse a job offer, it is high time to inform the recruiter so that the next guy gets a chance. You can inform the same through a mail in case of casual environment especially. While jotting down the body of a letter it is recommended to employ prompt language and to the point description.

The letter penned by you must be an impressive one. It must not include the language for the sake of writing only. If you can hold a concise as well as a polite opening through proper salutation like “Dear”, it will sound to be a good one.

It is high time to note that the matter of the letter must comprise of formal language only. The first sentence must bid hearty thanks to the recruiter for the position offered to you.

4. Stating the reasons in a concise manner:

Now the time has come to state the vital reasons for refusing the proposal in a nutshell but clear manner. While writing, you may state that the position did not suit your objectives. You may also state that as you have found a more aligning position, you will not be able to accept the offer. Please note that the post must not be longer than two paragraphs.

As nobody can predict the future, it is better to be polite. Do not forget to wish the recruiter and company good luck. Maybe that you will get hired for a senior position in that company in future.

6. Proofreading the matter before posting:

After you have concluded with the inclusion of all necessary stuff, it is better to take out time to proofread the letter. This will assure you of any inadvertent errors if any for their correction. Even if you are not accepting the job, it is good to behave like a meticulous and thoughtful person.