This is most common when you are about to attend an interview for a higher position or sometimes for crucial positions too.

In this post, you will understand the meaning of panel interview in short, its advantages and disadvantages. 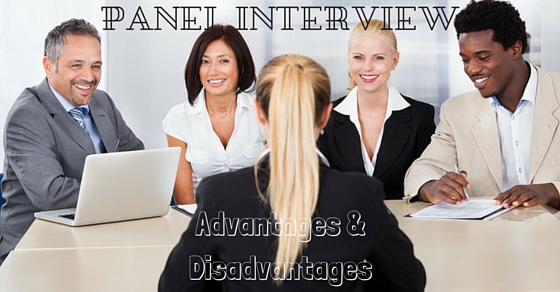 What is a Panel Interview?

Through this method, the multitasking ability of the candidate, pressure handling ability, mental ability to concentrate each question, and his/her experience is evaluated.

Panel interviews are nothing but the candidate might have to attend an interview with multiple interviewers.

The number of interviewers participating might differ according to the level of interview.

Mostly the panel members in the interview might include the human resource representatives, team lead for the team which they hire, and senior members like delivery managers etc. The panel team might differ according to the organization’s type.

1. Analysing the pressure handling capability.
2. Communication skills and how well the candidate socialize.
3. How flexible the interviewee is with different types of people.
4. Ability to coordinate with every employee and how well they get along with all members.
5. Behavioural characteristics or how well they establish their corporate etiquettes in an interview.
6. Multitasking ability of the candidate when asked many questions at a time.

How to Perform Well During a Panel Interview?

Researching about the company before attending an interview can be considered as one of the important and beneficial tip that every candidate need to follow. Also getting a brief idea about the role you are applying and about the interview process can be very helpful.

Though preparation is considered as the primary step to get through any kind of interview and get employed, but there are few ways on dealing with different kind of interviews specifically. The hiring process of a company differs from another company, so does the interview rounds.

Here we are specifically talking about the panel interview. As the definition goes by, in a panel interview there will be more than one interviewer trying to assess your ability and skills for the job applied.

As per the company’s point of view, panel interviews are conducted for a few main reasons, they are

1. Saving time
2. Lessen the interview rounds
3. To assess how a candidate would react in a group situation.
4. People linked to the hiring process, getting to an agreeable decision together

For example, the total time and effort involved in the other process would be around three hours. In the case of the panel interview, the whole process would finish within an hour.

2. Better assessment than one on one interviews:

As there is a number of interviewers in the same place, the candidate would be interviewed under various perspectives.

Hence the candidate would be assessed better than interviewed by a single person. This is one advantage of having a panel interview as there is a good assessment of the candidate.

3. No room for partiality or personal preference:

In the process of a panel interview, there is no space for any kind of partiality as there are many interviewers.

No personal preference or hidden partiality will occur. This is one advantage to the interviewee as well as the organization to choose the right candidate.

In a panel interview, there might be various skilled persons whereas every one might be strong in their job role.

One might be strong in human resource, technically skilled and also there might be different intellectual levels.

Hence questions asked will have a different perspective which will help for the better assessment and right choice of the candidate.

5. It makes the candidate familiar with the team as well company’s work culture:

Once a candidate goes through a panel interview, the interviewee would be familiar with the overall team as well they would get a hint about the company’s culture, senior employee’s expectations and more familiarity with them.

Hence, the panel interview is something which helps them to get oriented with the team and the company’s work culture.

6. It is a very reliable method:

Panel interviews are always considered as a reliable method as it is a particular interview procedure followed by a group of panel members.

This overall interview process has interviewers of different age category as well as the experience of the person to differs. Hence, this type of interviews is considered to give a reliable output.

7. Consistency in the format:

In most of the panel interviews, interviewers always stick to a specific format of asking questions like in order wise.

Hence, the output of panel interviews will be consistent as well as straight forward results either positive or negative.

8. Training to the new panel member as well:

Panel interviews are considered to be a good choice of interview method to the interviewers as well.

Sometimes, there are interviewers who would need more experience to conduct an interview. In this case, panel interviews would help them to gain a good experience in conducting an interview.

1. There are chances of time delay:

In a panel interview, where there are more than 5 members there are chances of time delay because of assembling every member at a single place.

For example, human resource members, team lead might assemble earlier, due to the various other activities of the senior managers there might choose some other time or tend to come late.

In these cases, there is lots of time delay and a waste of time in the panel interview.

2. It has a direct impact on production:

As there are many interviewers of various job categories involved, there is lots of time consumed and it also causes little production loss due to the absence of panel members in the workplace.

Sometimes interviewers also have to spend time preparing for the interview. This might also cause production loss in the organization.

3. It builds pressure on the candidate:

Due to the presence of many interviewers, there are chances where an interviewee might get nervous and stammer under pressure.

4. There are chances of the clash between the panel members:

Again in a panel interview, when there are members of different job roles, their perspective in asking questions might differ and there are lots of chances to argue about their view point.

Hence, there are lots of chances in the clash between the interviewers. This might lose the peace in the place as well it causes loss to the whole purpose of the interview.

In a panel interview, the need for the new candidate is very important for the team lead or anyone in the panel member who needs the interviewee to his/her team.

In this case, there are more chances they tend to ask many questions to the interviewee and it might also dominate the whole panel interview and disturbance among the other panel members.

6. More stress due to status difference:

Generally, in any kind of interview, there are lots of chances the interviewee might feel low or less in confidence due to the pressure of getting into a new job or atmosphere.

In those cases, facing too many interviewers who are all of different job role and of higher scale in their jobs might make them feel the status difference as well create more stress on them.

This is one reason it is better to attend one on one interviews then panel interview.

Panel interviews are costlier and little high on everything because of assembling higher authorities of the organization in one place.

For example, if the panel interview holds a senior vice president the administration has to take extra care of everything right from the place of the interview to food arranged to them.

8. Every single answer might have different views from everyone:

When a candidate answers one single question, it might be taken in different views by different members of the panel.

Sometimes this might have a positive impact and sometimes it might create a negative impact too. It will look like an apple in one person’s view and as a pear in the other person’s view. This will create confusion as well as no solution would be derived.

Hence, the panel interview might not suit for a few organizations as well the interviewee’s perspective.

Panel interviewers mainly try to analyze the candidate’s behavioural and situational skills by asking questions related to it. Here are a few common panel interview questions: