Employees are like a backbone of any organization. A famous quote by Richard Branson goes as “Clients do not come first. Employees comes first. If you take care of your employees, they will take care of the clients”. 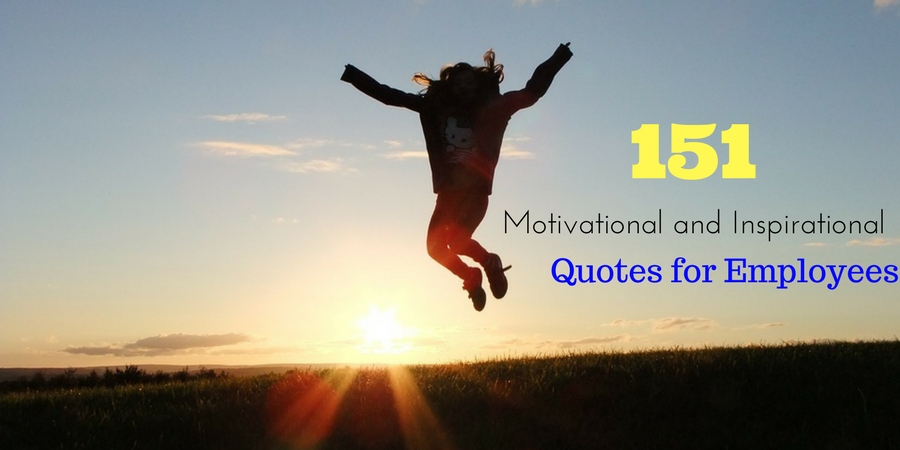 We understand very well that managing and running an organization is a big task as well as responsibility. Employers have to look in each and everything that is connected to their organization , be it the maintanence, productivity, proper work process, task assignation, deadlines, safety and security etc.

Oops!! we missed one important thing and that is “Employee management”.
We do not ask the employers to treat the employees as Kings but at least not as machines or slaves.

Employees and workers work very hard for the company benefit and success. Overburdening of work on them makes them dissatisfied and stressed out, which would ultimately lead to poor performance and a decrease in productivity of the company.

The following mentioned are few motivational quotes for employees that would boost their morale.

1. The magic formula that successful businesses have discovered is to treat customers like guests and employees like people. – Tom Peters

2. Everyone talks about building a relationship with your customer. I think you build one with your employees first. – Angela Ahrendts

3.  “Every experience in your life is being orchestrated to teach you something you need to know to move forward.” – Brian Tracy

5. “You must remain focused on your journey to greatness.” – Les Brown

6. “The best preparation for good work tomorrow is to do good work” – Elbert Hubbard

7. “Every worthwhile accomplishment, big or little, has its stages of drudgery and triumph: a beginning, a struggle and a victory.” – Mahatma Gandhi

8. “Review your goals twice every day in order to be focused on achieving them.” – Les Brown

10. “The results you achieve will be in direct proportion to the effort you apply.” – Denis Waitley

13. “The future belongs to those who believe in the beauty of their dreams.” – Eleanor Roosevelt

14. “Accept responsibility for your life. Know that it is you who will get you where you want to go, no one else.” – Les Brown

15. “You have to fight to reach your dream, you have to sacrifice and work hard for it.” – Lionel Messi

16. “Dedication, determination and desire is what it takes.” – Jackie Joyner-Kersee

17. “Anyone who has never made a mistake has never tried anything new.” – Albert Einstein

19. “The world is divided into people who do things, and people who get the credit. Try, if you can, to belong to the first class. There’s far less competition.” – Dwight Morrow

20. “A life spent in making mistakes is not only more honourable but more useful than a life spent doing nothing.” – George Bernard Shaw

21. “Becoming is better than being.” — Carol Dweck

23. “The sun himself is weak when he first rises, and gathers strength and courage as the day gets on.” — Charles Dickens

25. “If I had nine hours to chop down a tree, I’d spend the first six sharpening my axe.” —Abraham Lincoln

27. “Intelligence is the ability to adapt to change.” — Stephen Hawking

28. “Leaders can let you fail and yet not let you be a failure.” — Stanley McChrystal

29. “It is amazing what you can accomplish if you do not care who gets the credit.” – President Harry S Truman

31. “Whatever you can do – or dream you can, begin it. Boldness has genius, power and magic in it.” – Johann Wolfgang von Goethe

32. “A dwarf standing on the shoulders of a giant may see farther than the giant himself.” –Didacus Stella

35. “Opportunity is missed by most people because it is dressed in overalls and looks like work.” – Thomas Edison

38.  “Kid, there are heroes and there are legends. Heroes get remembered, but legends never die. Follow your heart, kid, and you’ll never go wrong.” — Babe Ruth

43. “The only way to achieve the impossible is to believe it is possible.” — Charles Kingsleigh

44. “Man is only truly great when he acts from the passions; never irresistible but when he appeals to the imagination.” — Benjamin Disraeli

45. “When we strive to become better than we are, everything around us becomes better too.” — Paulo Coelho

46. “We must believe that we are gifted for something and that this thing must be attained.” — Marie Curie

47.  “Intelligence without ambition is a bird without wings.” — Salvador Dali

48.  “If something is wrong, fix it now. But train yourself not to worry, worry fixes nothing.” — Ernest Hemingway

50. “Don’t judge each day by the harvest you reap but by the seeds that you plant.” — RobertLouis Stevenson

51.  “You have brains in your head. You have feet in your shoes. You can steer yourself any direction you choose. You’re on your own. And you know what you know. And YOU are the one who’ll decide where to go…” — Dr. Suess

52. “Sometimes the fall kills you. And sometimes, when you fall, you fly.” — Neil Gaiman

53. “In matters of style, swim with the current; in matters of principle, stand like a rock.” — Thomas Jefferson

54.  “Do what you do so well that they will want to see it again and again and bring their friend.” — Walt Disney

55. “Work is accomplished by those employees who have not yet reached their level of incompetence.” – Laurence J. Peter

58. “Always do your best. What you plant now, you will harvest later.” – Og Mandino

59. “Our greatest weakness lies in giving up. The most certain way to succeed is always to try just one more time.” – Thomas A. Edison

60. “Optimism is the faith that leads to achievement. Nothing can be done without hope and confidence.” – Helen Keller

61. “It does not matter how slowly you go as long as you do not stop.” – Confucius

62. “Believe in yourself! Have faith in your abilities! Without a humble but reasonable confidence in your own powers you cannot be successful or happy.” – Norman Vincent Peale

65. “Accept the challenges so that you can feel the exhilaration of victory.” – George S. Patton

66. So many things are possible just as long as you don’t know they’re impossible. — Norton Juster

67. Everything should be made as simple as possible but not simpler.— Albert Einstein

68.  Innovation distinguishes from a leader and a follower. — Steve Jobs

69. “The moment you doubt whether you can fly, you cease forever to be able to do it.” — J.M. Barrie

70. “Everything you’ve ever wanted is on the other side of fear.” — George Addai

71. “I can’t go back to yesterday because I was a different person then.” — Lewis Carroll

73. “There is only one way to avoid criticism. Do nothing. Be nothing. Say nothing.” — Aristotle

78. “It isn’t the mountains ahead to climb that wear you out; it’s the pebble in your shoe.” — Muhammad Ali

79.  “If your actions inspire others to dream more, learn more, do more and become more, you are a leader.” — John Quincy Adams

82. “Success is the sum of small efforts, repeated day in and day out.” – R. Collier

83. “A year from today you will wish you had started today.” – Karen Lamb

86. “You can never cross the ocean until you have the courage to lose sight of the shore.” – Christopher Columbus

87. “The only person you are destined to become is the person you decide to be.” – Ralph Waldo Emerson

89. “I’m a greater believer in luck, and I find the harder I work the more I have of it.” – Thomas Jefferson

90. “A boat doesn’t go forward if each one is rowing their own way.” – Proverb

91. “A clay pot sitting in the sun will always be a clay pot. It has to go through the white heat of the furnace to become porcelain.”– Mildred Struven

95. “All growth depends upon activity. There is no development physically or intellectually without effort, and effort means work.”– Calvin Coolidge

97. “Be a user of your own product. Make it better based on your own desires. But don’t trick yourself into thinking you are the user.” – Evan Williams

98. “Believe you can and you’re halfway there.” – Theodore Roosevelt

99. “Challenges are what make life interesting and overcoming them is what makes life meaningful.” –Joshua J. Marine

102. “Criticism is the best sign you’re onto something.” – Micheal Lopp

103. “Do the things you like to be happier, stronger & more successful. Only so is hard work replaced by dedication.”– Rossana Condoleo

105. “Embrace the pain to inherit the gain.” – Habeeb Akande

106. “Everything has beauty, but not everyone can see.” — Confucius

107. “Everything yields to diligence.”– Thomas Jefferson

109. “Goodness and hard work are rewarded with respect.”– Luther Campbell

110. “Hard work without talent is a shame, but talent without hard work is a tragedy.”– Robert Hall

111. “Accept the challenges so that you can feel the exhilaration of victory.” – George S. Patton

112. “In order to succeed, we must first believe that we can.” – Nikos Kazantzakis

116. “There’s zero correlation between being the best talker and having the best ideas.” —Susan Cain

117. “Unless someone like you care a whole awful lot, nothing is going to get better, it’s not.” — Dr. Suess

118. “You will never plough a field if you only turn it over in your mind.” — Irish Proverb

119. “Ignorance and fear are but matters of the mind—and the mind is adaptable.” — Daniel Kish

124. “Opportunity is missed by most people because it is dressed in overalls and looks like work.” — Thomas Edison

125.  “It is by going down into the abyss that we recover the treasures of life. Where you stumble, there lies your treasure.” — Joseph Campbell

128. “The power of imagination makes us infinite.” — John Muir

129. “I attribute my success to this: I never gave or took any excuse.” – Florence Nightingale

130. “I do not care about happiness simply because I believe that joy is something worth fighting for.”– Criss Jami

131. “I don’t have a blue-collar job. It’s more of a green collar, because of all the yellow sweat stains mixing in.”– Jarod Kintz

132. “I have learned over the years that when one’s mind is made up, this diminishes fear.” — Rosa Parks

133. “If everyone is moving forward together, then success takes care of itself.” – Henry Ford

135. “If You Are Working On Something That You Really Care About, You Don’t Have To Be Pushed. The Vision Pulls You.”- Steve Jobs

136. “If you can laugh together, you can work together” – Robert Orben

138. “If you hear a voice within you say “you cannot paint,” then by all means paint and that voice will be silenced.” – Vincent Van Gogh

142. “The secret of getting ahead is getting started.” – Mark Twain

143. “The will to win, the desire to succeed, the urge to reach your full potential… these are the keys that will unlock the door to personal excellence.” – Confucius

147. “Keep your eyes on the stars, and your feet on the ground.” – Theodore Roosevelt

148. The past cannot be changed. The future is yet in your power. – Unknown

149. “You can’t cross the sea merely by standing and staring at the water.” – Rabindranath Tagore