Ruby is considered as one of the famed programming languages and is utilised as one of the web development frameworks in the present scenario. Ruby is a high-level programming language, which is interpreted as Python, Pearl, and object-oriented like Java. Being originated in Japan, Ruby is gaining popularity in the US and Europe countries. To Learn Ruby on rails fast from the scratch can be challenging and interesting, there are a number of sources to start learning from. Let’s glimpse through a few aspects of the best way of learning Ruby on Rails from scratch fast. 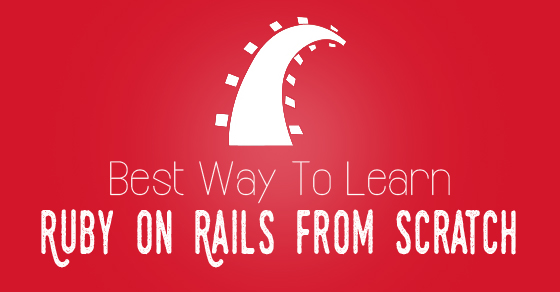 Though there are a number of ways and sources to start learning Ruby on Rails, there is an organized way to get started with the program and learn the language.

An aspirant who inspires to learn Ruby must first install Ruby. In order to develop web applications making use of Ruby on Rails Framework, the mentioned ruby software is to be installed. The requirements to be installed are the Ruby; the Rails framework, a Web Server, and a database system.

There are abundant sources online to start learning Ruby but here are a few recommendations. The initial place to start is learning to program by Christ Pine. Aspirants who desire to have a clear understanding of core programming ideas that can run through this mentioned session. In the same manner “learn Ruby on Rails” by Daniel Kehoe’s, is another session which offers a gentle introduction to Rails. Small parts of Rails are introduced here which assist you in facing tough resources. Rail concepts and ideas can also be learned by checking out the “getting started with Rails” guide.

There are a number of courses that help you learn Ruby programming online where a few suggested courses and their links are given. Some of them are “Ruby tutorial”, “Ruby”, “Learn Ruby for beginners” and “try Ruby.”

The exercise with “try ruby exercise” session of the tutorial is one which makes Ruby beautiful, fun and a simple language to learn. The try ruby website is one of the most suggested websites to get to know the ruby syntax. When “help” is typed in the website it would lead to a 15 min interactive session where the basics of Ruby can be learned. In the same manner, when “help 2” is typed, it would lead you to the next chapter in the online study. Enthusiasts who desire to learn Ruby quickly can use the site and build a strong basic foundation.

In order to start developing with Rails, you require knowing the basics for the same, in that way “Jeffery’s introduction to Rails” can be utilized, which is a 40-minute screencast. When you use this website to learn the basics, the topics included here are the active record, test-driven development, models, generators, partials, Rspec and Capybara and lot more.

To excel and master in Ruby, learning with examples is the best method that can be followed. In that manner “Rails for zombies” is a free as well as an incredible course that must be followed by all programmers. The site offers an interactive session after the tutorial and the learners are to go through many exercises.

For beginners who wanted to learn Ruby on Rails step by step should go in for “Ruby on Rails Tutorial: Learn Rails by example”. Another tutorial like the book which makes understanding of Ruby in a simple manner, can run through “Beginning Rails three”. With all these “The Rails 3 Way” can be used as a reference book which helps learners clear up their doubts if any.

With a complete understanding of the basics, undergoing tutorials and many other books, the learner must now be well-versed about Ruby on Rails and its details. The learner can now test himself by building a simple blog. He can get through the various websites, tutorials and samples to help and create a blog himself.

To be a good programmer, you really need to keep yourself updated regarding the happening of Ruby on Rails, for the same, you need to subscribe in Twitter and many other blogs. Here are a few websites that you can subscribe too in order to enhance your knowledge on Ruby. To get to know tips, screen shots about Ruby, new gems, and practices “Rail casts” is the right website to subscribe. For ones who do not want to watch videos “Asciicasts” is a site that mimics Rail casts in text format. “Nettuts+” is another website that posts useful contents regarding Ruby. More of articles and tutorials can be found on “The Rails Way”. “Riding Rails” is another official Ruby on Rails blog where they mention official releases which are useful for programmers. “Planet Ruby on Rails” is another resource which can be used to check once in a while.

Future of Ruby on Rails:

Ruby on Rails is considered as the best framework for developing web applications. Ruby is mainly used in various sectors where their operations usually navigate online. Ruby on Rails is prominently used across various industries such as retail, manufacturing, e-commerce, education and lot more. With the advancement and popularity of apps, mobile applications are developed with Rails framework which would soon be the main operation. It is a fact that fresh companies and startups have been using Ruby frameworks, even insurance and health sectors are planning to switch over to Rails framework.

Reasons for Ruby to be prominent:

Ruby on Rails has a number of reasons to be famed and has a great future too. In order to test the frameworks, numerous banks and insurance companies are making use of Ruby. The main beneficial aspect of Ruby is that it is flexible when one requires altering or tweaking an application. By this way, the application is also made effective and efficient too. The main reason for usage of the language is that it is used for testing of applications and picks out the one that best works for the infrastructure. Another reason for Ruby to be used in many sectors is that it paves a way for more of innovation. Hence, Ruby on Rails is always in high demand in the future.

The present status is that Ruby on Rails is mainly used in applications as well as online portals. Rails are also utilized for building applications by various enterprises especially for their non-core products, though their core product exists in various other languages including Java. The useful fact of utilizing Ruby on Rails is that it helps in a prompt build up and also allows adding in more features within the application.

Future of Ruby on Rails Developer:

The future path for Ruby on Rails developer is quite clear without hassles. The language is considered as one of the highly developed and demanded language in the IT field. With the growth of online application, Ruby on Rails has been a great source for developing the same. A number of programmers make use of Ruby on Rails for the development of programs. When future of Ruby on Rails is considered, there are a number of recent updates that are being done to the software. Many programmers welcome and make use of the Ruby as the language has simple syntax and easy to learn and adapt. Tutorials are another important feature which makes Learning Ruby from scratch quite easy. Online developers prefer Ruby as the codes may be added with ready-made parts of codes. With such features, an experienced programmer is able to save more time during development.

The mentioned Ruby certification program is specifically for individuals who are programmers and engineers who develop, design and operate Ruby-based applications. Few other individuals who are eligible for this certification are instructors and system proposals. Ones who are certified with this program are identified as skilled Ruby engineers and have an in-depth knowledge of Ruby. Obtaining the certification makes the programmer eligible as they are strong in basics and would be able to work on Ruby-based system development.

Why Ruby on Rails is a demanding language now:

In order to put the productivity of the developer first, ROR was developed. So companies picked ROR in order to iterate their ideas on products and also make use of them in web applications. Being an agile technology for ideal software development, ROR is utilized by most technological companies and also follow agile principles to satisfy the requirements of the customer.

With all the important pointers discussed, any learner who desire to Ruby on Rails from scratch can run through the above pointers and get benefitted. Online sessions and tutorials are also other important aspects that assist fresh learners. Certifications programs and their details are mentioned which is useful in the process of learning.