The possibility of learning Japanese is positive if a learner tries to put his/her 100% into it. Most of the common methods to learn the Japanese language creates some kind of confusion, but there are some techniques which can provide complete fun and excitement. 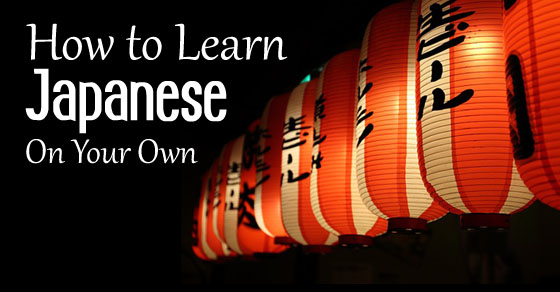 Best Ways to Learn Japanese on your Own:

1. Be around Japanese or listen to most of the Japanese conversation as much as possible:

It seems a little weird to try but trust yourself and give this a try and be around with Japanese people. A person can also start listening to Japanese conversation as much as possible every day to an extent.

Therefore, it would be preferable for a person who wants to be brave in life and try something weird, but yet effective and eventually he/she may start understanding their accent and style when they speak Japanese.

By watching a Japanese news segment every day, a person who is interested in Japanese learning will be more charged to understand the meaning behind the language they speak.

Rather if the classes provide fun based learning techniques then it is possible that a person joining such classes would benefit something from those classes. Japanese can be tricky, but it is a very fun and nice language to learn.

4. Try to practice every day:

Most of the people who learn any new language feels humiliated or embarrassed to speak in front of others, but instead of being embarrassed one can laugh at themselves with others who make fun of Japanese learning.

There may be one of your friends who knows Japanese and they may help you improve your Japanese learning sessions. And it would be a great start if a person tries to speak in bits and pieces with his/her friends to improve their language.

Out of a hundred, there are 10% of people who are really into studying and learning things because they seem to have fun with their learning process and they love learning new things.

Also, some people don’t like to learn much. Therefore, those uninterested people need to be turned interested in. And to make that happen a person needs to understand his/her way of fun. And through that fun way, a person can push in your learning sessions most forcefully.

Taking a small break from learning sessions can improve the learning ability of a person and hence eventually this will create a way where he/she can be better with their Japanese.

And while taking breaks a person can watch Japanese drama, fiction to make himself/herself the value of all the hard work. Therefore, it would be easy to learn Japanese if a person tries to maintain most of his/her lifestyle according to Japanese culture.

It would be better skipping Japanese learning classes for a day if a person is having a bad day and his/her mood is not right. And instead of troubling himself/herself with something boring, a person can start watching something interesting in Japanese.

9. Be casual and polite while speaking Japanese:

Some people who speak Japanese casually may be notified as those people who are not so polite with their elders. Therefore, it would be better if a person who is learning the Japanese language starts learning Japanese formally and politely so that they can handle casual Japanese languages without disrespecting anyone. There are even ways that can help them to be more clear about their speaking ability with others.

Some rules need to be followed while learning languages like avoiding learning Japanese from the movies because there may be a possibility that some of the words in Japanese may sound like something inappropriate in English.

Therefore, it is better to learn Japanese authentically than choosing an easy way. And at the end of the session, a person will be capable of handling any kind of Japanese conversations.

11. It is hard to get songs correct than the language:

Most of the Japanese people prefer playing karaoke in groups and they would love to hear their foreign friends sing a song in Japanese. Therefore, to fit in a Japanese friend circle, a person needs to sing better than speak.

Because people out there love their funniest plays which consist of karaoke. And they would love even better if they get to know that their foreign friends can sing a song in the Japanese and make an effort of fitting in their group.

Joining an activity club of Japanese would make a person be part of their life activity. Through these small steps towards Japanese, a person could understand his/her speaking and learning ability better.

Therefore, it is advisable to be part of the Japanese activity club so that people may start communicating with you and accepting you in the association as the rest of them. This would be the start of big changes in the learning process of the Japanese.

Most of the time happens that people may end up making a mistake in Japanese while using a word in Japanese. It is advisable to use the words in the Japanese naturally.

Therefore, a person who is interested in learning Japanese needs to understand the formation of words in Japanese so that there won’t be any kind of problem that can be faced by the Japanese community because of the wrong usage of words.

After learning Japanese through different sources of learning it is time to read some Japanese stories which can help a person read Japanese in a better manner.

While learning Japanese, if there is anything that you are curious about the meaning about them at that point of time one can take help from google images as it will help a person in understanding the actual meaning of that particular word without any wastage of time and money.

Therefore, it is advisable to know the meaning first before speaking something unnecessary in the public and create trouble for himself/herself.

16. Start taking basics without any help:

In the newspapers and any other magazines, there are some kind of fun games in Japan and a person who started almost can understand the Japanese language basics, and should also start taking those fun games to check whether it is helping them or not.

Therefore, conducting small tests for them to check their credibility in learning the Japanese language will help him/her to understand the actual result of their learning process.

17. Start writing down in flashcards:

Most people prefer learning in writing, whether it is Japanese or any other language. It is one of the best forms of learning Japanese. While learning Japanese, a person can keep writing some of the main sentences so that there won’t be any confusion later.

It would be even better if a person starts writing full sentences in the flashcards for his/her purpose. And after writing it down whenever it is necessary, he/she can check those flashcards for reference while speaking Japanese.

In this developed situations a person can carry his/her Japanese tutor in his/her pockets. Therefore, it is better to download a Japanese learning app to learn more about Japanese.

These Japanese learning apps help a person rectify his/her mistakes in speaking Japanese. It even rectifies any type of meaning change in the Japanese language that a person is conversing with. Therefore, it is one of the easiest forms of learning Japanese.

While writing Japanese, a person needs to understand that whatever he/she is writing needs to be rectified before it troubles anyone else.

It is a good habit of writing the Japanese full sentences, but it would be even better if a person speaking those written English tries to learn the meaning of those sentences and to do that a person should keep on referring some of the Japanese tutors to whom a person can reach anywhere and anytime.

20. Keep reading Japanese with a tune:

Therefore, there are some of the things that need to be followed while learning Japanese on our own without any difficulty. These guidelines are for those people who can try not to give up in the middle while starting their learning process.