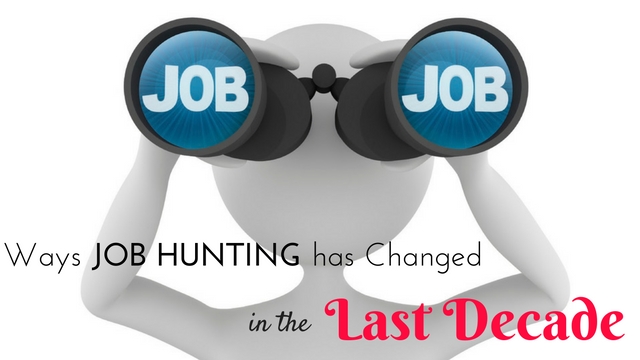 Nowadays getting and keeping a job is a tough task indeed. Once people get jobs they usually hate giving them up because they are well aware of how tough it is to get a job in today’s modern job search market.

Over the past few years there have been many changes which have come about in the business field and it is because of these technological changes, the business world has been able to advance so much.

Business is certainly not restricted to one location or one geographic area, the world has become connected due to technology. If you are wondering how job hunting has changed then given here are the main ways in which job search process has altered over the past.

How Modern Job Search Process Has Changed Over The Past 10 Years?

1. The process of job hunting has become very tough indeed:

First and foremost is the fact that job hunting has become a very difficult thing indeed. People cling on to their jobs even if they hate it simply because going through the process of job hunting is hell.

It is often said that a bird in the hand is worth two in the bush and that is why everyone prefers to cling desperately on to whatever they have.

However in the event of being fired or laid off, people have no other choice but to dive into the job hunting pool with all guns blazing. In today’s times things have changed but having a can do attitude is certainly what is most needed.

2. It has become very time consuming:

Job hunting is a process which has become very time consuming indeed. If you want to bag a good job you will have to look into a lot of things, following only the newspapers will not be enough to help you to get a good job today.

If you are really giving the job hunt, then you need to check online, bulletin boards and even company websites.

The moment you are lazy with your job hunting, a good employment opportunity might slip through your hands leaving you feeling sad, dejected and disappointed in yourself. It is eventually both time and efforts which will help you get what you want.

3. It has become more a task for the youth:

As it has been mentioned above, job hunting is both a time consuming as well as tough job. It requires people to be attentive and constantly at the top of their game.

It is for this reason that nowadays job hunting has become a task which only the younger generation are able to keep up with. Though there maybe exceptions to this, but older people are rarely able to get all with the job hunting process.

In the yesteryears, age was just a number, older people were in fact given a lot more importance. However nowadays with the startup culture, companies like hiring younger people because they will be more willing to bring something new to the table.

4. The internet plays a big part of the job hunting process:

Needless to say that the internet has become a huge part of our lives, most companies are unable to function when the internet is not working.

Previously offices would get a little crowded with so many people coming in for various different reasons.

However nowadays things have become different in the way that so much is being managed as well as handled online. Almost the entire job hunting process has been shifted online and no extraneous applicants are entertained.

5.Having a proper resume was previously a big part of being prepared for your job hunting:

Previously when it came to job hunting having a well written resume was something that was absolutely indispensable. People went from one office to the other with printed or hand written copies of resumes in their files.

However nowadays though the resume is still considered so very vital, online profiles are given much more preference.

Rather than having any ads posted online, companies search for people on their own and check out social media sites for people who they think would be good enough for the job. In this regard, sites like LinkedIn have become very useful.

6. You cannot rely on any ‘Godfather’ nowadays:

Previously people got jobs or got the chance to appear for interviews based on how well they knew the boss. However nowadays things have become very different. There is no place for favoritism like this.

Everything is rather clear owing to the fact that media and journalism have become so powerful.

The moment people get an inkling that there have been some unfair means used by a person in order to get a job, the other individual will immediately head to a media company in order to make the story known.

It is because of this reason that companies keep everything open so that no one can raise fingers at them. That is why nowadays job search has to be done completely on their own, without relying on contacts.

7. Nobody even writes cover letters any more:

Previously if you wanted to bag a job you needed to write a good cover letter as well. Submitting a good resume was not merely enough.

In the cover letter you were required to write very specific things. Nowadays no one has the time to even go through the resume let alone the cover letter. It has become a rather obsolete practice.

Job hunting nowadays does not require you to draft a good cover letter for yourself. Having a good online presence is really the first thing which companies take note of.

8. In today’s job hunting having good recommendations has become a necessity:

In order to make your job hunting a fruitful exercise, nowadays it has become absolutely vital to have good recommendations.

Having any recommendation is not good enough, it is an absolute must to have good recommendations from people who are powerful and well recognized in the business world.

If your recommendations and credentials are not up to the mark then you will never be able to yield positive results from all your job hunting efforts.

Things become so different from what they were even five years ago, but change is something which is indeed a part of life which is constant.

9. The competition is very stiff nowadays:

When it came to job hunting some years ago, there was competition, but there was not much. The main reason for this was because there were hardly any women who were in the corporate field.

Women most often simply became secretaries to bosses who were males or were teachers in schools. They were never really at the helm of things and boss was a term which naturally implied a man.

However nowadays, the tables have turned. There are just as many men in the field as there are women. This is to some extent the reason why the availability of jobs is a bit less, given the fact that women are proving to be so much more capable than they were thought to be.

10. You cannot randomly drop by at an office and expect to be entertained:

Previously if you need a job, as part of your job hunt it was acceptable for you to drop by at an office without any appointment.

It showed that you were someone who dared to be different and were willing to take that extra mile in order to get the job. However nowadays doing such a thing is unheard of.

Even if you do such a thing it will seem like you are someone who has no professional attitude and it is unlikely that anyone will be willing to meet you like this.

Nowadays even if you wish to drop by your resume or to meet someone in the office you need an appointment scheduled in advance. Today time has become the most valuable resource.

11. All employers know exactly what it is that they are looking for:

Job hunting as mentioned above has become more complicated owing to the fact that business men know exactly what they are looking for when they are employing employees on board.

A few years ago, things were just new and employers themselves were not sure of what they were looking for.

Now in the business world everyone is absolutely sure of what they want and they are unwilling to entertaining anyone who is not exactly fitting the job profile.

They prefer to hire people who have knowledge of what they are doing, rather than those who like to sit back and let others take control.

Nowadays job hunting involves a lot of steps and procedure. If you choose to apply for a job there are a number of others things which you have to get ready.

It is very important to have a soft copy of your resume, a hard copy of it and along with your resume you also need a portfolio if possible of all the projects which you have been able to handle in a successful manner.

Previously job hunting just involved finding about a vacancy and making a trip to the company. Nowadays job hunting has changed a lot. Strict rules and procedures need to be maintained..

13. You cannot rely on your educational qualifications alone:

They do care about your education but they care even more about the skills which you have and your level of common sense. They want people who have a hands on approach to work and are genuinely passionate about their career.

It is a well known fact that not all educated people make good employees. Sometimes people who are not very educated have a natural flair for the job and are able to find quick solutions to problems.

Though there are many companies nowadays, the chances of getting a very good job, is extremely low.

Though there have been many startup companies which have become so successful there are an equal number of startups which have failed in a terrible way.

So job hunting now involves a lot of heart break and disappointment given the fact that good job opportunities come so few and far between.

Even if people are putting in their all to try and find a job for themselves, things hardly ever fall perfectly into place,. It is because of this that people are forced to settle for mediocre jobs.

15. You cannot limit yourself to just one location:

The availability of jobs was much more previously that is why job hunting was relatively a much easier task. Because there was so little technology, companies relied a great deal on manual labor to compete all the assignments on time.

Nowadays companies have machines such as computers, printers, fax machines, photo copying machines and even phones.

Previously there was nothing of the sort. So because of the limited number of jobs available nowadays, job hunting is not restricted to the location where the person resides, he or she is forced to send out applications to other states and locations as well.

Rather than trying to complain about how things are different from before, you should try your best in order to embrace the change and keep up with altering times.

If you are unable to keep up with modern times and technological advancements then maybe the business or corporate world is not the place for you. Companies would never like to hire people who are fixed in their ways and unable to adapt themselves to the changing situation.