Every place whether it’s small business or a big one, there is a manager to lead the team. Now their functions are not just being a symbolic head of the organisation, but need to foster proper work environment, motivate the employees, able to transmit information down to other subordinates, be a good communicator, able to deal with unexpected situations, initiate change in work atmosphere, control the use of organisational resources, etc.

But you would have observed that some organisations do have managers who falter. The overall progress seems to be like walking on ice. Everything around seems like there is no vision. All these are symptoms of having a manager who is ineffective in his approach or at work. Let us brief on the aspects of traits of a bad manager that he would be carrying with. 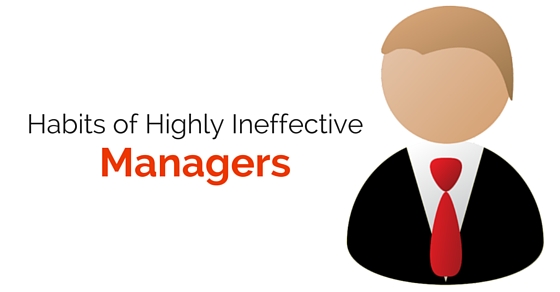 Traits of a Bad Manager or Leader:

This type of attitude is predominant in managers who are not sure about their topic that is being discussed and is under informed on the subject. He / She do not like their ignorance to be surfaced and would generally tend to have people in their group who are worse than them. This is to keep themselves safe. They often tend to ignore the talented people to show that they are brainier than the others. Ultimately, an idea that would allow for progress would not be taken up as it may seem to jeopardise their position. Hence, the discussions are mostly carried out in an environment that is not well informed.

Such bosses feel that they need to have control on their employees by snooping into their work activities. It includes monitoring their web traffic, emails, messages, social network sites where they feel that they would be able to catch them making them feel that they are disloyal. Little do they know that this would only create a paranoia making them to be even more secretive about their dealings. The employees would lose their trust and confidence on such bosses.

Hoping to create an environment of competitiveness within the team, sometimes managers trigger internal conflicts inside teams. They mostly spur conflicts within individuals or teams making them look at each other with resentment and pique. Instead of considering competitiveness with an outside firm the employees fight within themselves and lose their ‘team’ spirit. Thereby their performances get squashed in front of their competitor.

There are many IT firms who show their technological splendour to each type of work. Sometimes these manager would believe that technology is capable of solving all the issues without paying heed to the remarks and suggestions from his talented team. Without bothering on the pros and cons of the IT products, they tend to approve anything believing that it would make their employees more productive. Such managers are considered ineffective. A wise manager would be sceptical to spend the company’s financial resources on IT related products and allows employees to be selective in their use of such products.

6. Does not adopt changes:

When there is a need to make necessary change to have a better outcome, ineffective manager would not make the changes as they feel it would jeopardize their position. They wait for the last moment or a situation to happen to make the change. They are not aware that changes are sometimes good for the organisation and employees must learn to adapt to the change.
They like to stick to the same format and same style without knowing that there are many changes that are happening around.

Have you seen a delegation of authority in your internal mail box when your manager goes on leave? What does it say? Does he delegate his functions split within the team members or does he inform to contact him on the mail ID / telephone number? If you get the first type of mail, then your manager is a strong boss, but if you are receiving the second type then you are having an ineffective manager. The second type of manager makes the employees feel that he is very important for the company functions and make believe that he is essential asset.

Some managers do not explain what they require or what the requirements of the project are explicitly. In such cases, the employees are always drawn to this table to get clarifications on each and every aspect making him /her feel that they are the ones who are running the show. This way it is sure to slow down the project and not allow ideas to work. Projects could get delayed or slowed down due to ineffective managers like this. Being clear and explicit in their remarks will help employees to make quick progress and managers can intervene when needed only.

When asked to make a comment on a specific note, ineffective managers do not make themselves to stand on one point. They seem to ponder over the aspect or try to make a general remark saying that they are not sure about it. This indecisiveness will show that he /she do not believe in the themselves. Sometimes it could result in halting a work or assignment, causing delays when they are looking into the details or making exhaustive analysis.

Every team would have good performers and non-performers. It is the duty of a manger to identify non-performers and segregate them so that it does not make the other team members drag them along. This would ultimately create resentment within the team. They do not take decision of cutting them out of their team as even with proper training or coaching, it would not help in proper execution of the project.

You would have heard the word ‘taking the credit from my work’. Well this holds true for individuals who colours the work done by others with little of management words and showcase in front during the end of the project. They do not understand that they need to recognise the individuals who have worked hard for it. Instead of concentrating on resolving conflicts and coaching individuals they are always on lookout to see that their name comes in the forefront of all the work that is done under his authority.

Most of the work that needs to be executed is based on the understanding between the employee and the manager. If the manager does not keep up the word after completion of the work assignment, then employee is sure to lose his /her trust and would not co-operate during the next work assignment. This would ultimately diminish the quality of work.

To make others feel that he/she as manager is in control of the work, they have tendency to ridicule their subordinates often in front of other members. This is because they themselves are unsure of their capability. They do not understand or realise that such a gesture would hurt the employees morale and alienate them. The manager is surely not going to get any sort of cooperation from him /her further.

Some managers think that by talking out more personally with employees they build a good relationship with them. That might not be bad but if that specific privacy border is crossed, then it makes the employee feel uncomfortable and they tend to become unresponsive later on.

Any work when being executed needs to be given feedback to know whether it is being done the right way or not. If a positive feedback is not given at the right time, the best of the employees will lose their brilliance and charm. They consider that management is not recognising their work and appreciating for their hard work.

Ineffective managers are the ones who are afraid of their subordinates overtaking them and getting recognition. They often allow them to access sensitive information to get their answers but not allow them to forward it without their approval. The employees are not given ownership to the work thereby decreasing the productivity.

17. Not listening to problems:

These managers do not allocate time to listen to their subordinates problems. This makes the employees feel more frustrated and insecure. When the problems goes unattended, productivity stagnates. Such ineffective managers feel that employees are there to execute the work and not talk about it.

Often it is observed that ineffective managers are not sure on how to bring in discipline within the team. They being unsure of enforcing discipline, tend to foster unruly and unproductive behaviour within team. In other words we can say that an employee is allowed to continue with his /her poor behaviour due to inaction from the manager. Such negligence would impact the whole team and anger the other members.