An individual, who is looking to make it big in life, will likely want to grow and move ahead in life. Though many start of at the grass root level they slowly but surely move up in life, by virtue of their hard work and diligence. If you are someone who harbors this dream of making the transition from a co worker to a manager, then you must be willing to put in a lot of hard work as something like this is never going to come easy. To help you along the way you can follow these tips to guide you on how to make the transition from a co worker to a manager without much trouble. 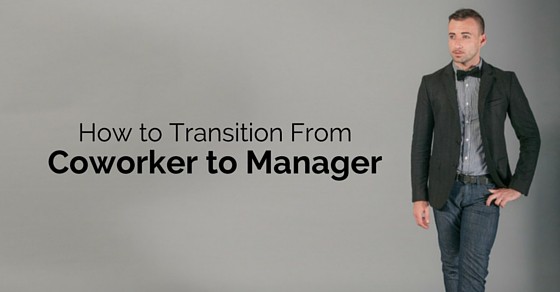 Going From a Co-Worker to a Boss:

1. Think about the kind of manager which you would like to be:

Before you take any action, go about talking to anyone. It is important that you sit down alone with yourself and decide about the kind of manager you would like to be. You should ensure that you know properly every aspect of what your job is and all that is expected of you. If you know what you need to do, you should follow everything to the best of your ability. Always act in a manner keeping in mind the best interests of your company as well as the people working under you. So try your best to do maximum justice to the responsibility which has been bestowed upon you.

2. Gather your co workers and have a talk with them:

In addition to you being confused yourself about how things are going to transpire now, your employees must be wondering themselves about how they are to behave with you. One of the best things to do in this situation is have a good talk with them. You can talk to them as a group or individually according to what you think is most fit. You must make it a point to mention that things are going to change a little bit, but you will only be trying your best to take the company to new levels of success. You will never let your own selfish interests come into play at any point and nor will you act in an arbitrary manner.

3. Continue to maintain a friendly relationship outside the office:

A great way to show that you have not let your newly come promotion get to your head, is to continue to maintain friendships with your old co workers, outside the office. However doing something like this is easier said than done. Many times because of this transition from co worker to manager, many relationships get strained and many friends turn enemies. A friend who is happy for your success will constantly try to make things easier for you, rather than trying to make things more complex. So do not fret about someone who is deliberately trying to make things tough for you, maybe he or she was not even your friend to begin with!

4. Continuously act in a fair and just manner:

In order to avoid any kinds of conflict with your previous co workers and to make your transition very smoothly, what you ought to do is constantly act by the book and according to the rules. Acting according to the rules is the best thing to do as then no one can challenge your decisions as they will know that they are doing what you have to do, as opposed to what you want to do. It is said that ‘With great power comes great responsibility’ so you must ensure that you use your authority in a proper manner and constantly let your conscience be your guide at all points in time.

5. Always act in a manner becoming of someone in your position:

Just because of the old relationships which you shared with your old co workers that does not mean that you let those things get to you and start making up your own rules to keep them happy or to show them that you are still the same. It is important for you to remember that this responsibility and honor has been given to you because the higher authority in the company respects you. They have made you the manager because they believe that you will be able to make this transition in a smooth manner. If you show that you are unable to make the change they are likely to remove you from the post.

6. Do not try to gain points for being popular:

As mentioned above it is important that you act in a manner which is expected of someone in your position. But more important is that you should not be making concessions for your previous co workers to become popular. What you must remember is that this is your career on the line and you should not let anything put your success in jeopardy. It is always important to have your own interests at heart and not blow the opportunity which has been handed to you on a silver platter. Chances like this don’t come along often and when they do, you have to grab them with both hands and make the most of it.

7. Do not suddenly change your attitude towards them:

One of the worst things which you can do when making this transition from a co worker to a manager is suddenly changing your attitude towards people you once called your friends and acting in a high handed manner. No doubt a manager is meant to have a certain charisma and dignity about him, but that does not mean that you start treating your employees as subordinates over night. Be a manager who stands by his people no matter what, but continues to be stern when needs be. So rather than trying to be either too stern or too friendly, just attempt to strike a fair balance.

8. Do not favor anyone who was your best friend:

Becoming a manager does not mean that you can now make some concessions for your best friend and let him get away with doing less work or not respecting deadlines. The moment you do something like this, not only will it reflect badly on your friend, but it is going to reflect even worse on you. The moment you start favoring one employee that is not going to be taken by the others who are working for you. When they start acting rebelliously against you or lose their respect for you, then things are just going to fall apart right before your very eyes. So make it a point to tell your best friend that he has to respect you in the office.

9. Get some training on how you should make the transition:

When you become a manager, things might be a little tough for you. You will obviously be feeling great joy and pride in your heart, yet at the same time you might be wondering whether things are going to get tough at the office for you. So rather than trying to figure it all out on your own, you can try to seek out some help from the human resource department or even receive some training which can go a long way in guiding you along the right part and helping you make the transition from being a co worker to being a manager who is expected to be commanding.

10. Do not be shy to make the transition no matter what:

11. Remember you too were once in their shoes:

As mentioned above it is important that you act in a manner which the boss expects you to act in, but in addition to this you should strive to act in a manner which your employees would also like you to act in. What you need to keep in mind is that, once upon a time, not too long ago you too were in their shoes and had certain expectations from your manager. If you keep your own ideals in mind at all times and act accordingly then everything is going to be alright. If you have a tarnish free image, then no one will be able to point a finger, saying anything against you.

12. Take decisions keeping everyone in mind:

When making this transition it would advisable for you to take decisions keeping in mind the needs of everyone and being sensitive to the needs of all your employees as after all they are your responsibility. If you constantly strive to keep them happy then they are going to always remember having a good manager like you and they are going to try their best to keep intact the high expectations which you have from them. A transition from a co worker to a manager is one which many people have had to make in the course of their career, so you need not worry about anything. Sooner or later things are bound to fall into place without any trouble. The troublemakers just have to be identified and dealt with in a proper manner.

13. Consult with all, but let the final decision be your own:

When making this transition the best thing which you can do is take advice and suggestions from all who work under you. Doing this is very democratic and shows that you respect all your employees enough to ask for their opinion. Yet this being stated do not let your old co workers pressurize you to take some decisions or do something which you know that you ought not to do. So use your own expertise and always let the final decision be your own so that no one thinks that you are someone who is incapable of following the dictates of your own heart and mind.

14. Remember to still be yourself:

You must ensure that you don’t become a new person altogether, you must remember to be yourself and let your personality remain intact. No matter what you happen to achieve in life, you must continue to constantly be rooted and never let your ego or pride get the better of you as that is sure to bring about your downfall.

15. It is now time to build a new kind of relationship with them:

Finally rather than trying hard to maintain your old relationships try your best to make and maintain new relationships and dynamics with those working for you now. Holding on to the past is not something which is very ideal to do, especially in the corporate world.

Trying and wanting to make this transition from a simple co worker to the manager is not going to be a simplistic thing to do. There are going to be many hurdles and obstacles which you must be prepared to deal with. The primary problem about making this transition is that people are going to see you in a different light now. Some people’s attitude might change towards you for the better and some might change for the worst. But as long as you act as a good, just and fair manager no one will have any problems or grievances against you. If you act high handed and superior then people might be disappointed in you.