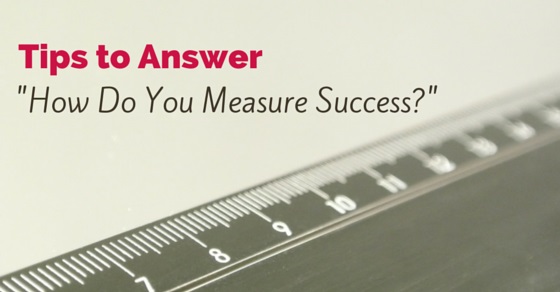 Success is something that everyone in any career field would like to achieve. Success may mean different things to different people. Interviews are indeed daunting but if you want to bag the job you must make sure that you try at any cost to do your best and answer all questions asked to the best of your ability. In the event of being asked the questions ‘How do you measure success?’ You can make use of these helpful interview guide and tips. How to Answer the Interview Question “How do you Measure Success”:

1. Define success according to you:

When asked a question like this it would benefit you to begin by stating, what success means to you, how do you define success. For a question like this there are no wrong or right answers in particular. But based on what you say, the interviewer can get an insight into just how well you are able to think of answers and communicate them in a coherent manner. So rather than trying to sound erudite you should always just speak from your heart and put forth thoughts which you really believe and stand by.

2. Put forth your general ideas on the topic of success:

In the event of being asked this question, you could say that you believe that success is something you do not think can be entirely achieved. Once people gain success in some form, they try and formulate new goals for themselves no matter what age they are. When you give an intellectual answer like this you silently communicate to the interviewer that you do in fact have a philosophical bend of mind. Even though you have entered into the business world

3. Success to you is not about someone’s material possessions:

If you are asked this question then it would benefit you to say that you do not think success is measured in terms of how much money an individual has made or how many worldly pleasures he is able to enjoy. If you give an answer like this you might do so at the risk of coming across as superficial and money hungry. Equating success with wealth is something which is absolutely banal and having such a mindset in general is not a good thing at all.

4. You measure success by someone’s knowledge in a field:

When you answer this question you must make it a point to silently communicate to the interviewers, that you to strive for success but success to you have nothing to do with the acquisition of wealth, rather, for you success is equivalent to the amount of knowledge an individual has been able to gain in his particular field of expertise. An answer like this could really impress the interviewers and show them that you value knowledge above all else, and this is a quality rare to find.

5. Determine your success in terms of how accomplished one feels:

Success is something that there is no particular way to measure. Rather than having someone else gauge how successful you are, success is something that can only be measured by how one feels personally. At the end of the day we should not try to live our lives based on the rules and regulations which other individuals have formulated for us. If what we have achieved is in keeping with our meaning of success, then that is it, case closed.

6. To you measure of success is how well someone takes care of his or her family:

One of the most important things in life is family; our family is often the only individuals that are willing to stand by us in thick and thin. It is in the nature of people to gauge success in terms of how well a particular person is able to take care and provide for his or her family. If you are someone who adheres to this view as well, then you can incorporate your view into your answer and say that family is most important to you and this is, how to measure success according to you.

7. Success to you may be measured in the lives a person has been able to touch:

Rather than adhering to the conventional ways of measuring success, there are many individuals that define success in terms of how much an individual is able to touch the lives of others. If a man no matter how poor is able to help and assist in many unassuming ways then according to you that is a successful man as above everything else he has decided to put the needs of his fellow human being before his very own and that according to you is commendable.

8. Success to you may be measured by how proud one has made his/her parents:

9. One’s personal legacy can be the means to measure success:

Success is often measured in terms of the legacy an individual has been able to leave behind for the future generations. This legacy may be in the form of opening a school, doing something for the first time or implementing a revolutionary rule. All these things serve as precedents for the future generations to attempt to live up to as well. Such a person may not have made a lot of money or had a big house to call his own but through his work he has been able to impact the lives of many in a positive way.

10. Say that those who strive for excellence do not have time to sit and measure success:

Rather than thinking of different ways to measure success you could always give a usual answer by saying that you are not one to sit and measure success you would rather spend your time doing positive work that would help in advancing your career and building a name for yourself. An answer like this is novel however make sure that you do not speak in a manner that makes you come across to the interviewer as being smug or complacent as that is something unacceptable.

11. Try to come up with something unconventional:

Rather than looking up the internet and reading up about answers which you can give to a question like this, it would be better if you spend some quiet moments in thought and try to come up with novel answers of your own. If you give an answer straight off the internet, chances are you will be caught by the veteran interviewer. So it is always advisable to be as original as you can when coming up with an answer, rather than providing an answer which you have not thought of on your own.

12. Say if measured in how many head one is able to turn on entering a room:

A great approach to this question is by saying that, according to you success can be measured in terms of how many heads one is able to turn when he or she enters a room. In addition to simply giving your answer, one thing you can say is that you too would like to be someone that is able to turn a lot of heads simply by entering a room. Successfully people are most often than not individuals with a lot of charisma as well.

13. You respect that success has different meanings for everyone:

You could conclude your answer by stating that you respect that all individuals have different ways of meaning success. However at the same time you make it a point to chase after your idea of success so that even when you are no longer on the earth, people can remember you as someone who has made something of his life and done his bit to help others in need.

14. The interviewer wants to gauge how ambitious you are:

Very often when an interviewer asks this question, it is just another way of finding out how ambitious you actually are as an individual. If you are ambitious and wish to climb the ladder of success chances are that you have spent a lot of time thinking about how success can be gauged. Remember that ambitious people are the ones companies love to hire, because they have the maximum drive within them. They try to chase after victory at all cost.

So these are some of the best ways in which you can answer the question if you are happened to be asked it during an interview. No matter what question is asked to you, you should try your level best to speak in a professional and confident manner. Most of the time, it hardly matters what the question is, if you are able to answer in a coherent and comprehensive manner, then that itself is half the battle won. All you need to do is have faith in your ability!