An official working area is a place where an employer or employee comes to work on their assigned duties accordingly. Sometimes there will be some situations when a person reacts to certain matters in a different manner that may result against of their actions. 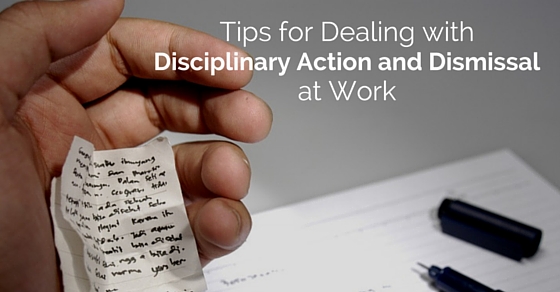 This can be a very common issue to take certain action against. There may be situations in the office when an employee behavior against his / her fellow workmates and other superior authority differs slightly.

Sometimes there may be a possibility of a difference between a team and it may turn in an ugly fight. At that point of time an employer can take some disciplinary action against those employees. If the behavioral issues continues of that particular employee then there may a possibility of dismissal of the work.

An employer can act according to the duties assigned to him/ her in which case he/she can notify an employee being absent during a period of time and then after that this kind of absenteeism continues, finally an employer can take a disciplinary procedure of dismissal from his / her work.

When an employee performance is not to the level of expectation, an employer can notify him/her about his / her mistakes in certain places. And even after that, an employee keeps lowering in his / her work delivery then this would turn things to a disciplinary level of action. An employer can take action over the employee’s poor performance in office and that disciplinary action can be treated as valid one.

Disciplinary and Grievance Procedure and Guidelines:

To follow a proper procedure of dismissal, an employer needs to know the employer rights and duties of dismissing that particular employee. There should be no room for a mistake while going through these dismissal procedures because any kind of mistake can turn things in the favor of the dismissing employees as they too have certain employee rights.

1. Sending a letter to relevant employee:

After making all the points about dismissing a particular employee from his / her duties, an employer needs to send a letter to the relevant employee stating all the details of the complaint filed against him/ her which is considered as a violation company rule.

By sending a dismissal letter stating all the reason for his / her dismissal can make things better for that particular employee and as well as for the employer.

2. Arranging a meeting with that particular employee:

After receiving the disciplinary letter from the employer stating all the complaints against one leading to a dismissal of his/her duties. An employer can arrange a meeting with that particular employee so that the reasons provided for his / her dismissal should be discussed clearly.

And needs to hear his / her side of the story before taking any kind of action employer against him/her. By following certain rules an employee at work that can be saved from certain monetary charges against him/ her.

If an employee doesn’t agree with the allegation forced on him/her, one can always appeal a higher authority to look into his / her matter without any bias situations. An employee who is being dismissed of his / her duties rendered to the company can write an appeal letter to the higher authority to discuss the difference of allegation between an employer and the employee. By appealing for a chance to prove all the complaints against him/ her is null and void.

When arguments between an employer and the employee doesn’t get resolved and they keep arguing about their stand on that dismissal matter, at that point of time those two people need to get a third party for communication so that there will be an end of the discussion with an unbiased and fair note. An inter-mediator should be fair enough for both of them. Bringing an intermediate between two people can help them come to a conclusion state.

Even after a long discussion over dismissal matter, when an employee disagrees with the complaints charged against and refuse to accept the dismissal of his/ her duties, a better solution is to claim a disagreement between both the parties. By claiming a disagreement between both of the parties can make them come to a compromise state where they can negotiate their part of the story in certain terms accordingly to their favor.

Disciplinary Meetings or Hearings with Employees:

1. The way of disciplinary action taken:

2. Claim for a valid evidence:

3. Claiming the evidence as null or void:

4. Bring up previous behavior of an employer:

5. Present evidence proving your side of the story:

An employee who has taken a hearing for his / her issue within the office needs to be prepared with the evidence proving oneself correct. By denying the proof presented by the employer as void or null, an employee earns a chance to present his / her side of evidence proving he/she is being framed or not guilty of the charges. This can be considered as the trump card of the hearing or meeting.

Common Disciplinary Mistakes made by Employers:

An employer needs to be very clear about the action he/she is taking against an employee. There are certain common mistakes of an employer which is considered as a wrong move towards disciplinary action and they are as follows.

1. By not warning an employee about the consequences of the disciplinary actions:

An employee always takes the warning of their employers very casually, as it won’t affect them in a negative manner. To make the employees work according to the company policy, an employer needs to explain all the employees the consequences of such disciplinary actions which can be taken against them, if any violation of company rules or damage of company property is done, by sending a warning letter to the employee.

2. By not explaining the employer the reason for his / her dismissal:

An employer needs to take a disciplinary action against a certain employee, who keeps breaking company policy. By taking such disciplinary dismissal of work, an employer makes it clear to the employees all the complaints against him/ her which are considered as a violation of company rules or regulations. By following this step, an employer will not accuse of being unfair towards accusing employee.

3. By taking disciplinary action without any valid evidence:

4. By not allowing the employee to be accompanied by another person:

According to the company rules and regulations, an employee can only accompany by those people who can be treated as a lawyer or government agency official who is taking a case against the company. A government official or a lawyer can be allowed to be accompanied by the accused employee. If an employer doesn’t allow such government official then there will be a break of company employment contract with that particular employee which stated in favor of his / her security.