Inattentiveness in anything can lead to a catastrophe situation. One small mistake can lead to unrecoverable damage.

In an organization it is very important to work in proper and care full manner because even a small negligence there can cause a lifetime suffering to both company and the employee.

As a personification: Suppose in a food factory, some employee’s duty is in frying section and due to some reason he/she goes to attend some other work and forgets about lowering the frying temperature and when he returns, the damage already has happened.

So this is what heedlessness can lead to. So, mentioned here clearly that, can an employer sue an employee for negligence or not?. 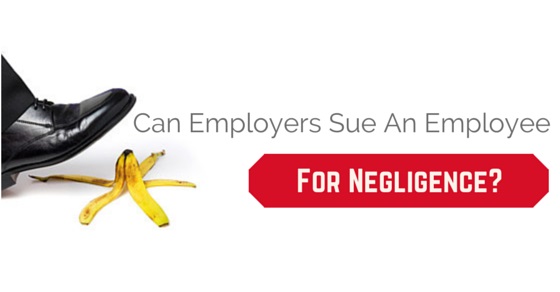 This always is not the case that only the head can sue his employee but it happens the other way too.

In situations of ignorance the employee can file for a complaint or legal claim against the person for violating or failing to protect the rights in either case. The company can claim the damages in the following cases:

In the above-given example that is suppose in a food factory, some employee’s duty is in frying section and due to some reason he/she goes to attend some other work and forgets about lowering the frying temperature and when he returns the damage already has happened.

There surely is a negligence but this cannot be termed as a beyond mere ignorance, in such case, there is no issue of suing an employee as there were no extreme damages. Though it is reasonable for an employer to work with great care and attention.

Moreover property damage is something a big issue and in such cases where the damage occurred is high, can be considered as a situation for prosecuting the employee. Now this too can be explained with a better example:

Suppose in a shares company the employee fails to sell his shares which might include the money of other people, in such cases of extreme property damages the employee can be sued.

There is always need of a required reason for the resignation. If only the person is unable to clarify his terms for what he or she is quitting or in other case why is the employee being fired from the job then this again can be a case of negligence.

Before issuing a notice it is cleared by the government that the employer should be given time for finding a replacement before resignation.

3) Suing for breaching of contract:

It is very often that data breaches are caused by negligent employees.Breach of contract is a legal cause of action in which a binding agreement or bargained for exchange is not honored by one or more of the parties to the contract by non performance or interference with other party’s performance (taken from Wikipedia).

In other words any one sharing the work of the company with the other companies and disclosing the project work in order to gain profit can be sued for rupturing.

So the work in the company should be done by keeping an eye on each and everyone and trying best to keep the work between the four walls before launching it.

It is very often that data breaches are caused by negligent employees.

4) Breach of duty of fidelity:

Duty of fidelity means that the employee should be truthfull to his employer and should discuss each and every minute detail of his business or work with the employer.

By breaching of duty of fidelity means that if an employee is not sharing the proper details of his work and is not sharing a good faith then in such case the employee is competing in an unfair manner and earning profits by enacting improper activities.

For small damages it has been stated that:
1) The employee is not answerable to small negligence’s.
2) Suing a person for small damages is totally unfair or unjustified.
3) In such cases the employee can only be more care full the next time to avoid the ignorance for the second time.

The other reasons can include:

It is sad to say but workplace harassment is second most common problem in organizations and it can be done by a co-worker or an executive or a client or a contract employee.

Also it is not only the victim who can file a complaint but the other employees too can prosecute for the same if they knew about the situation but the employee was ignoring the same which means a negligence was there in the organization.

Well this is a big problem and in these cases the culprits need to be identified and sued as soon as possible.

According to CIVIL RIGHTS ACT discrimination in workplace is counted as violation in several states and this problem is considered as the first common reasons in a company regarding ignorance.

This happens in almost every second company. No organization can do injustice with the employees on the basis of caste, religion and sex.

The EMPLOYMENT OPPORTUNITY COMMISION helps in providing employees with the sources to file a discrimination lawsuit against any co- worker of the company who practices the same.

The wrongful termination means firing the employee without any strong reason or for unnecessary cause.

For example: The executive fires his employee for the latter had filed a complaint against him or her in the higher organization. In such cases the victim can collect his compensation in severe situation such as lost wages or for any other.

For firing any employee there need to be a solid and sensible reason for it, also as stated earlier ,the employee should be given specific time for his replacement before his quitting or firing from the job.

This can be better explained with the epitome: Suppose a worker is working for more than 48 hours continuously and the next day he is again told to report to the office as soon as possible and without giving him any time for rest, in other words the employee is being exploited in terms of making him overwork.

Well then in this case too the executive can be sued. Sometimes some organizations don’t work according to the rules and regulations, and then even in this case if the employee has to work for longer time then he or she should be given a proper break so that they can continue further without any effect to their health.

In a case of injury at work the employee should be co-operated with disability management where the work can be done from home when the person is ill or disabled to work.

Well, stealing in a company does not mean pick pocketing things but it means way more than that.

Sometimes in an organization, when there comes a jealousy factor, the employees start stealing the work of other employees which include clients, projects, assignment and many more.

According to the old saying that “dog biting a person is never news but a person biting a dog is sensational news” this same is applied in an organization.

Most of the time the executive is the person against whom the actions are taken ,for some are shocking reasons and some are common reasons ,but still it is a big news .Basically negligence results in damages which sometimes are not that much but times too big.

If a person is working then he or she needs to work according to the rules and regulations of the office and for those who violate them, have been made some lawsuits which in any case are applied on them.

HONESTY IS THE BEST POLICY and working with the same thinking is the best way to keep the lawsuits away .Also working with patience and great responsibility and attention can give the employers no chance to sue.