At some point of time in our lives or the other, all of us have been guilty of lying on our resume. This having been said, not merely do individuals lie on their resumes but they also lie a lot during their interviews. Nowadays good jobs are hard to find and people are always willing to go the extra mile just so that they can get an edge over the other applicants. If you are someone who has lied in the interview, you need not be ashamed, it is something that is often done. 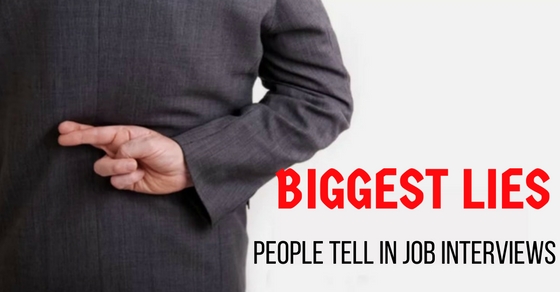 Given here are some of the biggest lies which people tell during their interview, just so that they are able to bag the job:

All companies love hiring people who are always willing to try out new things. They dislike those people who are very fixed in their ways and are very unwilling to accept change with open arms. It is for this reason that in the course of their interview, people are prompted to tell lies and attempt to convince the interviewer that they are better than they really are. The bigger lie you tell, the bigger the risk you put yourself under. So even if you are someone who does not like trying your hand at new things, you should try to make yourself more open and receptive.

2. “I am a very people friendly person”

In order to do well in a professional environment, all employees need to be people friendly as well as accommodating. Nowadays all employees are expected to be people friendly simply because they interact with a lot of clients. Keeping clients happy is one of the major task of employees and if employees are not approachable, they sooner than later will prove to be a real liability to the company. This is another big lie which many candidates tell during the interview, because they know that this is an ability which is truly much sought after. People friendly individuals will be able to attract more clients and make more money.

3. “I have many leadership skills”

When hiring new employees onboard, companies are always on the lookout for various skills. Of all the skills which employers are looking for, the most important skill is leadership skills. Companies dislike having people on board who are shy and unable to say what is on their mind. Those who have leadership skills are always willing to try and salvage a problematic situation or they do their best to take control when things go wrong. That is why a big lie which many people tell is that they say that they have exceptional leadership skills, even when they do not.

Delivering top quality work is something which is expected out of all employees, those employees who fail to do well in all projects usually never climb that ladder of success. Delivering top quality work is the expectation which is kept, yet many people are unable to always excel in all projects. However in order to just get the job, many people lie and say that they are people who are very hardworking and never fail to always give up exceptional work. This is so that they give the impression that they are perfectionists and never disappoint those who expect so much of them.

One of the biggest lies which people tell during their interview is that, they say that they never work for praise or acknowledgment. This is obviously a lie given a fact that all human beings love to be appreciated for the hard work which they have put into a task. Anyone who says that they hate getting praise and they hate being noticed is obviously a lie. It is usually ambitious people who secretly want to be noticed but will say that they hate doing things for attention. This is nonetheless a big lie, yet its nature is pretty harmless.

6. “I always take correction in my stride”

After working long and hard over a project, who likes to take correction and suggestions? No one. Irrespective of what we say, we always hope that people love our work and whenever anyone says anything against it, we cringe a little on the inside, but none the less pretend to be okay with it on the outside. Anyone who openly gets annoyed with irritation and correction will later surely be called immature. In the course of an interview many people lie by saying that they love correction and love it when people give them feedback.

7. “I think that I fit the job description just perfectly”

Though we live in the age of technology where we can find any piece of information, simply by the click of a button, still there are many companies which prefer to advertise about job openings in the news paper simply because they feel that more people will read it. Sometimes even the biggest of companies do not maintain a proper and informative website. So based on these job descriptions people come and interview for the position. A big lie individuals tell is that they think that they are perfect for the job and that they would surely prove to be a great asset to the company if given a chance.

8. “I am constantly thinking of ways to improve in my work”

9. “I am very passionate about what I do”

In order to really impress the interviewers many people start off by talking about how passionate they are about the work which they do and the field which they are working in. They say this, even though, most often they feel that they have a dead end job. Companies are waiting to hire people who are brimming with passion just so that they will be able to take the company to new places. Unenthusiastic people do not have the drive required to make it big.

One of the biggest lies which people tell at the interview is that they love staying busy and that the more work they have the happier they are. This is something which is so obviously a lie, simply because when people have too much work on their plate rather than feeling happy, they feel burdened and stressed out. This is just something which people feel necessary to say so that they are able to establish in clear terms that they would be willing to put a lot of effort into the job.

12. “I love taking up additional responsibility”

Candidates when appearing for an interview want to get across the point that they would prove to be very valuable in the company and that is why they often tell a lie by saying that they love taking up additional responsibility. Irrespective of what people say during an interview, no one likes taking up responsibility. People usually just prefer to do the bare minimum which is required to scrape through and then head home happily. Most people have the logic that whether they do lots or little, how does it matter, their salary is going to remain constant none the less.

This is a big lie which is often told. However one of the worst parts about telling this lie is that if there is anything suspicious about what you say then chances are that the interviewer is going to check with your previous company and validate all the details which you have given. Recruiters are individuals who have a number of contacts and finding such information will not be tough for them at all. Saying such things about your previous place of work is simply unacceptable and your future company will not stand for it either.

14. “I never get involved in office gossip”

There are many people who have the habit of gossiping. Such individuals just wait for an opportunity to talk ill of others and to spread vile rumors. Indulging in such gossip is very immature and childish, however sadly it is something which almost all of us take part in. This is certainly one of the biggest lies which people state in the course of the interview just so that the concerned recruiter gets the impression that the individual is someone who is mature and not interested in petty things such as gossip.

In the modern generation almost all young people are very well acquainted with technology. It is usually the older workers who are not very good with using technology. That is why they usually have to tell this lie and say that they are tech friendly, so that they are not at a disadvantage to the younger candidates applying for the job. To help employees in their job almost all companies have invested in high tech gadgets and devices and that is why they expect all their employees to be able to use it in a proper manner and exploit the resources to the maximum.

This is surely one of the biggest lie that all candidates say simply because they want to silently communicate to the interviewer that they are mentally prepared for the fact that handling the job will not be easy at all. Most people in actual fact hate a job which is too challenging simply because it is very tiring both physically and mentally.

17. “Pressure brings out the best in me”

This is certainly a big lie which is told simply because for almost everyone excess pressure can bring out the best in someone once or twice, but continuously it just causes one to feel highly burdened and helpless. The less the pressure, the happier people are and that is something which has been psychologically proven.

These are some of the biggest lies that people most often than not tell in the course of an interview. During the interview, you may be nervous yet none the less, you should try your best to focus on the questions which are being asked so that you do not make a fool out of yourself. While telling these lies you must ensure that you do not go overboard. If you get the job and are unable to deliver on the claims which you have made, you might end up being fired. Rest assured that some things you say will be double checked at a later point in time, so try avoid lying as much as possible.