It is very difficult and risky to lie to the boss and one should not cater for it as it can land you in trouble, but in case you have some urgent piece of work and you are sure you will not get a leave, you will have to go this way of adopting a lie, but chances of getting caught also increases to a good level, so in that situation one must adopt the following measures: 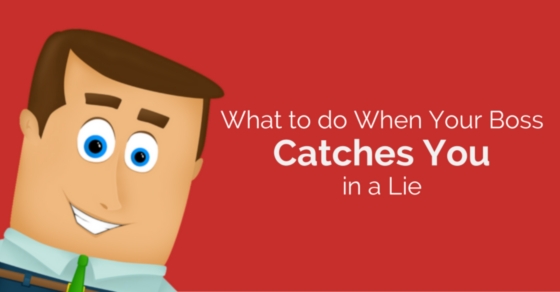 What to do when your Boss Catches you in a Lie?

After you are done with your purpose or while you are doing and get caught, you may get a call from the boss for being answerable of telling a lie. In that situation you must not deny that you lied, instead agree to the mistake you did and apologize for it.

Assure the boss that you will not lie from the very next time and will remain true to him or her.

2. Do not extend the limit lies:

Even if you have lied to your boss, that’s ok, but do not try and extend that lie as it will do no good to you and will spoil your image if you get caught. Whenever the boss catches you, it is going to be a tempting experience to get yourself out of that awkward situation.

For example, in the case of asking for a long lunch, you may have to meet a friend after a long time, and in order to spend maximum time with a friend, you take support of the long lunch. Do not extend the lie or it will create a deeper hole and will turn the things worse for you.

Now the question may arise that, will your explanation give a hundred percent excuse to you? No, this certainly will not happen, but yes it will add a human element to the situation and will help your boss to see the similar situation from your perspective or eyes.

You know very well you made a mistake and if you are caught, then it will be better to accept your mistake easily. It will assist you in bringing back the good image in the mind of the boss.

Indeed, it is very difficult to maintain the good image and even more difficult to resurrect the deteriorating image. So, if you want to build up the similar image again, accept your mistake without any know how or argument.

5. Do not argue with the boss:

The bosses are smart enough at catching the lie of an individual, so if you are caught red handed, do not argue with him or her, after all it can put your years of hard work at stake. Just agree with what the boss says. Yes, you will have to do yes, even if the boss says it is night during the day.

Your body language should now be a little stout to show you are sorry about what you did. Do not stand erect showcasing your ego.

Give a went to ego as this is the time when you have to bend before the boss to ask for the sorry and even if you will have to work one hour extra, kindly do that, as it will probably save your image from being negative in his or her mind.

7. Tell about your immediate plans to the boss:

Along with giving the explanation, tell the boss about the immediate plans that you have regarding the work. Here at this point of time the issue must be addressed as quickly as possible by telling the boss about your next plans and also the time frame whenever it will take place or start.

Speak softly to the boss while you are apologizing for the mistake you did. Do not have a loud tone of speaking. Be soft spoken and nod your head with everything your boss says. It will create a good impression in the mind of the boss.

9. Clear the air regarding the misunderstanding:

10. React according to the impact it had:

If you think the boss will not get affected to a larger extent, then make sure you do not create a hype of your own. Just be calm at that point or you yourself will be responsible for sinking the boat in the water.

11. Try and calm up the situation:

Do not let your anger ruin the situation. Be calm and accept the reality. Your attitude towards the matter will affect a lot. If you will frown and react, it will heat up the situation and will do no good to anyone, neither you nor the boss or the office’s atmosphere.

12. Know the behavior of the boss:

You almost might know the behavior of your boss at different situations and you may also know the reaction of your boss towards you, regarding the lie you told.

If it will be anger showered on you, then you must be prepared with that according to your wisdom.

Your behavior towards the boss should not give a hype to the situation instead should try to calm up the situation or it will only be going to harm you at the end of the day.

After you have been caught, be true immediately that yes, you did like this or that. Do not hide anything, especially when it is known to everyone in the office. Sometimes the anger on the other person is showered on some other individual.

So, make sure the anger of the boss at you is not affecting any other person in the office or it will also degrade your own image amongst the co-workers in the office.

14. Take the advice of others:

You can take help of your co-workers, friends who are really very close to you. Guidance will help you cope up with the situation in a better manner and wisely.

You may also consult someone who has already done something like this before and can seek to how he or she reacted in the particular situation.

15. Walk to your boss personally and talk:

You can also walk to the boss of your own and inform that you did wrong by telling a lie. This will help build up a differently fine image in the eyes of the boss.

Though initially it may make the boss angry, but somehow telling the truth always cools the situation at the end. So your truth will at the end help you only and you will be able to maintain the level of trust itself.

16. Do not give others a chance and speak it yourself:

In companies, the rumor spreads like a grape wine communication and if someone came to know the truth related to your matter, it may reach the boss flying immediately with added spices in it.

This is your duty to not let the truth turn into the rumor. For that you will have to walk and talk to the boss yourself rather than depending on others to explain to the boss.

So, above are the things that must be keep in mind for handling the situation while you are caught lying to the boss. Another thing is, one should be frank with the boss and if you will be frank, it will help you in getting out of the trouble very easily. You will not have to worry if you have a trustworthy and reliable employee-boss relationship.

If you already had any triffle with the boss, then at that time you will have to react very wisely in case you lied to the boss. It’s not that no one lies, but how you handle the situation is the concerned matter. So, try and handle the matter of your own and that too smartly.