This is a type of trick question that many interviewers ask their candidates so as to make them flustered. Asking such a question out of the blue, makes the candidate feel pressured and stressed.

The interviewer does not hope for a specific correct answer, but he wants an answer that is carefully crafted so that it is satisfactory for both the job details and the interviewer. Also, another intention of asking such a question is for the interviewer to know what kind of employee you were in your previous job.

So, by asking when were you most satisfied in your job, the interviewer wants to learn about the challenges you have experienced and wants to know what all measures you had to take to solve the problem. These are the following points that will help you to answer such a question effectively and will also help you to provide a satisfactory answer. 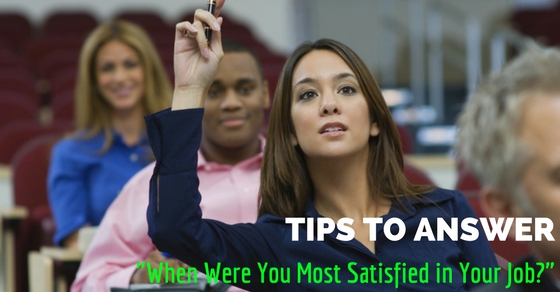 How to Answer “When Were You Most Satisfied in Your Job?

1. Understand why such a question is asked:

These type of questions are usually asked by the interviewer to measure the productivity level of the candidate. By asking when they were feeling the most satisfied during their previous jobs, the interviewer is trying to figure out instances where the candidate had been an ideal employee. Also, he is trying to figure out whether or not he is a hard worker and he strives towards his satisfaction and achievement, or is he a worker that likes to ride on other people’s success and achievements.

The interviewer knows that when a person is satisfied with their jobs then, they produce the best output that they can provide. They are also happy and are motivated to come to work every day and do the best they can at work.

Recounting specific situations where the candidate is fully satisfied and has shown his full potential, shows how well the candidate is able to do his job. Also, this also gives a sense of assurance to the employer that the candidate can become an asset to the company and will also easily mingle with the new work culture and the organisation.

2. Try to explain a challenge:

As mentioned before, when an interviewer asks you about a question regarding the most satisfactory moment in your job, then the first thing you have to do is to narrate a challenge that you have experienced in your previous job.

Try to set an example or narrate an anecdote that demonstrates your determination, thinking ability and the confidence to solve a problem. The challenge can vary depending on the situation. The challenges may include a form of disagreement between colleagues or team members, getting behind the set deadline, an unsatisfied customer and so on.

Try to explain how you tried to solve the problem and the various measures you took to tackle it and prevented it from becoming even worse.

For example: “ our company was having a slow month, so our department worked hard and started to pitch sales from various other customers and there was a positive development in the overall sales report of that month. There was an increase of sales by a factor of 61%”

3. Creating the perfect answer for such a question:

After you have gotten a gist of what the question is about, the next thing you have to do is to create a suitable response for the question asked. This can be done by the following methods:

Try to search more about the company and the position that you have applied for. Each company has its own unique work culture, office format and has their own specific level of job satisfaction.

This is necessary for a potential jobseeker or candidate to know what they are aiming for through the job that they have applied. Try to research through the various options, choices, motives and targets that the company has and try to frame an answer built around these facts and suggestions.

The second step of the process is to find instances and situations where you feel that you are most satisfied with your current job. In order to give the best response, you have to know what all instances have made you feel satisfied about the job. Try to find out anecdotes that shows that you were a good and ideal employee in your previous job.

After finding out the reasons that made you work hard and strive from your previous jobs, try to make a satisfactory answer to the question. Also, another point to be noted is to incorporate your previous job experience and the associated job satisfaction with the new job position that you are applying for. This is necessary to show that you can be a valuable employee to the company in the future and you will provide them with a high productivity and output.

4. Explain how the previous employer benefitted from you:

These are things that cannot be explained solely with the help of the resume. Try to show examples where you have helped in the development of the company. Show how you have worked and how was your work culture.

The interviewer will eventually have a good and a positive impression about you. These are the things that the interviewer would like to hear and appreciate, instead of just reading a resume.

For example: “After I started working in the sales department, I and my team were able to produce a 50% increase in sales last year”

This also shows that you are a team player and that you are not afraid to share the credits and laurels with others.

Many employers want to hire candidates who have the passion and determination to meet not only their expectations but also to meet the expectations of the company. They want to know that whether or not you will take pride in being a hardworking and a passionate individual.

Taking pride in your own work is necessary and is beneficial to strive and survive in such a competitive environment. They want employees that have a peak interest in getting the job done and also who loves the job. This also encourages the employee to develop himself into a more able and a reliable working individual. Such employees have high standards and expectation of themselves and they try to prove to others that they can be an asset to the company.

Do not prepare an answer that seems very fake and very hard to believe. The employer wants a certain amount of genuinely and surety in your answers. If the interviewer is a seasoned professional, then they would call out you for being exaggerating and dishonest. This can also lead to you failing the interview. So always keep in mind that the exaggeration should be kept up to a minimum.

Try to find ways where you can casually incorporate various job satisfaction examples, with regard to answering the question satisfactorily. Try to think about the various examples in which you have felt immense job satisfaction. Include instances where you have worked alone, or with a team depending on the description of the job that you have applied for.

Try to show a feeling of excitement and enthusiasm when narrating a job satisfying experience. Also, include any assignments or tasks that was solely appointed to you. The following instructions will show how you could match the perfect example with your answer:

Try to ensure that the example that you are going to state matches with the job description of the position that you have applied for.

Instead, frame your answer in such a way that even though you prefer to do work in solitude, you are more than excited in welcoming the idea of working together with other individuals as a part of a team. This shows that you are versatile and malleable according to the job demands.

Try to be discrete, accurate and precise:

While stating an example, try to be specific about the situation. Do not try to be vague and generic and just add a general statement on how you used to work at your previous job. This will not give much information to the interviewer about your work culture and practices and how you were as an employee. You need to show the employer and tell him how much worth you have as a promising and a reliable candidate for the job.

Try to produce instances and cases that shows how productive you were, or how you finished a project within the given deadline and also managed to get a satisfactory customer response. Make sure that the interviewer also gets an idea about the situation you have presented. Also, try to make the example understandable, short and simple. Nobody wants to hear an example that completely misses the point of the question.

“In my previous job I was working in the sales department as a member of the customer service team. The most satisfying moment in my job was when I was interacting with the customers. As a part of my job, I was able to directly and indirectly contact with the customers and try to help them in clearing doubts and other various issues related to the product and the company.

I tried to ensure that my service was satisfactory to them and that they were happy with my response. This gave me immense satisfaction, since I had used my knowledge and the information about the company to help them clear their doubts and provide them the best customer support if possible. I was rated as an excellent employee, most of the times, by the customers themselves when they were asked to give feedbacks about my service”

The answer speaks for itself, it shows that how you were able to be an able and a reliable employee both to the customers and to the company. Try to appeal how you fair as a potential employee to the company and how you can be a blessing in disguise to them. Try to show them that you are a boon rather than a curse. Try to give a satisfactory answer and you will be considered as a winner.