Most managers and workers think conflicts are detrimental to the working environment and can harm employees in several ways.

Even though the idea is true up to a certain extent, it can be understood as beneficial as well.

Most of us have seen conflicts lead to something hazardous like losing jobs, animosity, more discontent, and disagreement, etc. This is also one of the biggest reasons why some CEOs and bosses prefer to avoid workplace conflicts. 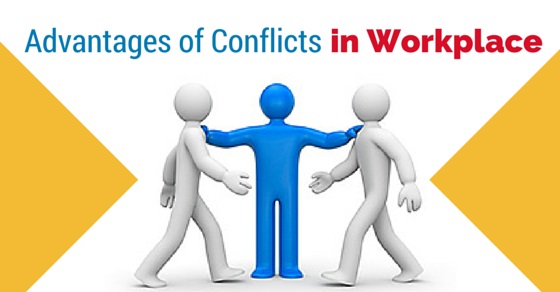 However, overcompensation is something that can become extremely dangerous. This happens when everyone belonging to a particular department at work has the same opinion on almost everything.

If we take Blackberry as an example, it will be easier to understand about advantages of conflict resolution at work.

Advantages of Conflict in an Organisation:

At one point, Blackberry was one of the biggest and fastest-selling companies all over the world.

Today it has been diminished to almost nothing. What the Blackberry executives did is that they didn’t want to understand that consumers prefer smartphones compared to business applications.

They did whatever suited their interests best. If a bit of dissension occurred, a difference could have been felt.

Nonetheless, in this post, we are going to tell you why workplace conflicts are sometimes good for the working environment. Keep reading to learn.

1. It encourages healthy debate and argument:

What conflicts do is that they encourage debate and competition which is good for almost any environment. Also, it improves team culture and allows people to learn more.

Here employees learn how to handle situations professionally without having to hurl any insults.

If you feel there is a particular idea that won’t work, don’t let it just pass by. Raise the topic and let people talk about it.

There are a couple of ideas that need some time to mature. Speaking of competition, friendly rivalry can boost motivation and push productivity.

2. Allows your team to work towards their goals:

With more workplace conflicts, you can expect your team to accomplish its goals in no time. This does sound surprising to most of us but it is very true.

When team members are putting up with disagreements and arguments at your workplace, they are automatically able to work towards the goals that should be reached. This happens mostly in the case of project-based goals.

What happens, in this case, is the team learns to deal with difficult situations and work in such a way that all challenges can be sorted.

3. Brings inside the working environment a sense of commitment:

Another benefit of conflicts is that it boosts a sense of commitment among team members and employees.

However, you should make sure that everyone has the chance to express themselves and say what’s on their mind.

It doesn’t matter if their opinions aren’t always positive. Your team members need to be aware of what is going on.

Conflicts are a vital part of work culture and they nourish your minds in several ways.

4. Clarifies all doubts and queries:

Conflicts are another interesting way to clarify all doubts. In an environment where ideas and opinions are not the same, the possibilities of conflicts are doubled. And it cannot be stopped.

Disagreements will occur no matter what. So it is best to allow conflict to occur. This conflict situation will not only clarify all doubts but also improve the work environment.

Your employees will learn how to respect and understand each other because of this purpose.

5. Removes all stress and anxiety:

One of the biggest advantages that come with workplace conflicts is that it takes away all your stress and anxiety.

People who are involved in the argument tend to become more relaxed after they have acted cathartic.

Therefore it is always advisable to let those emotions flow. Let people talk about their problems and what they feel like when they are around someone they don’t like.

This will create a calm environment in the future. Not only that, your employees will be able to work in a much better way after the conflict has been resolved.

Just make sure there is no physical violence during workplace conflicts.

Workplace conflicts are the best way to increase productivity. The advantages of conflict resolution are like, people belonging to a particular workgroup will naturally learn how to become more productive.

Instead of spending a lot of time recognizing the fact that a problem does exist, it is best to take immediate action, dealing with conflict.

This will get co-workers to cost more productivity and help people in your team to stay encouraged and motivated. You will see your group improving over time.

One of the most surprising benefits that come with workplace conflicts is that it leaves more room for changes to occur.

If you make the mistake of ignoring a problem like it doesn’t exist, things are never going to change. They will always be the same. This will lead to stunted growth and you will witness very limited chances of improvement in the environment.

When workers begin to show their differences, it is always a better idea to work through them. Once this has happened, only then will the stage be set for better changes to occur within the group.

Keeping the status quo could see as a path of very little resistance but if you can make it a point to struggle through it, then something positive will come out of it.

8. New ideas are created in the process:

With conflicts, new ideas are always created. You can always come up with new techniques and ideas when there is a disagreement in your workplace.

This is because a problem always allows something new to happen. So don’t always try resolving conflict in the workplace, the moment it occurs.

Let it stay and grow for a while. You will see things change and create on their own dynamically over time.

9. An opportunity to see things in a newer way:

If everybody agreed with everything, would there be anything new to learn about? Of course not!

But with the entry of conflicts, there are new reasons to check out different perspectives and learn about new techniques to handle new situations.

Some of the best ideas of the world have always come out of ashes and the process of solving conflicts and problems creatively will soon begin to reach a very satisfactory manner.

Working through disagreements and problems can often bring the best out of people. And this is exactly what conflicts do!

Their respect and understanding for each other improved significantly during this time.

People also get to know each other better. So next time there is a problem, both of them will know how to solve it.

11. Brings Up Difficult Issues To Surface:

When you are discussing a difficult situation with your clients and colleagues, it will somehow bring out a negative reaction from a co-worker. This will allow difficult problems to surface so that it can be solved.

Not just that, as a boss and a CEO you will learn how to deal with tough times so that the best can come out no matter what.

12. Leads to positive outcomes in general:

According to a survey conducted in the United States of America, 81% of the people happened to see positive outcomes when workplace conflicts occurred.

Nearly half of the people surveyed said they had a better understanding of their co-workers and employees.

Better working relationships and improved skills are also some of the biggest advantages that come with conflicts here. It leads to better performance and innovation as well.

Conflicts are quite a natural part of every environment. They usually are of two types. The first one is when there is a clash of personalities and the second one occurs when ideas and decisions do not match.

They are not good at any kind of workplace but one cannot deny that it is impossible to stop one. Even though it is a wise decision to control such disagreements from occurring and handling conflict at work, but it is also important to let them occur sometimes.

You have no idea how much you are going to learn from this. This will be a great opportunity for you to learn about human behavior and how people react to different situations.

Hopefully, this post has helped you understand the advantages of conflicts better. So the next time you see one occurring at your office don’t stop it right away. Let it grow into something, the results will amaze you. On that note, here’s wishing you good luck and hoping you can deal with situations better in the future.